Those folks who have been following me on Twitter, have probably seen some particularly gruesome puppet building posts.  I haven’t told anyone what I’ve been building because it was SECRET.

Now I can tell you.  Last night, I went to Seattle to John Scalzi’s reading as one of the surprise guests he’d promised for this leg of the tour.  I built a puppet of Papa Fuzzy from his book Fuzzy Nation 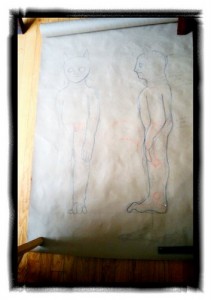 Here are is the first post with much delayed process shots.

For most puppets, I start by doing design sketches, but for this one Scalzi asked me to make it look as much like the Fuzzy on the cover as possible.

So,  I started by doing a full-scale drawing of the figure, with lightly sketched notes about where I thought my arm would go.  The novel says that Papa Fuzzy was the size of a large Maine Coon, which meant that he’d be 2.5 to 3 feet tall.  Using the painting by Kekai Kotaki as my guide, I worked out the proportions of Papa.  His body is four and a half heads tall, if you are interested.  Once I’d drawn how big he was with fur, I went back and drew a line to represent his body, minus fur. You’ve seen a wet cat, right? 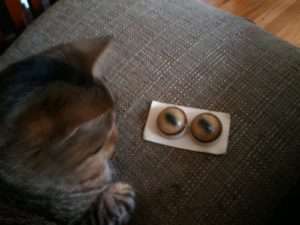 This drawing also allowed me to order the eyes. The drawing gave me a diameter of about 32mm and I went up to the next size to make sure I had a good fit up front.  A week after I ordered them, I called to see where they were. They were out of stock and hadn’t shipped yet.  This would have been useful information, earlier.  We wound up rounding up again, and they over-nighted 36mm eyes. Again, for the curious, these are “competition-quality” bobcat eyes. Here they are with Harriet for scale. 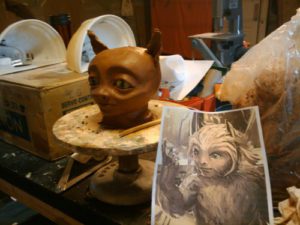 Because I know that the fur will mute a lot of the features, I exaggerated them somewhat.  The ears are just rough pieces of clay  for reference. You can see the calipers, under my sculpting wheel,  which I use to double-check dimensions as I work. 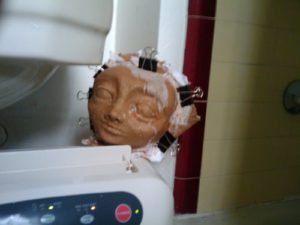 I made a two-part plaster mold of the Fuzzy’s head and then papier-mached into it.  Even though I planned on making the lower jaw out of foam, I still made it in mache so I had it for size reference.

While the Fuzzy dried, I clipped the two sides together so that they wouldn’t warp.  Then I mached the interior seam and trimmed the excess off. 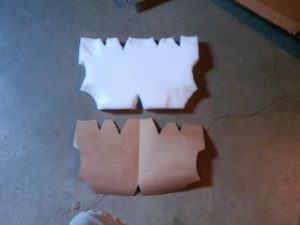 While that was drying, I worked on the body. Using scrap foam, I roughed out the torso, then made a pattern for it, that regularized the two sides.

The darts are to make the foam curve where I want it to.

My first draft was too small, to get my arm through because I’d forgotten to account for the thickness of the foam when I’d done my scale drawing. Easy to fix, fortunately, by just cutting another slightly larger. 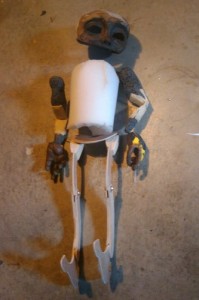 This is what I affectionaly call,  Robo-fuzzy. It’s the puppet’s armature without any of the flesh or skin in place.

The arms are simple closed-cell foam, carved into the shape I wanted. The elbows use athletic-bandage for the joint, adhered with 3m-77 spray adhesive.

If you try this, make sure the stretch rusn perpendicular to the arm, not parallel.  That way the arm won’t separate and you can deploy the stretch for a little bit of extra arm rotation.

The legs, feet, and hip-plate are plywood. The thigh and feet are a single thickness, but the calves are a triple thickness, with the middle piece acting as a spacer. 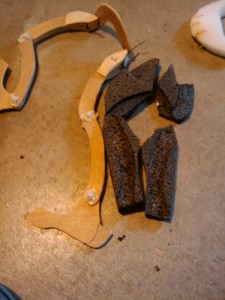 I use the same foam for the legs that I used for the arms, but the arms have no internal armature.

I first rough cut the legs then sliced them down the middle so that I could put a piece on either side of the wooden bones.

You can see that I cut out channels in the foam so that when it is all assembled the wood is completely encased. To assemble it I used hotglue on the wood of the legs and then heat welded the two sides of the leg together.

The joints are simple bolts, washers and lock-nuts.

The legs attach to the hips with braided dacron fishing line. 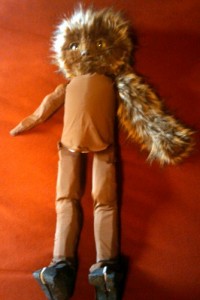 I trimmed everything on the body using scissors or the belt-sander to get the right shape.  Over the foam, I put a skin of brown spandex with the asisatance of Sandra Tayler on all the hand-stitching. There are three reasons to add a skin.

I’ve put fur on the head and arm and you can see the HUGE difference it makes in size. 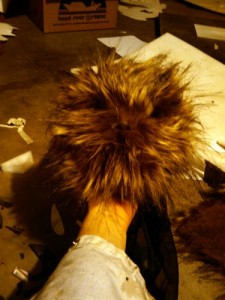 In fact when I first put fur on Papa’s face, it looked very much like a tribble.

There are nine different pieces of fur on his face, to accommodate the different directions that his fur grows.  Fur is relatively forgiving about hiding seams, which is good.

The eyes are actually installed in this photo, you just can’t see them. At all.

I used scissors and a razor to shave the fur and start to get it into the right shape.

I don’t like the hands I made, so I’ll blog about hands and feet after I get back from the Nebulas. Meanwhile, here is a photo of the Fuzzy at John Scalzi’s event. The photo below is by Jeff Slostad and is reprinted with his permission. I haven’t finished the detail work on the face, but I got it to the point of being presentable.

So far the puppet has about 45 hours of work, and I’m guessing I have between 8 to 20 left, depending on what goes wrong. Something always goes wrong.