This week, we have Maurice Broaddus to talk about his series The Knights of Breton Court, which is sort of “The Wire meets Excalibur.” So much love for these. Now, for full disclosure, Maurice is a friend and has edited my short fiction, which means that it was a relief that the man can write. Oh, boy, can he.

Here’s Maurice to tell you about his Favorite Bit:

There are two things you need to know about me:

1) I love crime novels. They’re what I read when I’m not doing research or keeping up with what’s going on in spec fic. They’re my literary comfort food. The Knights of Breton Court series in a lot of ways are crime novels masquerading as a fantasy trilogy (my love letter to George Pelecanos). The pacing of my books have more in common with a crime novel than they do typical urban fantasy, which frustrates some readers (but that’s part of my quiet squee-ing, writing for my own amusement). 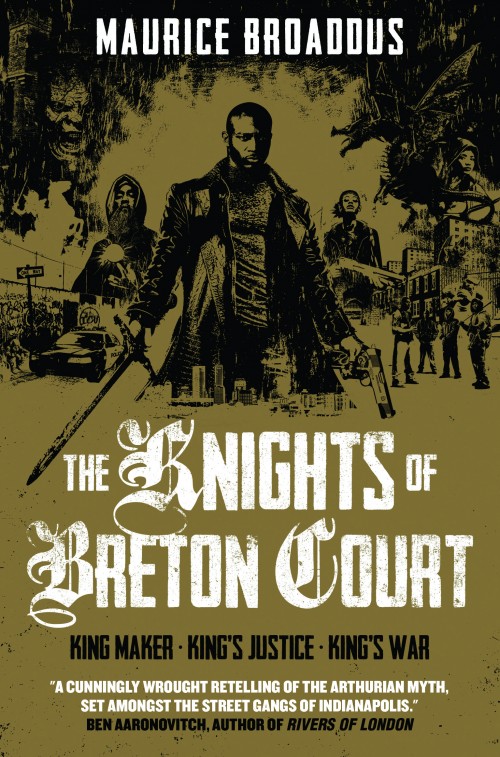 2) I’m a huge nerd. No, seriously. I consume more television in a month than entire families do in a year. I had to quit collecting comics when I hit the 20,000 mark because my wife refused to dedicate rooms of the house to piles of funny books. If you read my series, you’ll find nods to all sorts of things:

–Mage. One of my favorite comics of all time, I’m still waiting for Matt Wagner to pen the final installment series, The Hero Denied. If I could have squeezed in a reference to a magic bat, I would have (instead, I have my twin Caliburns as modern day stand in for Excalibur). On the other hand, it explains the appearance of red caps in book two.

–Camelot 3000. FTR, I never read the series when it debuted in the 80s, but finally got around to it while working on King’s War. This deflated my writerly balloon that I’d done something new with Tristan and Isoude, thinking I was doing something new by making them a lesbian couple.

–The Wire. I pitched the Knights of Breton Court series as “The Wire meets Excalibur” so you can imagine how happy the cover of my omnibus makes me. And, yes, I did a not very subtle tribute to one of the characters in The Wire (Omar says what?), making her my lady of the lake.

–Excalibur. I would have said Merlin (aka, Smallville in King Arthur’s Court), but I wasn’t a fan of the series. However, my brother and I were huge fans of the movie Excalibur. My brother enjoyed befuddling teachers, Sunday School as well as high school ones, by answering questions by reciting Merlin’s spell from the movie. It was the inspiration of the “dragon’s breath” sequence in King Maker.

But my truly favorite bit comes down to the characters. When people ask me who my favorite character is, folks expect me to cop to a love of my “magical redneck” Merle (and his non-stop argument with his squirrel companion, Sir Rupert). But I’d have to say Green and then Lott. Each of the books features a key knight: The Green Knight (King Maker), the Red Knight (King’s Justice), and the Black Knight (King’s War). Green is my variation on the tale of the Green Knight, except here he’s a street soldier. He’s not interested in rising in the ranks or leading his own crew, he simply loves “the game.” I have no idea why I loved writing him so much, only that he made me smile whenever I wrote him (even during “the razor blade” scene).

But the character at the heart of the book is Lott. Starting in Book II, King’s Justice, he became the character I punished the most and rooted for the most. Ultimately, that’s my favorite bit: re-creating the folks and life in my neighborhood. Each page of the book is soaked with characters and lives and situations I know. Tragic and funny and hopeful, that’s what the Knights of Breton Court is for me.

The Knights of Breton Court: amazon

Maurice Broaddus has written hundreds of short stories, essays, novellas, and articles.  His dark fiction has been published in numerous magazines, anthologies, and web sites, including Cemetery Dance, Apex Magazine, Black Static, and Weird Tales Magazine.  He is the co-editor of the Dark Faith anthology series (Apex Books) and the author of the urban fantasy trilogy, Knights of Breton Court (Angry Robot Books).  He has been a teaching artist for over five years, teaching creative writing to elementary, middle, and high school students, as well as adults.  Visit his site at www.MauriceBroaddus.com.

4 thoughts on “My Favorite Bit: Maurice Broaddus talks about THE KNIGHTS OF BRETON COURT”