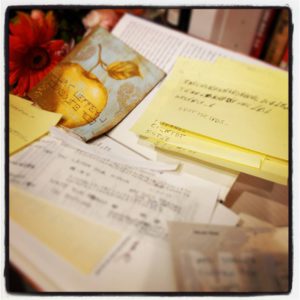 Today, I’ve already had a couple of people come up to me with the correct passphrase for my roving launch party. Here is where I should make it clear that though I said the party is tomorrow, it’s actually all weekend. Except that tomorrow is the day that I’ll be in costume.

Perhaps it might be helpful for you if I talk about a couple of different types of ciphers and codes and the ways that spies passed messages back and forth. Okay…here’s an excerpt, which I hope you’ll accept as being out of context.

Mrs. Richardson asked, “Are there really codes based on the weather?”

Ben laughed, and a bubble of amusement floated up from Merrow. Ben said, “Th e weather. Fish. Th e number and length of pauses you take in a sentence. I once knew a fellow who could stammer in Morse code. It was quite impressive. Another woman used the length of stitches in her dresses to carry messages. I used to carry cigars that had onionskin paper tucked inside. Lived in fear of grabbing the wrong one and smoking my secret message.”

“Right!” Ben rubbed his mouth, grinning. “We had a live drop who signalled that he had a message waiting by the number of pastries in the window. You had to let him know you were the contact by ordering a specific grouping of pastry. Damn good pastries. Pleasantest password exchange I’ve ever had to do.”

So what’s a live drop? That’s when you actually talk to your contact, usually through an exchange of passwords. Coming up to me and giving me the passphrase from the roving launch party post, will trigger an exchange. An exchange. Right. Delivering the passphrase means you’ll get something in return.

It might be written in plain text. Sometimes it’ll be a cipher.

A cipher is when numbers, letters, or symbols are substituted to create text that is unreadable except to someone who knows the key.

Common ciphers still abound in everyday use. One example, in use on internet forums today is rotational 13. Most people know that as rot13. Meaning that it’s a type of Caesar cipher in which the alphabet is rotated, in this case by 13 spaces. Once you rotate the alphabet A becomes N and so on. Now, you can do a Caesar with any number of rotational spaces.

Cracking a common Caesar is fairly easy to crack by brute force, which means that you just keep trying rotations until you run through them all. Above that in difficulty level is a “keyed Caesar” in which a phrase goes at the beginning of the alphabet. Every letter not used in in the key get rotated to the end. So, I was going to do one in which a rot7 returned “E tu Brute” and then if you said that passphrase to me, I would hand you the next code and say, “Caesar rot in hell.” As an example, the rotation then became INHELABCDFGJKMOPQRSTUWXYZ.  Rather sadly, as fun as that bit of verbal humor was, in trials no one got it.

Of course, there are also skip codes, book codes, columnar codes, double-codes like the Navajo code talkers who were writing messages in Navajo which was then run through a cipher as well. Kinda a there’s a ton of cool stuff, huh?