It is always a bit unnerving to use real historical figures in fiction, especially someone as well-known as The Prince Regent. Because the Regency period is named after him, it is easy to think that he was an admirable figure in the same way that Queen Victoria was. Alas… 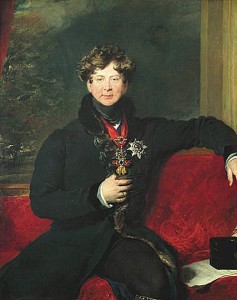 He was regarded as self-indulgent, extravagant, and an adulterer. With good reason, since he made no secret of his mistresses and was constantly living well beyond his means to the point of needing to ask Parliament for more money. He spent 10,000 pounds per anum just on clothing.

He was, however, a great patron of the arts and encouraged much of the look of the Regency period. Among the people he was a fan of was Jane Austen.

The admiration was not returned. In a letter to Martha Lloyd, Miss Austen wrote:

“I suppose all the World is sitting in Judgement upon the Princess of Wales’s Letter. Poor woman, I shall support her as long as I can, because she is a Woman, & because I hate her Husband — but I can hardly forgive her for calling herself “attached & affectionate” to a Man whom she must detest — & the intimacy said to subsist between her & Lady Oxford is bad — I do not know what to do about it; but if I must give up the Princess, I am resolved at least always to think that she would have been respectable, if the Prince had behaved only tolerably by her at first. –“

So how does he appear in Glamour in Glass?

The Prince Regent smiled and patted her hand where it lay on the dark blue cloth of his sleeve. 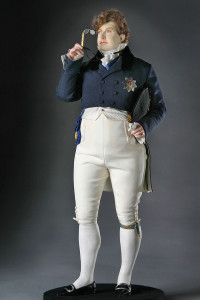 The portrait above is from 1814, the year that Shades of Milk and Honey, takes place. Glamour in Glass begins on December 30, 1814 so he would look very much like that.

In this mixed media figure, you get a sense of how he would appear in the style popularized by Beau Brummell. Buckskin trousers and a blue coat.

Smiling, the Prince Regent adjusted the sleeve of his coat, which was, Jane was startled to note, cut from superfine cloth. [1. Superfine is a general fabric term related to quality, but during the Regency it invariably referred to the woolen broadcloth used in coats.]

For further reading on gentlemen’s fashion, may I recommend Between a Gentleman and His Tailor

1 thought on “Glamour in Glass: The Prince Regent”