Tracy Townsend is joining us today with her novel The Nine. Here’s the publisher’s description:

In the dark streets of Corma exists a book that writes itself, a book that some would kill for…

Black market courier Rowena Downshire is just trying to pay her mother’s freedom from debtor’s prison when an urgent and unexpected delivery leads her face to face with a creature out of nightmares.  Rowena escapes with her life, but the strange book she was ordered to deliver is stolen.

The Alchemist knows things few men have lived to tell about, and when Rowena shows up on his doorstep, frightened and empty-handed, he knows better than to turn her away. What he discovers leads him to ask for help from the last man he wants to see—the former mercenary, Anselm Meteron.

Across town, Reverend Phillip Chalmers awakes in a cell, bloodied and bruised, facing a creature twice his size. Translating the stolen book may be his only hope for survival; however, he soon realizes the book may be a fabled text written by the Creator Himself, tracking the nine human subjects of His Grand Experiment. In the wrong hands, it could mean the end of humanity.

Rowena and her companions become the target of conspirators who seek to use the book for their own ends.  But how can this unlikely team be sure who the enemy is when they can barely trust each other? And what will happen when the book reveals a secret no human was meant to know? 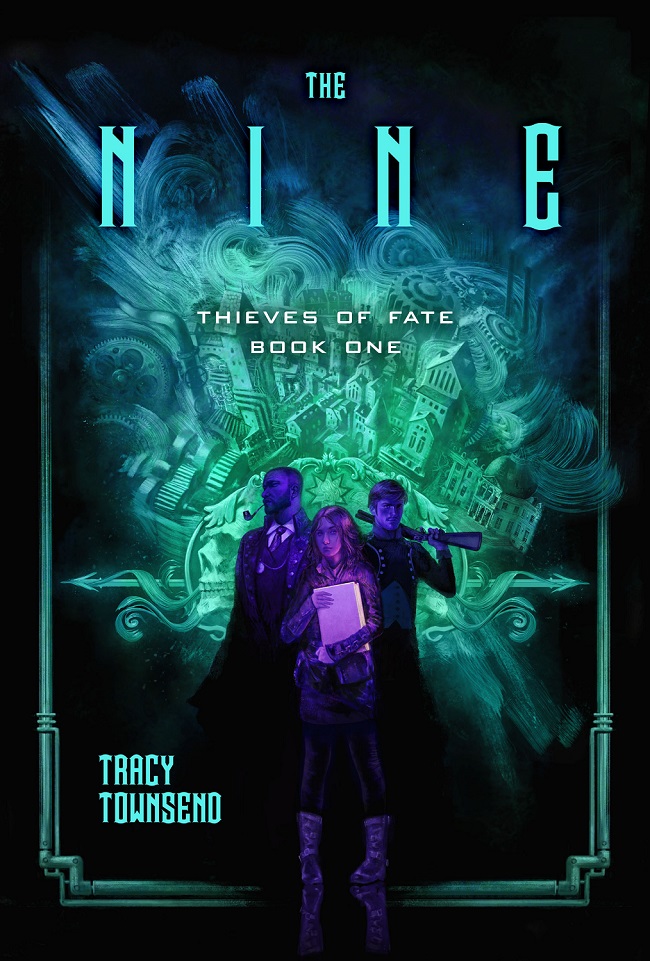 The Bulwer-Lytton version of how I started my debut fantasy, The Nine, would have me writing on a dark and stormy night. After all, it is a dark gaslamp fantasy, replete with corruption, conspiracy, and monstrous creatures of the night. But the truth is, I wrote the first scene of it on an unseasonably warm afternoon in March 2009, racing along in a burst of excitement that struck entirely without warning in between grading papers for an American literature class. (Muses are rude that way: untimely, even in their best moments.) I hacked away at the vision I’d had — a girl racing away from some dangerous scene, empty-handed, though she ought to have been carrying something, and bursting into an alchemist’s shop after dark. After a while, I sat back and stared at the pages I’d written. Who were these people, meeting by chance in a dusty old dispensary? What had the girl been running from, and what had she lost? Why had the man let her in after the shingle was turned, and why the wariness in his baritone voice? Not sure what I’d made — or if I’d made anything at all — I tucked the pages deep in my hard drive and before long forgot all about them.

Years later, I found that file by accident as I readied myself (on a properly cold and blustery October evening) for my first NaNoWriMo. I poked at the scene like a newly-discovered bruise, seemingly sprung from nothing. There was an ache somewhere inside it, an old, invisible pain throbbing toward its bones. I read the scene once. Twice. By the third time, I knew I was in love.

That first-written scene of The Nine is still in the book today, virtually unchanged. It’s in chapter ten, and it will always be my favorite bit.

Guttersnipe courier Rowena Downshire has just been robbed of an urgent, mysterious delivery and now faces with defiance and dread the man to whom the package was bound — the inscrutable Alchemist of Westgate Bridge. She’s battered and bloodied. There’s every reason to believe this failure will see her fired, thrown back out on the street or, even worse, back behind the bars of Oldtemple debtors’ prison.

She tries to apologize, but of course, it’s not that simple.

She considers, and finally answers. “Downshire, if it please you.”

“I can’t imagine what your name has to do with my pleasure, Rowena Downshire.”

I love this exchange because it’s where the characters taught me to see them for who they really are. Here I had two cagey, thick-skinned souls brought together by chance, their conversation a prowling, circling, wary engagement. They were wild animals crossing paths, taking only the most halting steps toward one another. They would probe each other’s wounds, bind them up, tear a few new ones, and maybe, just maybe, their scars would heal over properly. Just this once, as they never had before.

Every writer has certain pet subjects. There’s value in knowing when to lean in close to the story with them, letting your breath fog the windows of the edifice your words have built. I love unspoken things, and awkward beginnings, and unhealable wounds, and found families, and redemption arcs, and morally gray protagonists, and deadly, dark, competent people waiting for you to underestimate them. So of course I fell in love with these two. I could see where they were headed. I hoped they would let me come along. I longed to see what would happen to their glimmer of hope in an otherwise sooty setting.

The trouble with dark stories — with their twisty plots and crapsack universes and anti-heroism and all of that — is how many of them trade everything else away to make the darkness happen. Too many of them miss the point. Human beings tell stories because, sometimes, they are the only places where it feels safe to believe anymore. The world has taken something from each of us. A story is a writer’s promise to give something essential back. So are the people they give us in them.

“I can’t imagine what your name has to do with my pleasure,” the Alchemist tells Rowena. He’s not wrong. They find precious little pleasure in the journey that lies before them. But they do find each other.

Tracy Townsend holds a master’s degree in writing and rhetoric from DePaul University and a bachelor’s degree in creative writing from DePauw University, a source of regular consternation when proofreading her credentials. She is a past chair of the English Department at the Illinois Mathematics and Science Academy, an elite public boarding school, where she currently teaches creative writing and science fiction and fantasy literature. She has been a martial arts instructor, a stage combat and accent coach, and a short-order cook for houses full of tired gamers. Now she lives in Bolingbrook, Illinois with two bumptious hounds, two remarkable children, and one very patient husband. Her debut novel, The Nine, is the first in the Thieves of Fate series, published by Pyr November 14, 2017. You can find her on Twitter at @TheStorymatic and on the web at www.tracytownsend.net.