Jim C. Hines is joining us today with his novel Terminal Alliance. Here’s the publisher’s description:

In his hilarious new sci-fi series, Jim C. Hines introduces the unlikely heroes that may just save the galaxy: a crew of space janitors.

The Krakau came to Earth to invite humanity into a growing alliance of sentient species. However, they happened to arrive after a mutated plague wiped out half the planet, turned the rest into shambling, near-unstoppable animals, and basically destroyed human civilization. You know—your standard apocalypse.

The Krakau’s first impulse was to turn around and go home. (After all, it’s hard to have diplomatic relations with mindless savages who eat your diplomats.) Their second impulse was to try to fix us. Now, a century later, human beings might not be what they once were, but at least they’re no longer trying to eat everyone. Mostly.

Marion “Mops” Adamopoulos is surprisingly bright (for a human). As a Lieutenant on the Earth Mercenary Corps Ship Pufferfish, she’s in charge of the Shipboard Hygiene and Sanitation team. When a bioweapon attack wipes out the Krakau command crew and reverts the rest of the humans to their feral state, only Mops and her team are left with their minds intact.

Escaping the attacking aliens—not to mention her shambling crewmates—is only the beginning. Sure, Mops and her team of space janitors and plumbers can clean the ship as well as anyone, but flying the damn thing is another matter.

As they struggle to keep the Pufferfish functioning and find a cure for their crew, they stumble onto a conspiracy that could threaten the entire alliance… a conspiracy born from the truth of what happened on Earth all those years ago. 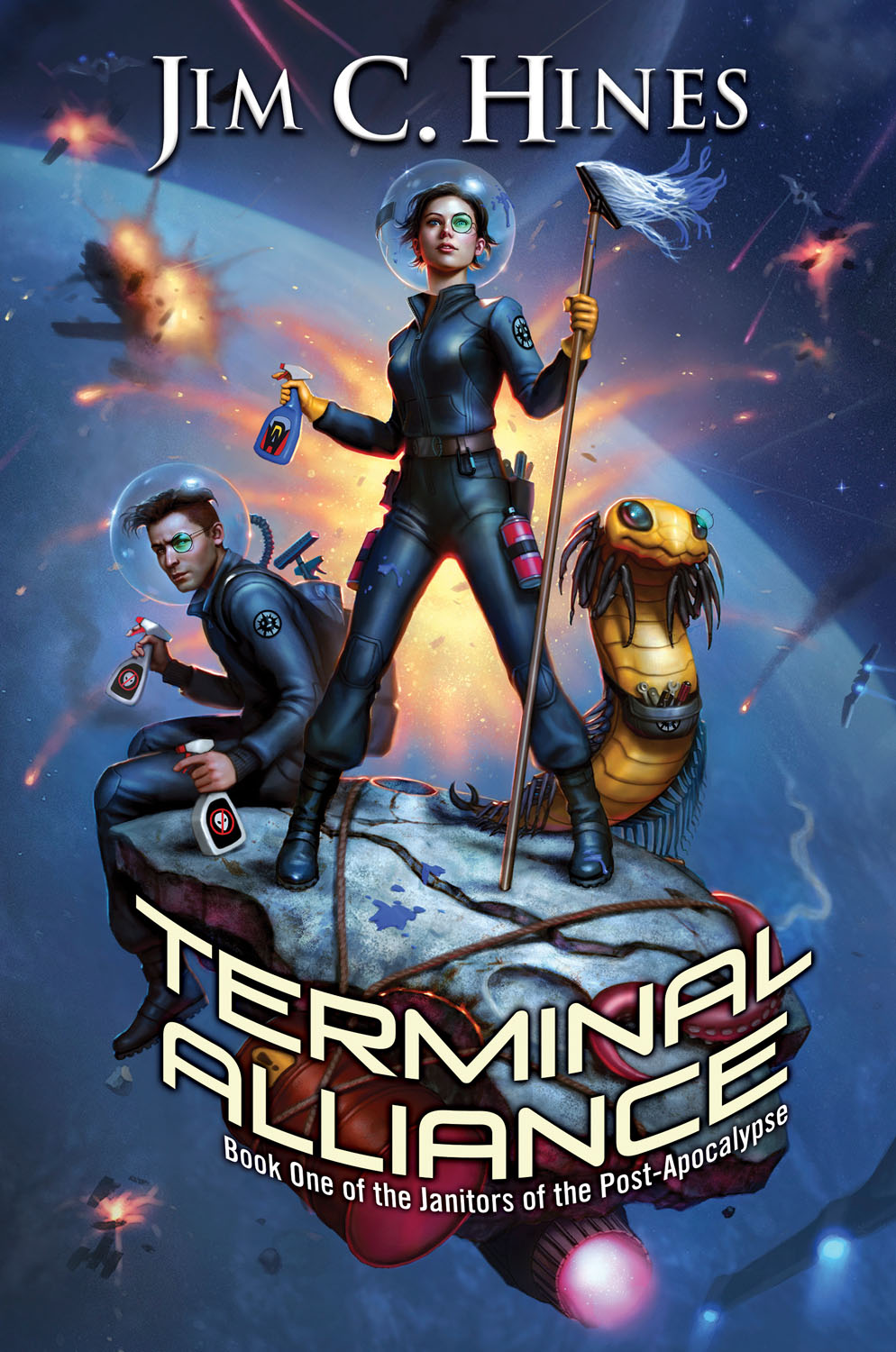 Humans had pretty well wiped themselves out when the alien Krakau arrived on our planet. The Krakau took it upon themselves to rebuild the shambling, feral remnants of humanity the best they could.

At the time of Terminal Alliance, roughly ten thousand humans have been “restored,” meaning their intelligence is close to pre-apocalypse levels. But they’re not quite human like we are today. Their bodies have been changed both by the plague and by the Krakau cure, and…well, they’re just not the brightest species in the Alliance.

Marion “Mops” Adamopoulos and her Shipboard Hygiene and Sanitation team end up in command of their ship, the EMCS Pufferfish. In between learning how to fly the damn thing and fighting off alien attacks, they stop to grab a quick lunch. Or maybe dinner. They don’t really make a distinction. During this brief interlude, they end up talking about what it means to be human:

“They fixed us,” Kumar continued. “They give us jobs, purpose, even our culture. We call ourselves human, but are we? Or are we Krakau? Maybe we’re something in between. Krakuman?”

“I am not calling myself Krakuman,” snarled Wolf.

“Kumar has a point,” Mops said, before this could escalate further. “Intellect, creativity, reasoning…we consistently score lower on every test than pre-plague humans. Whatever humanity was before the plague, we’ve changed. But we are human.”

“How do you figure?” asked Kumar.

“Because we have to be.” Mops studied her team. They were exhausted. Anxious. Scared, though she doubted any of them would admit it Her team was trained to eradicate mold and fix clogged water filters, not battle Prodryan fighters. “Because we’re what’s left. Ten thousand or so reborn humans, with maybe a half billion surviving ferals back on Earth.”

Kumar frowned. “I’m not sure I follow your logic.”

“It’s not about logic.” Mops removed her empty food tube and used her thumb to wipe a single drop of gray sludge from the edge of her port. Her stomach felt bloated and hard, but the pressure would ease within an hour. “We were born of Earth. ‘Human’ is our word. Our history. Our connection to each other. Nobody gets to tell me I’m not human.” Her eyes sought Kumar’s. “Nobody else gets to tell us what that word means.”

I love this exchange. I love how the chaos of alien attacks and conspiracies forces them to reexamine their assumptions about everything, including who and what they are.

It’s not a question any of them have ever really faced. They were cured as adults, and have little memory of their life before. Their conversation here is reminiscent of a kid discovering their independence from their parents for the first time.

You know, if their parents were a bunch of alien squid.

The rest of the galaxy looks at humans as little better than animals, and they’re not entirely wrong. Our civilization pretty much destroyed itself, and now we’re mostly serving as soldiers for the Krakau Alliance. Savages who are one minuscule step up from beasts.

Mops and her team aren’t perfect. They’re not remotely qualified to fly a ship or fight hostile aliens or investigate a conspiracy. Everyone else in the galaxy would expect them to fail, and to fail catastrophically. Basically, they’re the underdogs, and they’ve always known it.

In Mops’ world, the word “human” has always carried an implicit sneer. To be human is to be inferior. But in this moment, their sense of who they are begins to shift. It’s not a Very Special Episode of Space Janitors where they discover they’re so much smarter and stronger than they thought, and all they had to do was Believe In Themselves. They’re still underdogs. They’re still completely in over their heads.

This is a moment of reclamation. Mops and the rest know they’re inferior in many ways. Now, for the first time, “human” is also a source of pride and strength. In some ways, that change is at the heart of the entire trilogy.

Well, that and jokes about alien plumbing.

If there’s one defining trait about humanity that holds true both now and in the future of the Janitors of the Post-Apocalypse trilogy, it’s that we just don’t know when to quit.

God help the rest of the galaxy.

Jim C. Hines is the author of the Magic ex Libris series, the Princess series of fairy tale retellings, the humorous Goblin Quest trilogy, and the Fable Legends tie-in Blood of Heroes. His latest novel is Terminal Alliance, book one in the humorous science fiction Janitors of the Post-Apocalypse trilogy. His short fiction has appeared in more than 50 magazines and anthologies. He’s an active blogger, and won the 2012 Hugo Award for Best Fan Writer. He lives in mid-Michigan with his family. You can find him at www.jimchines.com or on Twitter as @jimchines.