Stacey Berg is joining us today with her novel Regeneration. Here’s the publisher’s description:

The world is ready to be reborn…

Protected by the Church for four hundred years, the people of the City are the last of humanity—or so they thought. Echo Hunter 367, made to be faithful to the Church and its Saint at all costs, embarks on what she’s sure is a suicide mission into the harsh desert beyond the City. Then, at the end of all hope, she stumbles on a miracle: another enclave of survivors, a lush, peaceful sanctuary completely opposite of anything Echo has ever known.

But the Preserve has dark secrets of its own, and uncovering them may cost Echo more than just her life. She fears her discoveries will trigger a final, disastrous war. But if Echo can stop the Church and Preservers from destroying each other, she might have a chance to achieve her most impossible dream—saving the woman she loves. 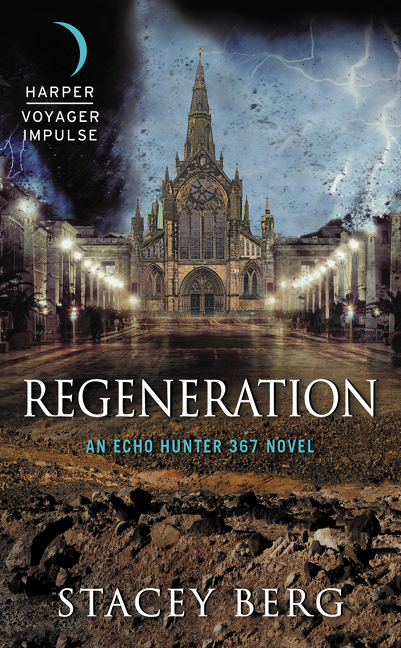 My favorite bit of Regeneration is a scene between the main character, Echo Hunter 367, and the younger hunter Gem. In the run-up to this exchange, Gem has been standing guard in the Church’s sanctuary, watching over the Saint on whom their lives depend. Echo, who would normally claim that assignment for herself, instead has made up an excuse to stay away. Now Gem calls her on it:

Gem appeared at the door from within. “You have been avoiding the sanctuary.”

“My services have been required for storm preparations.”

“If your other duties permit, perhaps you could assist here as well.”

The request sounded strange to Echo, coming from the girl who had been so arrogant. “You have always performed adequately without my assistance.”

A pause, then: “Perhaps you are right. One can watch as well as two; there is no sense wasting a resource.”

“Is that all it is to you? A matter of resources?”

Gem cocked her head. “What else should a hunter consider?”

Friendship. That we matter to one another. But hunters did not speak of such things. Then Echo saw in Gem’s face that that was what she offered, like a handhold for a slipping grip, if one dared to reach for it . . . Echo couldn’t find her voice.

I love this bit because when I started the book, I knew that romantic love was at its heart, but I had no idea that other relationships would be nearly as important. Yet friendship became a key theme throughout the story. Echo and Gem are hunters, women created to guard the Church and fulfill their duty without question; their personal needs and desires are of no consequence. In Dissension, the first Echo Hunter 367 book, Echo started as Gem’s teacher, but the younger woman quickly grew into a rival who first challenged, then ultimately defeated Echo. By the end of that story, Echo regarded Gem as the perfect hunter Echo never could be—but Gem gained a kind of admiration for Echo, too. In Regeneration, the two women appear to be working towards a common goal on behalf of the Church, yet it’s not clear to Echo what Gem really feels—or if she cares for anything at all beyond her duty.

This uncertainty gave me a great opportunity to explore the ways in which Echo has and hasn’t overcome her own limitations. For example, in the scene above, she is able to recognize her desire to mean something to Gem. She is even brave enough to challenge Gem to admit what Echo already has learned: that hunters care about each other deeply. And perhaps alone of all hunters, Echo can glimpse what Gem, once so hard and cold, is trying to offer her.

And yet—and yet. At this point in the story, Echo is not quite able to speak such words out loud. She doesn’t know how to accept the hand that Gem is holding out to her. The moment that passes here is for me one of the most poignant in the book.

But we know Echo, and we know that she’ll keep after it, right until the end. Her friendship with Gem is a subplot, not the main event, but Echo has to figure it out before she can resolve the major events in the rest of the story. So this scene matters, the way friends matter to one another. It feels real to me. This bit isn’t a conversation between characters who understand themselves perfectly because they’ve spent years examining their own lives and psyches. Instead, it’s a snatched intimate moment between two people who are just discovering themselves, just learning to be human, and doing it on the fly in the middle of the end, or the beginning, of the world. That’s why it’s my favorite bit.

Stacey Berg is a medical researcher who writes speculative fiction. Her work as a physician-scientist provides the inspiration for many of her stories. She lives with her wife in Houston and is a member of the Writers’ League of Texas. When she’s not writing, she practices kung fu and runs half marathons. She is represented by Mary C. Moore of Kimberley Cameron & Associates. You can visit her at www.staceyberg.com.