Sherri Smith is joining us today to talk about her novel Follow Me Down. Here’s the publisher’s description:

Mia Haas has built her life far from the North Dakota town where she grew up, but when she receives word that her twin brother is missing, she is forced to return home. Back to the people she left behind, the person she used to be, and the secrets she thought she’d buried.

Once hailed as the golden boy of their town, and now a popular high school teacher, Lucas Haas disappears the same day the body of one of his students is pulled from the river. Trying to wrap her head around the rumors of Lucas’s affair with the teen, and unable to reconcile the media’s portrayal of Lucas as a murderer with her own memories of him, Mia is desperate to find another suspect.

All the while, she wonders: If he’s innocent, why did he run?

As Mia reevaluates their difficult, shared history and launches her own investigation into the grisly murder, she uncovers secrets that could exonerate Lucas—or seal his fate. In a small town where everyone’s lives are intertwined, Mia must confront her own demons if she wants to get out alive. 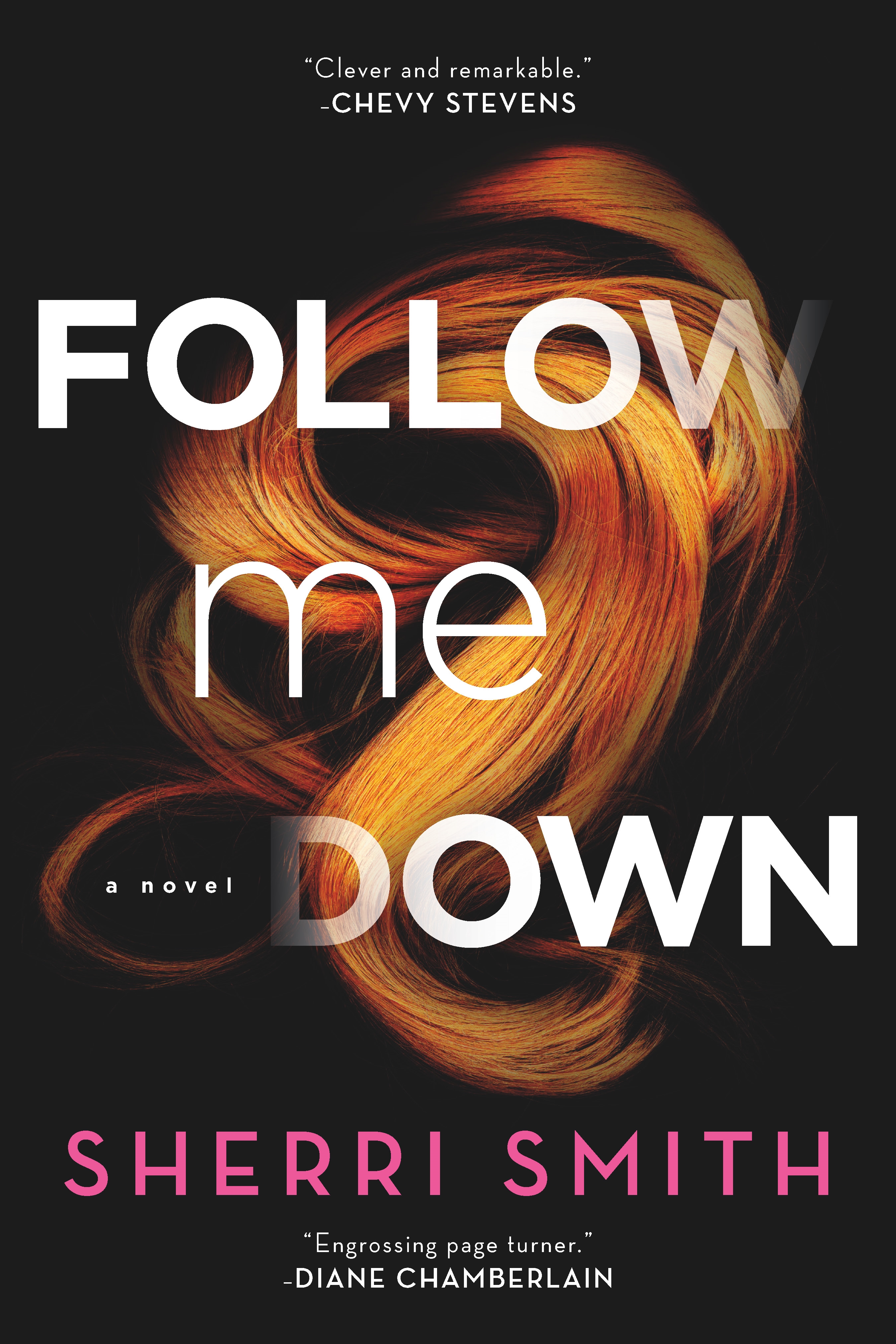 My favorite bit from FOLLOW ME DOWN is a scene that happens after Mia goes to visit her toxic mother who lives in a care home (pages 52-55). Mia has run back to her car, and in an emotional frenzy, rips into a make-up bag full of pills she brought for this trip back to her hometown.

It’s that teetering moment when Mia breaks her recent recovery from a pill addiction. What I specifically like about this scene is how it connects bad parenting to a certain level of adult misery and self-hatred. Pills (or other addictive substances) tend to take the edge off of this and seeing her mother, confronting their tangled history, provides her with just the right excuse to cave.

In this scene, Mia gives her account of how she started using in college as a social crutch or study buddy, and progressed to stealing from a hospital dispensary where she worked as a pharmacist. She likes to maintain an image of success but inwardly struggles to keep her addiction a secret.  Even during her shaky bouts of sobriety, she tends to isolate herself because she feels a controlled environment gives her the best shot at self-restraint.  But now that she’s been forced to return to home to the mother she left behind, to look for a missing brother who might be a killer, everything has come crashing down.

The pills win out.

“Why not? Why don’t you have a husband?” Her voice went high into a schoolyard taunt, but was too rough to pull it off, so she sounded like a seven- year- old with bronchitis.

“Haven’t met the right one yet.”

She turned away from her canvas and faced me.

“Maybe if you dressed nicer.” She started jabbing her paintbrush hard into the Styrofoam plate and walked toward me. The plate balanced on her fingertips. “I think you would look good in ruby red.”

She bent in close, poised over me, so that I was nose to nose with her. Cracker dust dotted her lower lip. For a second I thought she was going to kiss me, and I tried hard not to shrink back. Her eyes narrowed, she made an uh- huh sound like she’d answered some question she’d posed in her mind, and reflexively my lips curled up. She knows. She knows that I did this to her. The truth was somewhere in her mind, scurrying around inside one of her brain’s many hollows, and one day she’d catch it. I was sure of it.

Then Mimi’s hand snapped back fast, her eyes went dark, and she wielded the paintbrush like a maestro’s baton, bringing it down in a spatter of rusty-red slashes. Running the brush all over the front of my white V- neck.

“Mimi, stop.” I stood up, forcing her to step back.

“But you look so much better in red.” I caught her by the wrist as gently as I could, but this turned out to be wrong thing to do. She dropped her plate of paint upside down in the grass, pulled free, shrieked loud enough the birds scattered, and started to stab her brush over and over into her painting, tearing up the canvas. “Look at what you’ve made me do.”

The nurse came running out. “Are you hurt?” She looked at my chest in horror. “I’m fine. I’m fine. It’s just paint.”

The nurse turned her focus to Mimi, trying to calm her as I made a run for it back to my car.

Before I could even slip the key into the ignition, I ripped the red makeup bag out of the glove compartment. Unzipped it, turned it upside down, scattered the orange pill bottles on the passenger seat, and read the labels, quick as a savant. There was a little of everything, Xanax, Ativan, Valium, Adderall, Ambien, Percocet. Don’t think about it! Don’t think! My mouth watering, I uncapped the bottle that would best blur the edges. Closed my eyes and enjoyed the chalky, bitter taste rolling down my throat.

I was a pill popper. Lately, a recovered pill popper. Though maybe “recovered” was a little too hopeful; I did bring the stash I could never force myself to flush. It started in college. A BZP at a party, and I was smooth- talking my way into a crowd much cooler than myself. A social crutch that self- perpetuated, and soon I needed an Adderall study buddy or an Ambien for a much-needed marathon sleep. More BZP.

I became fluent in doctor shopping, knew all the symptoms for whatever ailment would get me my desired prescription. I pillaged medicine cabinets at parties. From there, it seemed a natural progression to a degree in pharmaceuticals.

My first job was a residency at Northwestern Memorial (one of the top-ten highest-ranking hospitals in the US—impressed yet?). I did rounds, taking medication lists from patients. Tried to soothe them in their worst moments. I loved elderly patients the most. I was their purveyor of goods that had, up to this point, kept them alive. “You’ll get your heart medication right here at the hospital, OK? Be right back.” I had to think under pressure. Use my degree. Analyze dosage and interactions. I made recommendations to the physicians! I was trained in Code Blue!

But of course a busy, overworked hospital dispensary was too tempting. A pill popper’s Shangri-la. I started double- dipping, just a pill here and there. The chief pharmacist, a cheery woman with big hair and a troubled son (code for drug addict), who referred to herself as my mentor, began to suspect what I was up to. She called me into her office one after noon, a cubby of a room wallpapered with order forms, and asked me point-blank if I was stealing.

“Can I check your pockets?”

We spent a few minutes playing stare- down. If she checked my lab pocket, she’d find two tablets of Oxycontin. If she didn’t, she wouldn’t have a scandal on her hands. She wouldn’t be questioned on her own ability to run things. “Why, Mia? You have so much promise. Why are you doing this to yourself?”

The way she looked at me, with such stinging parental disappointment, I could feel myself shrink down to figurine size. I couldn’t answer. How did I describe the gnawing feeling that thrummed underneath everything I did? How pills made it easier to live with myself, with the secret I was keeping? An offer was made that we both pretended was born solely out of her goodwill: if I went into a program and got help, she wouldn’t report me to the state licensing board. I agreed, and she shuffled me out of the hospital like a broken IV pole.

I finished the program. Moved into my new apartment. Found a new job as a glorified cashier with relentless, terrible hours. I started jogging, a hamster-wheel endeavor for that runner’s high that kept eluding me beyond a few fleeting gasps of well-being.

So it had been two years since I’d pulled out my little red makeup bag. Two long years that I’d fought against my plentiful triggers.

I should really throw the pill up before it starts to dissolve in my hungry stomach acid and works its way into my bloodstream. Before it makes my neurons fizz. I should zip the bag back up and toss it in the next Dumpster. I eyed the bag like it was a baited animal trap. Like the bag itself was the bad influence. I stuffed the pill bottles back inside. Ordered myself again to throw up.

But I didn’t. I was looking forward to the fizz too much. Instead I put the makeup bag back inside the glove compartment. Flopped back against the headrest, closed my eyes for a second or two, then started to drive.

And now there I was.

It’s quite a pivotal moment because from here Mia goes forward in her search for her brother under the jumbled influence of pills. She tells herself she knows what she’s doing (she’s a pharmacist after all,) and her misuse leads to all kinds of havoc, and pushes her deeper into her psychological hell.

But it’s not ALL bad. The pills also give her an advantage she wouldn’t otherwise have to find the brother she’s fiercely loyal to. She’s tenacious, independent and funny because it’s how she negotiated her troubled past, and she uses the pills to power up all of her strengths. She takes risks. She’s able to stay awake longer, numb herself to the mounting dread and keep herself sharp on stimulates. She blazes through the town in her cherry red PT cruiser, popping pills, willing to do whatever it takes to get to the truth and it all starts here, at my favorite bit!

When not writing SHERRI SMITH spends time with her family and two rescue dogs, and restores vintage furniture that would otherwise be destined for the dump. She lives in Winnipeg, Canada, where the long, cold winters nurture her dark side. FOLLOW ME DOWN is her first thriller. Visit her online at http://www.sherri-smith.com/, and on Twitter, @SL_Smith_.