Spencer Ellsworth is joining us today with his novel A Red Peace. Here’s the publisher’s description:

A Red Peace, first in Spencer Ellsworth’s Starfire trilogy, is an action-packed space opera in a universe where the oppressed half-Jorian crosses have risen up to supplant humanity and dominate the galaxy.

Half-breed human star navigator Jaqi, working the edges of human-settled space on contract to whoever will hire her, stumbles into possession of an artifact that the leader of the Rebellion wants desperately enough to send his personal guard after. An interstellar empire and the fate of the remnant of humanity hang in the balance.

Spencer Ellsworth has written a classic space opera, with space battles between giant bugs, sun-sized spiders, planets of cyborgs and a heroine with enough grit to bring down the galaxy’s newest warlord. 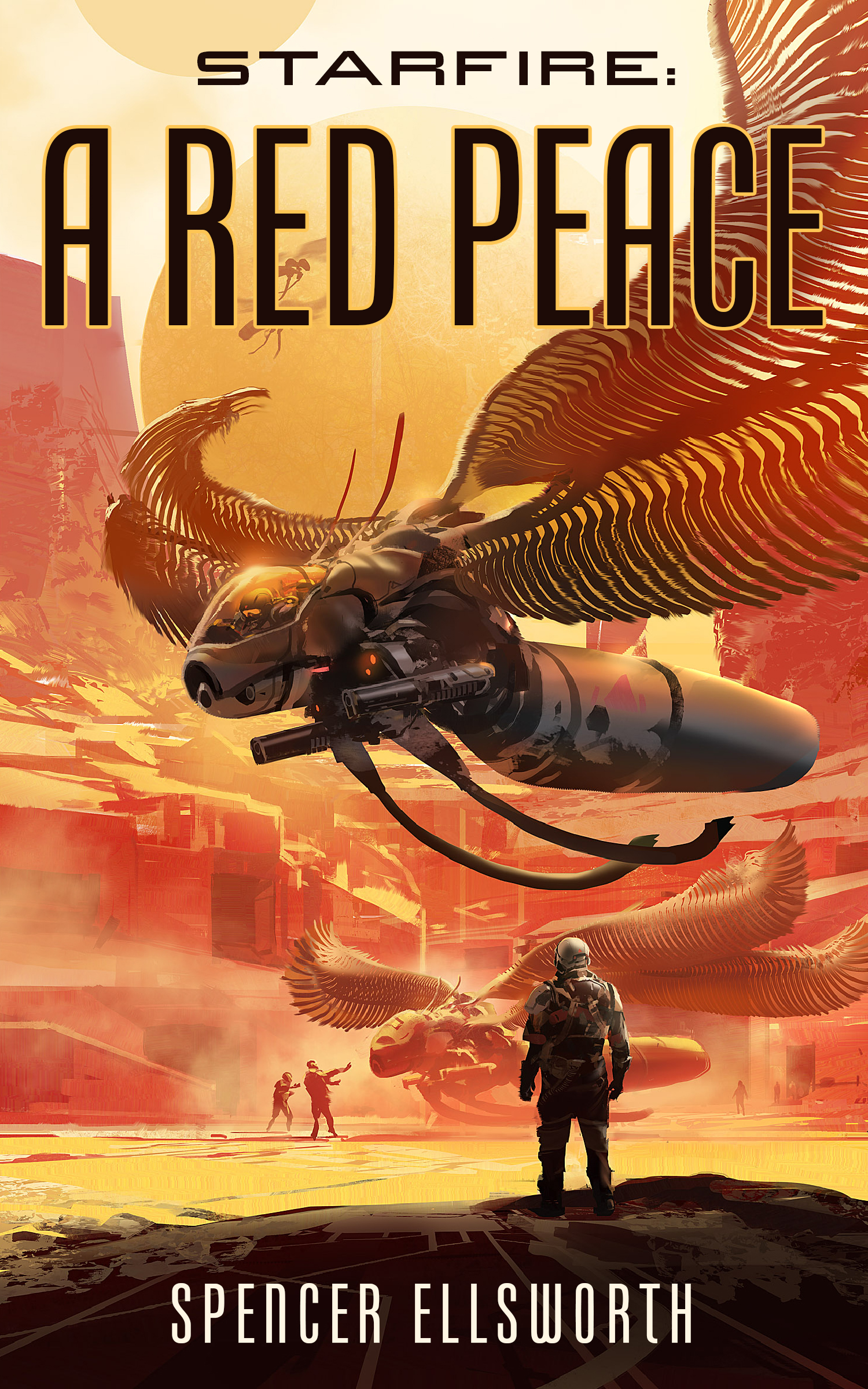 I feel weird talking about “my favorite bit” with A Red Peace because this novel just fell right out of me. It was fun to make up. It was fun to write. It was even fun to revise, and revision is NOT SUPPOSED to be fun. Revision is supposed to be when you weep into your booze and your life in narrated in a bad French accent and is black and white. “Ze artist sufferz for ze art.” That kind of thing.

A Red Peace wasn’t that. It was a total brain dump, one part 80s kid, saturated with Star Wars and Transformers, and one part history buff obsessed with the failed “noble” revolutions of the 20th century.

But when I’m thinking about the book, there are three places that really stand out to me, where a character really found their voice.

The first was in the (very short) omniscient prologue, when the heroic Resistance has beaten the evil Empire (sound familiar? It’s supposed to) and their heroic, handsome leader, John Starfire, gives the command:

Kill every human being in the galaxy.

That moment was the seed of the story—the idea of following a brave rebel leader to the point where he starts to look less like Luke Skywalker and more like Stalin.

My antagonist, Araskar, was a tricky character to write, and he was all wrong in my first draft. He had to be likable, but at the same time, he had to continually make terrible choices because he couldn’t face the fact that his cause had become evil.

For the second draft, I wrote him into a white-hot, blood-and-mud soaked battle, to show that he could actually do heroic things with a small unit—but when his superior officer tells him they’re going to hunt down children, his cognitive dissonance is such that he decided just to get high.

Finally, Jaqi, our hero, my favorite forthright smuggler who gets into all this trouble because she wants a fresh tomato, was a blast to write all the way through. She’s the first character I ever wrote who can’t read, who has little interest in galactic affairs, and who is all the more interesting for it.

My favorite bit of Jaqi’s story is a part that… I really don’t want to give away!

It’s when she realizes something. Something very important.

Guess you’ll have to read the book.

Spencer Ellsworth has been writing since he learned how, starting with the sweeping epic “Super Tiger” in crayon on scratch paper. His short fiction has been published at Lightspeed Magazine, The Magazine of Fantasy & Science Fiction, Beneath Ceaseless Skies, Tor.com and many other places. He is the author of the Starfire Trilogy, a series of short space opera novels coming from Tor.com in fall 2017 and early 2018, starting with A RED PEACE on August 22nd, 2017. He lives in Bellingham, Washington with his wife and three children.
Did you know you can support Mary Robinette on Patreon!