Randy Henderson is joining us today with his novel Smells Like Finn Spirit. Here’s the publisher’s description:

Finn Gramaraye is back in the final installment of Randy Henderson’s Familia Arcana series, which began in Finn Fancy Necromancy, and Bigfootloose and Finn Fancy Free.

Finn’s re-adaptation to the human world is not going so well. He’s got a great girlfriend, and is figuring out how things like the internet work, but he is still carrying the disembodied personality of Alynon, Prince of the Silver Demesne, the fae who had occupied his body during his imprisonment. And he’s not getting along at all with his older brother. And oh, by the way, an enemy from his past is still trying to possess him in order to bring about Armageddon. 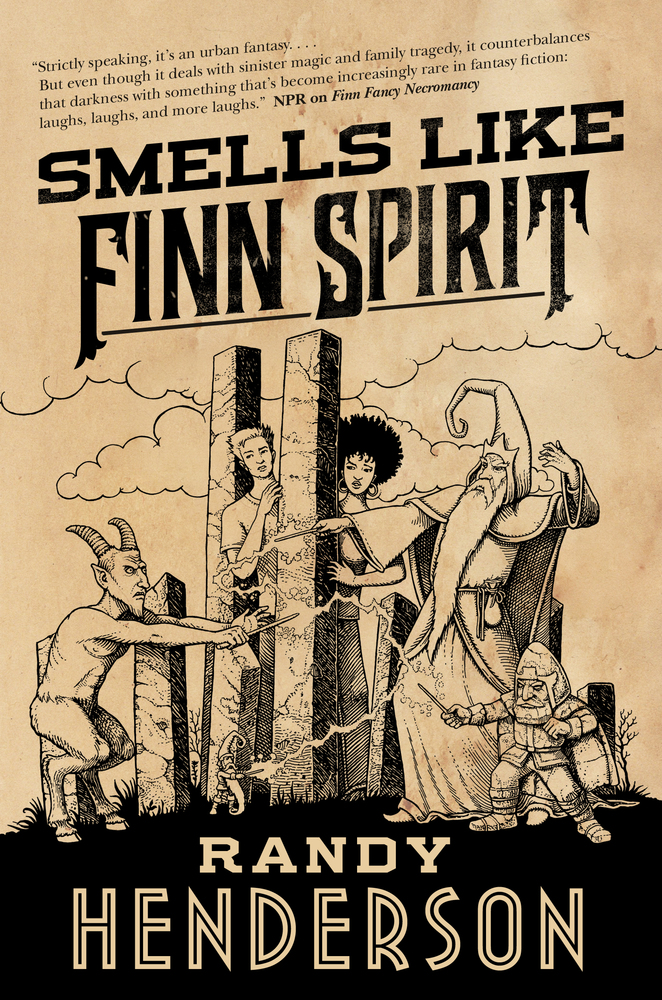 “Sure, like riding a drunk porcupine set on fire!  So much fun, oh creator of mine.”

Uh … right.  So what’s your favorite bit about Smells Like Finn Spirit?

“Oh, I don’t know … the bit where no crazy magical creatures try to kill me or acrana supremacists try to conquer the world, and I get to just snuggle down with my true love to eat pizza and watch Valley Girl together?”

So pretty much the opposite of everything that actually happens?

“Pretty much.  What is your favorite bit?”

Seeing how you and your story evolved over the three books.  You’re in a trilogy!  So many of the fantasy series and movie franchises that I’ve loved were trilogies.

Right.  Point being, I am pretty dang happy right now.  I mean, I know you are the one who had to do all the fighting –

“Yeah, thanks for that!  Sasquatches?  Jor?gumo?  Freaking racist vampires?  What were you thinking?”

Yes, well, I mean, I wrote you some fun times too though, right?  The romance, the humor –

“Romance and humor?  Yeah.  Thanks for constantly talk blocking me!  All the dorky or dumb things you made me say to my girlfriend that caused problems?  Not to mention the smart-ass quips that get me into trouble with everyone I meet.”

“And my family!  I know you were going for comedic family dysfunction, but I mean, poor Petey! He’s such a sweetie!  Why make him think he was a waerwolf for most his life?  Or make Sammy allergic to magic?  And what I really don’t get is Mort.  Why would you stick anyone with him as a brother?  Or –”

Yes, okay! I get it.  I put you all through heckfire.  But I went through it all with you, you know.  I lived it as I wrote it, the joys and the pains.  I grew as a writer and a person over these same years.  And these were the first books I’d ever written on deadline, that was quite a challenge.

“So you think standing around in your boxers sipping chai doing the noble work of thinking up Point Break jokes really compares to facing down an angry gnome mob or seeing a waer-collie flirt with your girlfriend?”

Okay, okay!  All I am trying to say is this journey together has been my favorite bit, and with the trilogy arc complete, I feel kind of like I too saved the world, or at least I feel much of what I imagine you felt, that sense of happiness, and Mission Accomplished!

“Clearly you have already forgotten what actually happens at the climax of the book, when you  –”

Hey!  Why don’t we share an excerpt now?  Something non-spoilery and silly, huh?

“Sure.  Hi, lovely readers.  Here is just one example of the kind of creatures that my bonkos creator makes me face in Smells Like Finn Spirit.  I suspect thinking these things up to torture me is really his favorite bit.  What a super swell guy he is.  You should totally buy his books.”

It rose up, a massive armored body of rusted iron and tarnished brass, seven feet tall at least, like a four-armed ogre sculpted by a mad welder as the stage prop for a death metal band.

These horrific automatons had been banned since the Fey-Arcana War of the Civil War era that spawned them, for much the same reason civilized countries tried banning chemical weapons, human cloning, or tabloid journalism — the cost to our humanity was just too great.

How they came to exist in the first place had been a series of desperate solutions to problems that should have been dropped into a dark hole and forgotten to begin with.

First, you have to understand that zombies tend to move slower than a frozen slug past a traffic cop, and are dumber than a Biff Tannen book report.  Part of that is that their brains and bodies are rotting away of course, and part of it is that they lack a real spirit to give them true will.  Zombies are just meat puppets animated with life force stolen from other living beings.

Which is why, even in the most desperate times of war when the ban on dark necromancy and zombies had been given a blind eye, there were no zombie armies, and certainly no zombie apocalypse.  All you had to do to escape a zombie was be able to move.  At all.  And failing that, just hit them hard — rotting corpses tended to fall apart pretty easily.

Then it was discovered that, for some weird reason, the slowness problem goes away when you re-animate a hardcore bigot.

Before banning experimentation on arcana prisoners, researchers learned that some people were severely lacking in will, the force that not only helps us get up in the morning but allows us to make the difficult choices and changes.  These people were instead partly animated by a kind of small nuclear power source in their lizard brain, as if a small bit of their spirit been mutated by the primitive, unreasoning emotional energy there: a kind of spiritual cancer.

Nobody truly understood how or why it happened, but on further research it was found that all of these people were serious, scary bigots in some way.

The point being, even after death the bigot had a brain capable of driving action.  And after death their hatred and self-loathing could be manipulated by necromancers like spiritual energy, in much the same way they had been easily manipulated by the worst politicians and religious leaders in life.

But there remained the problem of a rotting body.  A rage zombie was still a stiff, disintegrating-sack-of-decay zombie.

And that’s where the thaumaturges came in.

These inventors of magical artifacts had created automatons as weapons, but with similar problems to the zombies.  While thaumaturges could animate the machines and enspell basic instructions into them, the automatons were useless for doing complex tasks or fighting wars.  And simply sticking someone inside to operate the suit had proven too difficult — the sheer bulk and convolution of controls and gears needed to manually operate such a beast reduced its speed down to that of a zombie.

But animate a ragey hate brain with necromancy, and transplant it into a mobile suit gundoom, and you got an autozombaton.  Or as they were later called, robigots.

Yet even then, there remained a problem.  Using a robigot as a weapon was a bit like unleashing a pack of rabid lions in your studio apartment to deal with a mouse problem.  It wasn’t likely to end well for anyone, especially yourself.