These words launched over a dozen alternate realities and histories, invaded existing universes, and even inspired a book or two with Debris and Detritus running amok through every world they touch.

Join in the fun, but be forewarned about reading at night. Some of these compulsively readable tales will give you nightmares, while others will have you startling the parakeet by hooting with laughter.

*Writer Rhonda Eudaly cannot be held responsible for the results of those blithely spoken words. Editor Patricia Burroughs, however, might. 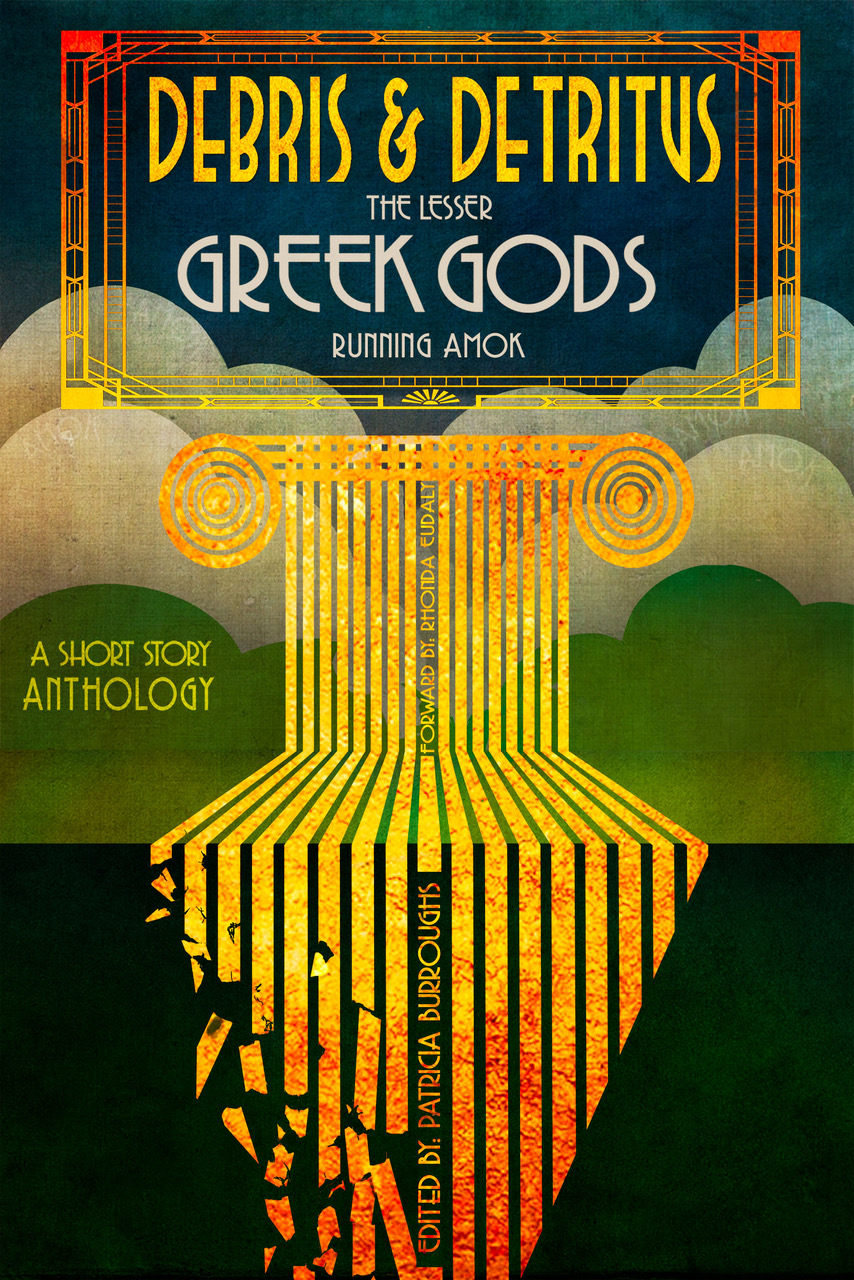 In retrospect, it’s as if I was in Charlie Brown’s world.

Rhonda Eudaly was reading her short story with Debris and Detritus serving as “Queer Eye for the Dead Guy” decorators who have been assigned Hades—both god and domain—to make over.

But even though I listened to her reading that night in Dallas and laughed along with everyone else in the room, I was assaulted by images of D&D, my own personal gods of rubble and refuse.  The pair had taken up a somewhat malevolent residence in my office, moving boxes or flinging books into my path as I’m carefully traversing the minefield otherwise known as The Floor.

It was divinely instigated, the way the idea sizzled through the air from her lips to my brain.

“This ought to be an anthology,” I enthused. “With lots of writers, each writing their own version of Debris and Detritus.”

I got more enthusiastic. “Seriously! It could be amazing! You should do this!”

Smart woman that she is, she said “I’m not doing it, but if you want it, it’s yours. As long as my story is in the book.”

And that, dear friends, is how it began.

I, who had never published a short story, who am the least likely person to actually plan, organize, and perpetrate just about anything and have it actually happen … I had a “Mickey and Judy, let’s put on a show!” moment.

I was going to edit an anthology.

I was going to handpick writers — my mind was already gleefully building a list—and then sit back while they did all the work!

What could possibly go wrong?

Fortunately, I did enlist Diane Tarbuck of Story Spring Publishing via a quick call to her from the corridor outside the room, and she said okay, if I put it together, she’d publish it. So I knew I had ‘real editors’ who would, you know, edit.

Wait. I haven’t told you my favorite thing, you say?

Choosing the writers to invite.

Some were screenwriters and comedy writers. Others were multi-published, newly published or never published.

The gods they created were male, female, twins, not related at all, youngsters or even made of stone. But whether they were set in London or New Orleans, on Mt. Olympus or on a faraway planet named Celta, the stories amused me, entertained me, and gave me chills.

Max Adams is a professional screenwriter and not an obvious choice to invite, some might say. But her story leads off the havoc, just so her first page will be the one to show up in the sample.

People don’t suspect sweet, blond Michelle Muenzler of hiding such darkness within. It only took her 700 words to tell her chilling tale.

Antioch Grey brings a British wit, edge, and attitude that I could wallow in all day.

I anticipated a mystery from Claire M. Johnson. The only mystery was this other side of herself she’d hidden; she gave us wretched little brats as Debris and Detritus.

Robin D. Owens has been writing romances set in her SFF Celta universe for a couple of decades. Here, she wrote a tale of rebirth and redemption (not a romance) from the point of view of a house. Yes, a house. And a guy who will end up being the hero of one of her fantasy romances down the line.

ChandaElaine Spurlock delivered exactly what I’d hoped—another London setting and more British snark. I thought this would be her first published credit. But then she turned in her bio. She’s been ghostwriting fiction for years. This is her first credit under her own name, though, and it’s clearly time to keep going.

I absolutely knew that Toni McGee Causey’s story would involve Bobbie Faye Summrall, Cajun beauty queen and walking Natural Disaster. A match made in heaven for these gods! No. Toni’s tale is set in the French Quarter and just might have… a dragon?

Irene Radford, one of my Book View Café colleagues who is multi-published in short stories and novels, gave me a downtrodden brother and sister, used and abused by their father and siblings in the pantheon. But oh, how things change…

Mark Finn returned to San Cibola, the magical city in California he co-invented in the 90s. All you fans who have been waiting for more San Cibola tales for years? You’re welcome.

MJ Butler is an award-winning comedy writer but had never been published in fiction. And yet I was certain that with his trademark humor—sometimes-absurdist, sometimes logical in the most illogical ways—he’d write a story I wanted to read. I said, “Will you?” He said, “Yes.” And he did.  There are cows.

Jeanne Lyet Gassman is known for her literary novel and short stories. Wait. Romance? Romance! She wrote romance! I did not see that one coming, and what a delight it is!

I hoped that Weyodi, an enrolled member of the Comanche Nation, would fling Debris and Detritus into the middle of her. Her mind boggled. It boggled off in an entirely different direction. Her vision of deity past, present, and future is not only is provocative but also suggested a sequel, Debris & Detritus, The Lesser Greek Gods Provoking Jesus. [Well, you never know; it could happen.]

And finally… what can I say about Beth Teliho’s story that wraps up the anthology? Rhonda Eudaly quotes Ice-T, who said, “Women writers write the sickest stuff.” I’m thinking the blonder and more innocent looking the woman, the darker the story.

You know, this is where I should say something elevated like, “I strove for eclecticism in voice and idea.” But I didn’t.

I handpicked some writers who would take the concept and go in unexpected directions, the likes of which promised to amuse me.

And these writers whose voices, backgrounds, and off-kilter way of looking at the world rewarded me—and you–with an array of different tellings with nothing more than the seven simple words I gave them to work with:

Award-winning screenwriter & novelist Patricia Burroughs loves Pratchett, Aaronovitch, Dunnett, and Heyer. Continuing her epic YA fantasy, The Dead Shall Live, Volume Two of The Fury Triad will come out later this year. She and her husband live in Dallas, Texas.