Myke Cole is joining us today with his novel Breach Zone. Here’s the publisher’s description.

The Great Reawakening did not come quietly. Across the country and in every nation, people began “coming up Latent,” developing terrifying powers—summoning storms, raising the dead, and setting everything they touch ablaze. Those who Manifest must choose: become a sheepdog who protects the flock or a wolf who devours it…

In the wake of a bloody battle at Forward Operating Base Frontier and a scandalous presidential impeachment, Lieutenant Colonel Jan Thorsson, call sign “Harlequin,” becomes a national hero and a pariah to the military that is the only family he’s ever known.

In the fight for Latent equality, Oscar Britton is positioned to lead a rebellion in exile, but a powerful rival beats him to the punch: Scylla, a walking weapon who will stop at nothing to end the human-sanctioned apartheid against her kind.

When Scylla’s inhuman forces invade New York City, the Supernatural Operations Corps are the only soldiers equipped to prevent a massacre. In order to redeem himself with the military, Harlequin will be forced to face off with this havoc-wreaking woman from his past, warped by her power into something evil… 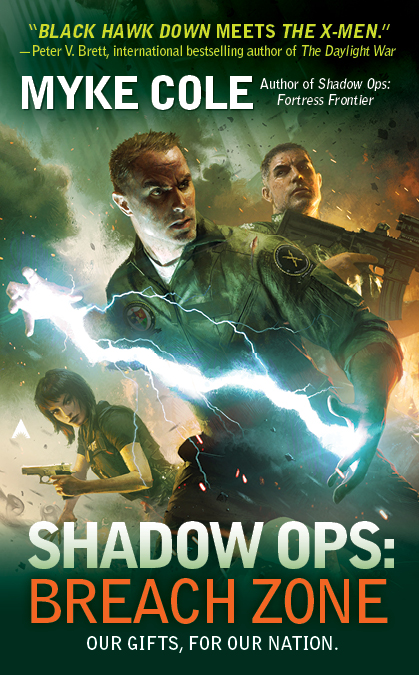 When I first got my book deal and moved to New York City, I was eager to launch my life as a writer. I spend the majority of my time in the intensely conservative institutions of law enforcement and the military, and I was looking forward to forging deeper into a social circle that was progressive and diverse.

When a friend hit town and asked me to meet her at the Romance Writers of America (RWA) conference in Times Square, I threw on my Chuck Taylors (hey, I live in Brooklyn), and jumped on the subway over there. I rode the escalator up, wondering what the crowd would look like. I’ve pretty much lived my whole live in SF/F conventions, but this was my first time ever going to a gathering of romance writers and fans.

I crested the escalator and my jaw dropped open. There were thousands of people on the con floor.

And not a single male.

When my friend and I took our seats, I asked her why this was. “There have to be some men writing in this genre,” I said. “Not many,” she answered, “and the ones that are writing category romance do so under female pseudonyms.”

So much for diversity. I hit the ceiling. It was wrong when fantasy writers like C.S. Freidman, Andre Norton and Robin Hobb had to choose deliberately ambigious pseudonyms because women weren’t supposed to write fantasy, and it was wrong that men should do the same for romance. I resolved then and there to change it. I was going to be the first male category romance writer to publish a work in the genre under his own name.

I went on this same tear with a friend of mine who had been an editor for Harlequin, one of the major romance imprints. “That’s all well and good,” she said, “but you can’t just waltz into a genre you know nothing about and expect to be successful. You need to learn your trade. You have a lot of reading to do.”

Good advice. I took it. I read and read and read and still do read romance. I was amazed at how central character was to the genre, how these seemingly plotless stories were pulled along by agendas clashing, how transporting it was to see protagonists fleshed out until they felt like real people.

I was in awe of the skill involved. I felt sure I could never equal it.

Which brings me to my favorite bit of BREACH ZONE, my 3rd novel.

BREACH ZONE is a war story, as are all the books of the SHADOW OPS series. They center on the US military, and feature a lot of action, hardware and explosions, spinning rotors and rounds downrange.

But in BREACH ZONE, I began to explore the backstory of two of the main antagonists from the first novel in the series. Their storylines merged and intertwined until I sat back, reading this bit:

She covered the rest of the distance on her knees, rose unsteadily do her feet. Her voice went smooth, her eyes little- girl wide. “I thought maybe you loved me.”

Harlequin wasn’t fooled, but it didn’t stop the tears from coming as he answered her lie with truth. “I thought maybe I did, too.”

And that blew me away. Because I realized that all that reading in the romance genre had percolated into my brain, flowed unconsciously into my story.

But it is also a love story.

And it is so soso much better for it.

As a secu­rity con­tractor, gov­ern­ment civilian and mil­i­tary officer, Myke Cole’s career has run the gamut from Coun­tert­er­rorism to Cyber War­fare to Fed­eral Law Enforce­ment. He’s done three tours in Iraq and was recalled to serve during the Deep­water Horizon oil spill.

All that con­flict can wear a guy out. Thank good­ness for fan­tasy novels, comic books, late night games of Dun­geons and Dragons and lots of angst fueled writing.