Adam Christopher is joining us today with his novel Hang Wire. Here’s the publisher’s description.

Ted is worried. He’s been sleepwalking, and his somnambulant travels appear to coincide with murders by the notorious Hang Wire Killer.

Meanwhile, the circus has come to town, but the Celtic dancers are taking their pagan act a little too seriously, the manager of the OldeWorlde Funfair has started talking to his vintage machines, and the new acrobat’s frequent absences are causing tension among the performers.

Out in the city there are other new arrivals – immortals searching for an ancient power – a primal evil which, if unopposed, could destroy the world. 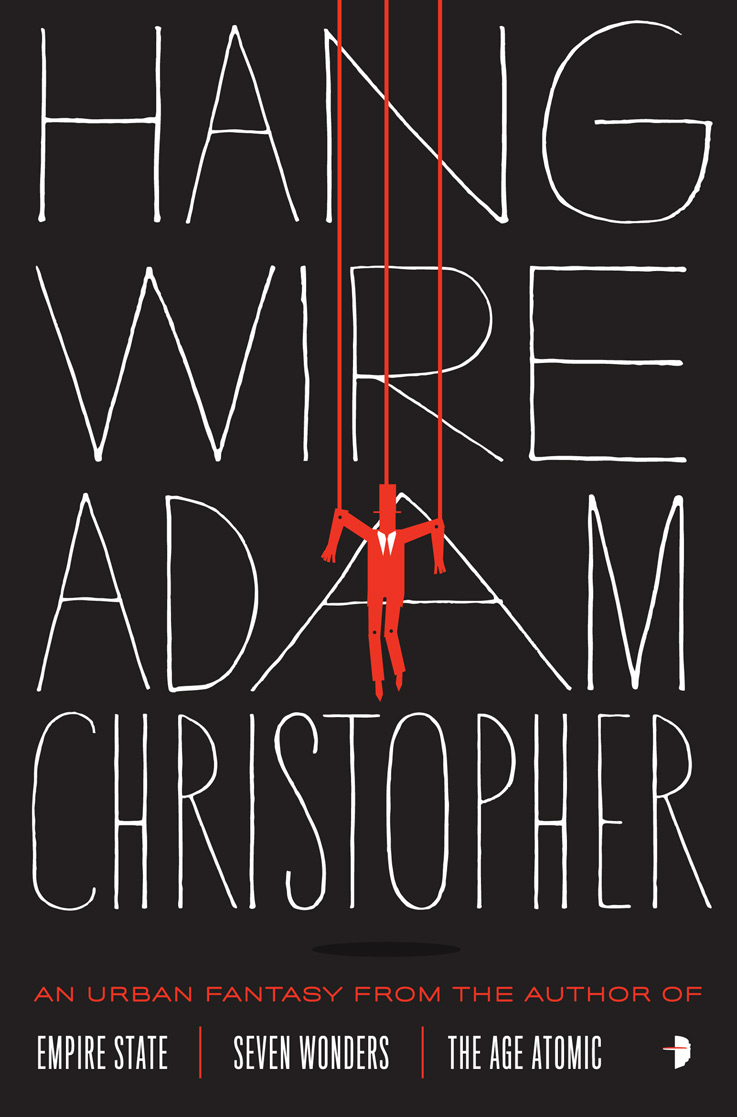 Look, I’ll be the first to admit it: there is a heck of a lot going on in Hang Wire. If it’s not exploding fortune cookies and a masked acrobat chasing a serial killer, it’s a Hawaiian God of Death and a mythological warrior-king from ancient Korea searching for the lost power of a murdered Chinese trickster god. There’s a sentient – and quite malevolent – circus fairground, not to mention something unspeakably old and shapeless slumbering underneath San Francisco.

Picking a favorite thing from all of that is actually pretty difficult, but the more I think about it, the more it comes back to one particular character: Joel Duvall.

Joel is a wanderer. When we first meet him, he’s deep in the middle of Indian Territory in April 1889. Part of the great Oklahoma Land Rush, Joel has nothing left to lose as he marches on foot across the open country, ready to stake his claim.

Move forward to the present, and Joel is the oddball operator of a circus fairground. One eye is white, his clothes are old and dusty and he wears a ridiculous stovepipe hat. People don’t like him, and for good reason. He doesn’t mix with the company, and at night he talks to the fairground rides.

And the fairground rides talk back.

Joel was right there at the beginning, when I first made notes on what would become Hang Wire. He was the villain – or rather, the personification of the evil that had arrived in San Francisco. Because while Joel is a nasty son-of-a-something-or-other, he’s also a pawn. He’s being used by something far worse, an evil that is almost beyond human understanding; an evil that needs a puppet to carry out the tasks that it can’t.

The more I wrote, the better I came to understand Joel and his situation – he was looking for salvation, not servitude. And while the evil thing he found has kept him ageless from the late Nineteenth Century to the early Twenty-First, all he really wants is to find a way out.

Joel’s journey from Indian Territory to modern-day San Francisco became a new part of the novel, one I never planned to write, but really added something to the story. His journey, told as a series of interludes, is almost entirely separate from the main book, but those sections were a lot of fun to write. There’s murder, and mayhem, and an alien power pushing him to carry on – a power channeled through a coin in his pocket, as Joel discovers when he finds something hiding in a cave:

Joel gritted his teeth and slid his fingers into the pocket where the fob watch should have been, had he not hocked it somewhere back in Tennessee the previous week, getting just enough money to reach Indian Territory by high noon. The watch was nothing and was worth virtually the same, but it had been just enough. The coin was worth a lot, Joel knew that, even if it wasn’t gold like his daddy told him (but it was, it was). But the coin was his father and his father marched with him, to the west, to the future.

Joel took the coin between two fingers and pulled it out. It was cold, although not burning cold like it had been moments before. Joel held it up and turned each side in the sun, the embossed bird on each catching the sunlight and shining, shining like the eagle itself was alive.

And then Joel heard the voice again.

Alas, poor Joel. If only things had gone differently…

Adam Christopher is a novelist, the author of Empire State, Seven Wonders, The Age Atomic, Hang Wire, and the forthcoming The Burning Dark. In 2010, as an editor, Christopher won a Sir Julius Vogel award, New Zealand’s highest science fiction honour. His debut novel, Empire State, was SciFiNow’s Book of the Year and a Financial Times Book of the Year for 2012. In 2013, he was nominated for the Sir Julius Vogel award for Best New Talent, with Empire State shortlisted for Best Novel. Born in New Zealand, he has lived in Great Britain since 2006.