LJ Cohen is joining us today with her novel Dreadnought and Shuttle. Here’s the publisher’s description:

When a reckless young computer programmer resurrects the damaged AI on a long dormant freighter, she and her accidental crew expose explosive secrets from a war they were taught ended decades ago.

Welcome to the universe of Halcyone Space.

Charged with protecting Ithaka and its covert rebellion from discovery, Ro and the members of Halcyone’s crew learn to lead double lives within the Commonwealth. Their plans to hide in plain sight disintegrate when Alain Maldonado — Ro’s father — returns seeking revenge and takes a hostage to ensure their cooperation. As the former shipmates track Maldonado down, each course they plot endangers the life of his hostage, threatens to reveal Ithaka, and uncovers conspiracies that could brand them all traitors.

DREADNOUGHT AND SHUTTLE is book 3 of the Halcyone Space series of science fiction space opera adventures that began with DERELICT and continued with ITHAKA RISING. 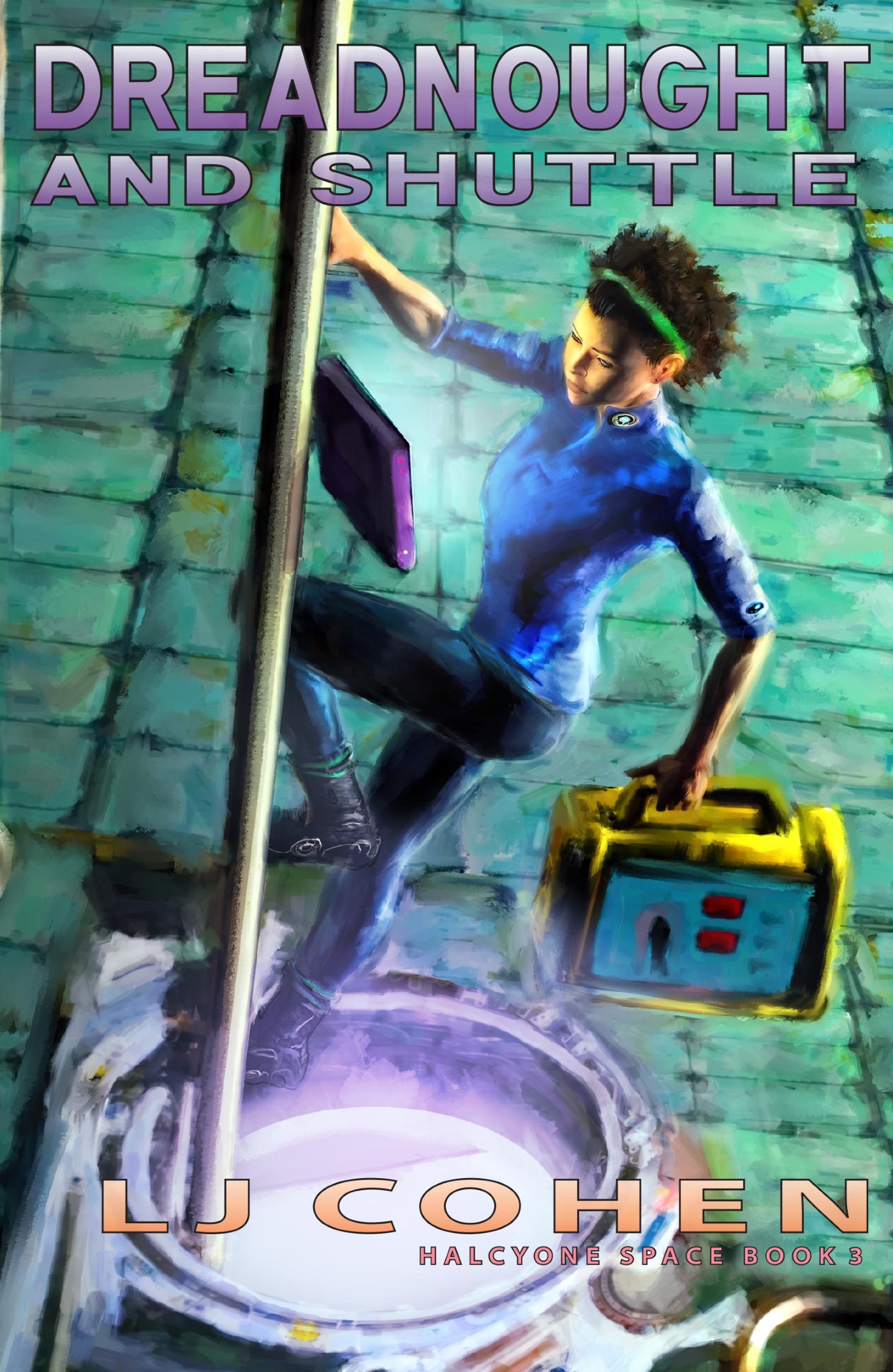 My favorite bit in writing DREADNOUGHT AND SHUTTLE was creating Dev. Devorah Martingale Morningstar, to be precise. The character and her name were a gift from the muses. Dev simply showed up in the first chapter of the novel and steadfastly refused to be a minor player.

When your subconscious is that stubborn, you’d be a fool not to listen.

The Halcyone Space books already had a large cast of main characters and I certainly didn’t plan on adding another point of view to my ensemble. Initially, Dev was just meant to be the college roommate of one of my main characters, Micah Rotherwood. In the middle of book 2 of the series, Micah finally gets what he wants – a place at University. Book 3 starts with him arriving there. Since he would be cut off from his former crewmates aboard Halcyone, I knew he’d need some characters to interact with. Hence, Dev.

She is everything Micah is not: brash where he is controlled, garrulous where he is reserved, open where he is secretive. And her upbringing in the rough-and-tumble settlements – permanent refugee cities that sprung up on Earth after the rising seas took most of the coastlines – stands in sharp contrast to his privileged life off planet as the son of a career diplomat.

It is her fierce will to survive and her creativity that I most love about Dev. Aside from her tough childhood in the settlement and the skills she has from it, she is a materials science student. Being trapped on a ship is her equivalent of a kid in a candy store and she totally takes advantage of what’s around her. There’s a reason why I describe her scenes as MacGuyver meets The Ransom of Red Chief.

Part of the fun of writing her scenes was in exploring the world of materials science and I completely lucked out in finding a large materials science community on G+. The people there enjoyed helping me come up with realistic scenarios of materials and what could be done with them. Materials science is utterly fascinating – the intersection of physics, chemistry, and engineering. I’m so glad I got to discover it through Dev.

Here’s a bit from her point of view:

She released the pressure on the tool and pulled it free. Her forehead beaded sweat. Her hands were trembling. Moving quietly, she repositioned to the opposite corner and tried again. Again, the screwdriver started to warp before there was any sense of movement from the plug. With deliberate care, Dev set it down and wiped her hands on the bottom of her shirt. Then she picked up the tool and went to the third corner.

In her mind, she was uncovering a precious relic, and this was a dig site, not a prison. Slowly, carefully, she could loosen the plugs. She had to.

It was just going to take time. Dev had plenty of that.

She lost track of how long she circled the small area of floor, applying minute amounts of pressure to each of the four plugs in turn, before one shifted. At first Dev thought she’d cracked the screwdriver, but when she looked down, the pattern of the flooring had been disrupted and the tiny disk was now ever so slightly raised up above the level of the tile.

“Fuck, yeah,” she whispered, before attacking the remaining three with a new energy.

While her captor believes she is trapped and helpless, locked in the ruined galley of a spaceship in the midst of a refit, she has spent her day making tools from the polymer water containers and finds a way to break into the access shafts below her. Yes, she’s afraid. Yes, she feels overwhelmed, but she is no one’s passive victim. Dev isn’t a kick-ass warrior or a computer hacker. It is her quiet strength, creative problem-solving skills, and determination that make Dev one of my favorite things about DREADNOUGHT AND SHUTTLE.

LJ Cohen is a novelist, poet, blogger, ceramics artist, and relentless optimist. After almost twenty-five years as a physical therapist, LJ now uses her anatomical knowledge and myriad clinical skills to injure characters in her science fiction and fantasy novels. She lives in the Boston area with her family, two dogs, and the occasional international student. DREADNOUGHT AND SHUTTLE (book 3 of the SF/Space Opera series Halcyone Space), is her sixth novel. LJ is a member of SFWA, Broad Universe, and the Independent Publishers of New England.

2 thoughts on “My Favorite Bit: LJ Cohen talks about DREADNOUGHT AND SHUTTLE”