Alberto Bieri is joining us today with The Dragon King, the first episode of his epic fantasy The Chronicles of Calibran. Here’s the publisher’s description:

Marked from birth, King Hesleof Obella has sat on the Dragon Throne ruling the land of Calibran for over two decades. A meeting with Lyrroth, an ancient dragon, brings forth surprising news to the wise king.

Hesleof’s ultimate goal of uniting the varied races of Calibran is now altered to keeping the Realm safe from an upcoming threat, potentially more deadly than the dragons of old. Twisted creatures, racial tensions, a disgruntled race of Dragons wanting back the land stolen from them by the mortals, and the emergence of a never before seen power rising from the forbidden Chaos Lands are about to change the face of Calibran forever.

But Hesleof is not alone: the fierce minotaurs of Calibran as well as, Noble elves, Wood elves, Dark elves, Dwarves and even Orcs could be allies in dealing with these new threats.

Hesleof will look for answers: can the legendary Noble elf, Almorwen, provide answers to his doubts? Is the Realm really in danger? Does Hesleof needs to no longer just unite the races, but hold them together to survive? 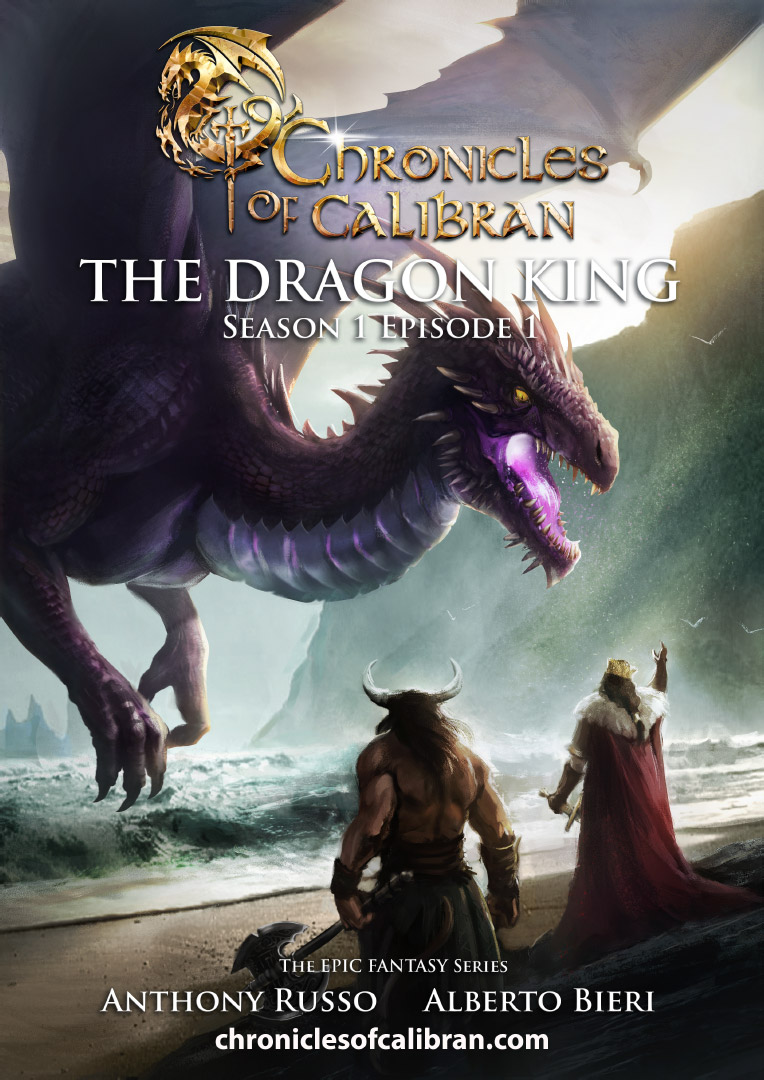 There are plenty of epic battles and intimate struggles in The Chronicles of Calibran, but when thinking about a moment from The Dragon King that I really love, it’s actually a minor incident that comes to mind.

On his way to consult with Lyrroth the Benevolent, a wise dragon who carries a dire warning, King Hesleof comes across a murder. Two barbarians have killed a goblin, seemingly as part of a robbery, and are about to set upon more:

“Our business does not concern the throne,” growled one of the barbarians.

“Does it concern the goblins?” Hesleof motioned to the two cowering creatures. “For the goblins, like the barbarians, are under the protection of the throne.”

Ruric dismounted and took his place beside Hesleof. He began to unlash his battle axe, but stood back as the thalagring let out a screech, unsettled by the building tension. Ruric patted the creature’s shoulder before lifting his weapon free. The king still mounted, their heads were level, and Ruric said, “It appears that your protection might be in question for the one over there.” He pointed with his axe to the goblin corpse, then to the severed head. “…and there.”

“Barbarians do not answer to minotaurs,” said the barbarian holding the sword. Hesleof assumed he was the leader. “We talk to men, not beasts.”

“You will address my sergeant-at-arms when spoken to,” Hesleof said. “Now state your name and business, barbarian.”

The reader might assume that it’s about to be the worst day of the barbarians’ lives, but there’s actually no easy resolution. Both sides expect the king’s protection, and there’s the constant possibility of the situation tipping over into violence. Hesleof behaves wisely, preventing bloodshed, but the murderers go free. There’s little justice to be found, and no-one walks away happy – even Hesleof’s closest friend, the minotaur Ruric, asks if they’re now rewarding the murder of their citizens.

Perhaps it’s a stark moment, but it encapsulates so much about the world of The Dragon King, and about what that titular position entails. In Calibran, potential rulers are ‘Marked’ from birth by a unique symbol. The symbol is ancient magic, but it doesn’t ‘choose’ the next ruler. Instead, it merely marks those who might one day possess the necessary qualities.

In myth, legend, and even our own history, there’s always been this idea that rulers are chosen by divine providence – that they’re selected or supported by otherworldly forces. If you look at Arthurian legend, the bedrock on which a lot of fantasy writing is based, you have that pivotal image of the Lady of the Lake presenting Arthur with the sword Excalibur. In our world, you have the Egyptian Pharaohs, considered Gods on Earth, and even the concept of the ‘divine right of kings’ with relatively recent figures such as King Louis XIV and King James I. Clearly, it’s a concept that strikes a chord with us, and it’s something that The Dragon King, and The Chronicles of Calibran as a whole, is designed to play with.

King Hesleof is a good man and a fair ruler, he lived up to his potential, but that’s not the only way it can go. As the series unfolds, the reader encounters other Marked who are in a different position. Some aren’t ready yet, some don’t want the job, and some have been corrupted by a sense of entitlement.

When Hesleof encounters the barbarians and the goblins, the reader sees that this is a world where, even with the wisdom of Solomon, there’s often no perfect solution. Rulers are successful because being Marked sets them a challenge; it’s the first step in a baptism of fire that can have amazing results, but it is only that first step. It’s an intricate, impressive mechanism, but it’s not the finger of God pointing at one person.

This idea that nothing is guaranteed – that even those who are ‘chosen’ can stumble, fall, and fail – is everywhere in The Chronicles of Calibran. As the goblins lament their murdered brother and the barbarians escape with stolen gold and the king’s blessing, a seed is planted in the reader’s mind. This was a situation that was perfectly mediated by a good king, one who values the safety and happiness of his people, and yet there’s only tragedy. If that’s the case, then what happens when war and terror descend on the land, and that good king is forced to make hard decisions? What happens when ruthless contenders covet his throne and challenge his power? What happens when the very magic that binds the kingdom together threatens to burn it to ash? The Dragon King begins to answer those questions and, while there’s always hope, the minor scene I’ve chosen as my favorite suggests there may be some very dark days on the horizon.

Alberto, a fantasy enthusiast since childhood, is the driving force behind the Chronicles of Calibran. His is inspired by the Dragonlance novellas and Tolkien books. Alberto is a big fan of the creations of fantasy artists like Larry Elmore, Angus McBride and Boris Vallejo.

Together with his friends he still enjoys long sessions of RPGs like Dungeons & Dragons, Middle Earth Role Playing and tabletop games.