Ruth Vincent is joining us today with her novel Elixir. Here’s the publisher’s description:

Mabily “Mab” Jones is just a twenty-something, over-educated, under-employed New Yorker trying to survive as a private eye’s unpaid intern . . . or is she? Once a powerful fairy, but tricked by the Fairy Queen into human form, Mab is forced to face her changeling past when investigating a missing person case at a modern speakeasy.

Obadiah Savage bootlegs fairy Elixir to human customers thirsting for a magical fix. But when Mab and Obadiah become joint suspects in a crime they didn’t commit, the only way to prove their innocence is to travel back to the fairy realm. And when Mab confronts the Fairy Queen and learns the depth of her betrayal, she must decide if the fate of the fey world is worth destroying the lives of the humans she’s come to love. 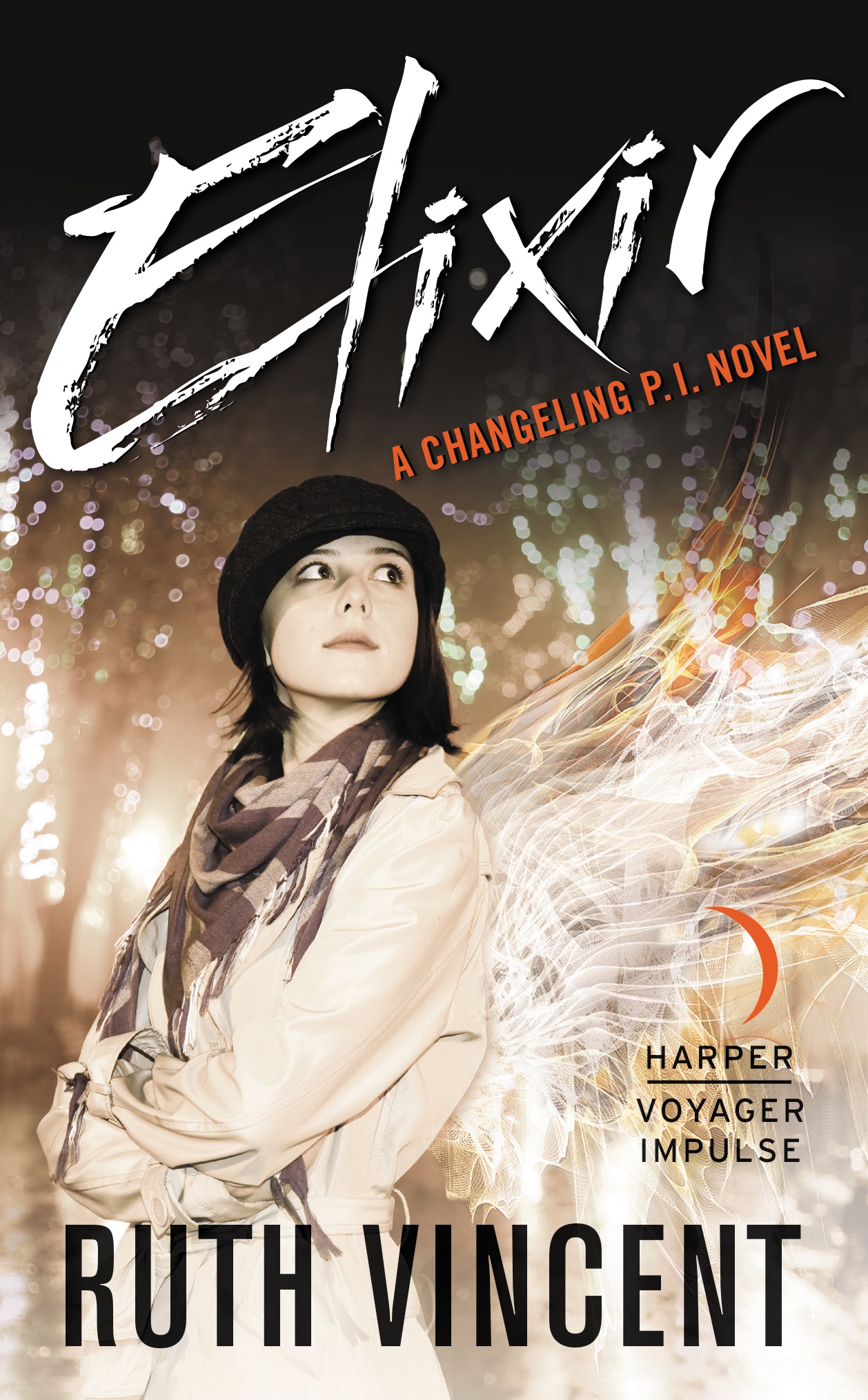 When world-building my urban fantasy novel, ELIXIR, my maxim as a writer was always, can I make it cooler? This became my rubric for designing a magic system. A portal to fairyland in New York City was cool. But using the Times Square New Year’s Eve ball drop as a portal to fairyland, with a magic bootlegger harnessing the energy of the millions of people counting down to power his spell? Cooler.

It was important to me to give the urban part of my story the same tender attention to detail as I gave to the fantasy element; I wanted my fictional NYC to be just as enchanting as the fairy realm that runs parallel to it (in my experience, the real New York City is both more brutal and more magical than it’s commonly portrayed by Hollywood.) The idea for the Times Square ball drop scene occurred to me as a short story back in 2008, before I’d even written the manuscript of ELIXIR.

Like any self-respecting New Yorker, I have never and would never spend New Year’s Eve in Times Square. However, on the eve of 2009, as I watched the ball drop from the relatively safe distance of Columbus Circle, it occurred to me how primal these New Year’s Eve festivities are. Take away the computerized LED lighting system, and it’s not so different than the way people have been celebrating this season for thousands of years: clamoring for the return of a ball of light in the cold, dark, midwinter night. What a perfect setting for a portal to fairyland?

A modicum of internet research yielded some surprising facts: the ball is actually twelve feet in diameter (in other words, I could theoretically fit a character or two inside.) It would be pretty cozy, sure, but that would be good for building tension. And so I wrote a scene where my protagonist, Mab Jones, and her love interest, Obadiah Savage, manage to get inside the ball and use it to travel to the fairy realm.

While some authors dread ‘middles’ as a place where stories can easily sag, I’ve always appreciated this quieter point in a book as an opportunity to explore the complexity of my characters’ inner lives, which can get overshowed in the flash-bam action of a fast-paced opening. One of the delightful consequences of squeezing my heroine and hero into a geodesic sphere together for hours was that they would be forced to talk to each other. Many uncomfortable truths and tender intimacies are revealed in the conversation they have in the ball while waiting for the drop – because they literally can’t get away from each other anymore. (I wish I could share this conversation with you, but that would lead to spoilers!) At the end of this quietly emotional scene, however, comes the ball drop itself – a wild joy ride that was a pleasure to write, and definitely one of my ‘favorite bits.’ Enjoy an excerpt:

….The cacophony of voices became one voice.

What was it going to be like when they got to “one”?

I grabbed Obadiah’s hand. But he took a tiny streamer whistle out of his pocket and blew on it, making an obnoxious noise. Clearly he was having a grand time.

“When we transition to the next world, what’s it going to be like?” I asked nervously.

How the hell was I supposed to relax? We were getting closer and closer to the bottom of the pole!

The giant ramen noodle sign slid past us. Lights flashed all around; the sound of the crowd was deafening.

“Four!” they chanted in unison. Their voices were getting louder.

I looked down at the crystal between my feet. We were almost there.

Light exploded around us. Booming blasts shook the ball. And there was smoke—wait, why was there smoke?

“Obadiah—something’s wrong—the ball is on fire!”

He was saying something—I could see his lips moving, but I couldn’t hear him—the sound had deafened me. Each blast shook me inside, vibrating in my bones. I screamed, but I didn’t think he could hear me. In the strobes of glaring light that illuminated Obadiah’s face, I could see that he was smiling. Why was he smiling? The ball was exploding!

But then suddenly it wasn’t the fireworks. A flash of white light like an atom bomb blinded me—and the bottom of the ball disappeared out from under our feet. We were falling, falling into nothingness.

I never finished my expletive. I never heard the crowd yell, “Happy New Year!” I only felt the jolt of impact as my body slammed into something cold and hard. Vaguely, as if underwater, I heard voices singing “Auld Lang Syne,” and then everything went black.

Ruth Vincent spent a nomadic childhood moving across the USA, culminating in a hop across the pond to attend Oxford. But wherever she wanders, she remains ensconced within the fairy ring of her imagination. Ruth recently traded the gritty urban fantasy of NYC for the pastoral suburbs of Long Island, where she resides with her roguishly clever husband and a cockatoo who thinks she’s a dog.

Ruth Vincent is the author of the CHANGELING P.I series with HarperCollins Voyager Impulse, beginning with her debut novel, ELIXIR.