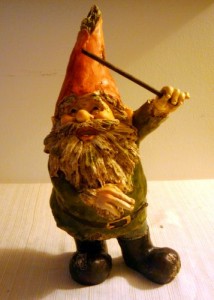 My brother, bless his heart, wanted to give his girlfriend an Elvis garden gnome as a gag gift on her birthday and discovered that no one makes them. This was actually a little surprising. So he turned to me.

To begin, I found an existing gnome in a position that would work for my needs. This one is called “The conductor.”  I really wanted one playing a guitar but the only one in that pose was also plaster, which wouldn’t work. I needed a resin gnome.

I’ve been keeping it off the internet, since it was a surprise, and referring to a “troll” I was building. My brother’s girlfriend called after receiving it today and thanked me in the spirit with which it had been given.