Subterranean Press has asked me to create three dolls of the title character in Neil Gaiman’s Coraline, using the art of Dave McKean as my reference point. Mr. Gaiman and Mr. McKean will each receive one of these, and the third goes to a lucky customer who preorders Coraline direct from SubPress. 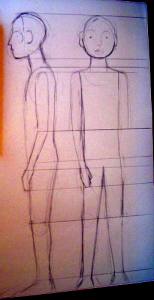 To begin, I do a scale drawing of Coraline, extrapolating from Mr. McKean’s interior art for her body and the cover for her face. The first thing that struck me upon seeing it was how much his cover art resembled Albrecht Roser’s paper-folding technique. This is a style that I used extensively in our production of the Snow Queen. The idea of working in paper is very appealing for this project because I think it speaks to text. My plan now, is to work pieces of the text into the puppet as a textural element. More about that as we go along.

The first thing I did was to establish the size. Coraline will be 16″ tall. Looking at the drawing allows me to consider my material choices more thoroughly. To give you an understanding, her wrists will be about the thickness of a pencil. Now, in a puppet, I’d have to be worrying about durability in performance, which is thankfully not an issue here. At the moment, I’m considering paper or wood for her limbs. I may look at cloth as well, but I would still want an internal structure because I hate it when arms break at the wrong point. Wood will be the easiest, so I suspect that is what I will go with, though the purist in me wants to build the whole thing out of paper.

The next step though, will be to work on her face. That is going to be the hardest part of the process, so it’s the one I do first. The rest of it is sort of, you know, generic puppet building.

7 thoughts on “Beginning to build Coraline”