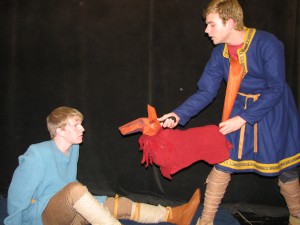 While Mary’s off in Seattle, I thought I’d offer up a little content from Houston  – a peek at Odd and the Frost Giants rehearsals as we approach our May 3 opening.  Or, more accurately,  a peek at a photo shoot we did for the Free Press Houston last night before working on the first half of the show.

Loki’s costume was the most finished, so we shot Loki/Odd stuff.  Odin and I took these photos as the professional photographer was setting up and doing his thing. 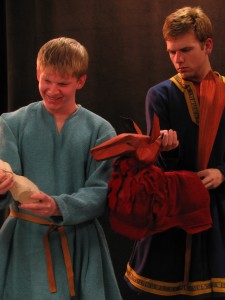 Conveniently, I’ve just added a post about Loki over on the Stages education blog – including my retelling of the story of how Asgard’s Wall was built and how Odin got his unusual steed.

We’ve missed Mary in rehearsal this week – it was so much fun working on puppets together last week.  But the cast continues to do great work.  I found myself last night giving notes directly to the bear.  He took them, too.  We’ve got massive technical rehearsals coming up on Sunday and Monday and then a slightly more relaxed few days of rehearsal while the show that makes up the other half of the rep previews and opens.  Then a little brush-up tech and dress and the first student groups arrive on May 3.

A reminder for those of you in the Houston area.  There are only 3 public performances – May 7, 14, and 21 at 2pm.  The rest of the shows are 10am weekday matinees for school groups and homeschoolers.  Tickets are on sale now at 713.527.0123 or on the Stages website.  If you’re interested in coming to a student matinee, contact Eva LaPorte at 713.527.0220 x223 or elaporte@stagestheatre.com
-Rob Kimbro, director of Odd and the Frost Giants

1 thought on “A Peek at Odd rehearsal”