There are several new characters in Without a Summer. This is one of my favorites of them, Mr. O’Brien.

Now the image itself is a composite of a couple of different paintings from the period, the base of which is Portrait of an Artist, by Michel Martin Drolling.

Having grown up wearing glasses, I loved the idea of giving them to a dashing young man and making him no less dashing for that. The common meme that glasses means bookish and meek, or nerdily intelligent, has always bothered me.

So Mr. O’Brien wears glasses and… well. Watch him flirt.

A young gentleman leaned against the pianoforte, resting his elbows upon the cloth thrown over it. He was a tall, slender man, with a riot of red hair, which sparkled in the sunlight like ruby to Melody’s gold. His blue eyes were a match for Lady Stratton’s, though a pair of wire- rimmed spectacles framed them. His clothes, which showed all the signs of an excellent tailor, were splashed with mud. There could be little doubt that this was Alastar O’Brien, eldest son of Lord Stratton. 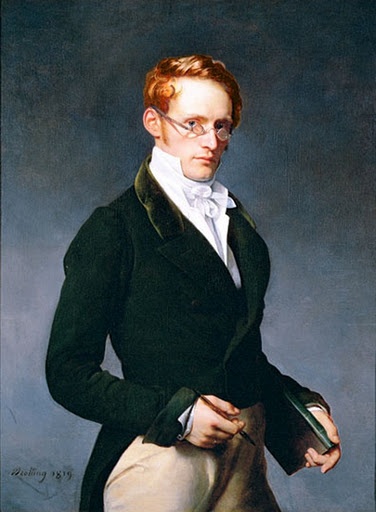 As the Vincents entered, he straightened, the casual nature of his posture altering to something more formal, but none the less attractive for that. “Good afternoon?”

Vincent offered him a short bow and made the appropriate introductions. Jane could never get used to being introduced as Lady Vincent, but she smiled and curtsied. “I see you have already met my sister.”

“I was drawn to the music. It was quite improper, but when one hears a muse, one must follow.” He was quite the gallant.

Looking up through her eyelashes becomingly, Melody said, “I should say that the one who inspires the music is the muse, rather than the one who merely plays it.”

“It depends, I suppose, on where one finds inspiration,” Mr. O’Brien said.

“I have often felt the same way, sir.” Vincent suppressed a smile and almost winked at Jane.

3 thoughts on “Without a Summer: Mr. O’Brien”