Paul Cornell is one of my favorite people, at least in part because he’s a darn fine writer. I have been waiting very impatiently for his new novel London Falling to come out in the US. Today’s the day. This is an urban fantasy mixed into a police procedural with all the wit, grit, and realism you could want.

Police officers Quill, Costain, Sefton, and Ross know the worst of London—or they think they do. While investigating a mobster’s mysterious death, they come into contact with a strange artifact and accidentally develop the Sight. Suddenly they can see the true evil haunting London’s streets.

Armed with police instincts and procedures, the four officers take on the otherworldly creatures secretly prowling London. Football lore and the tragic history of a Tudor queen become entwined in their pursuit of an age-old witch with a penchant for child sacrifice. But when London’s monsters become aware of their meddling, the officers must decide what they are willing to sacrifice to clean up their city. 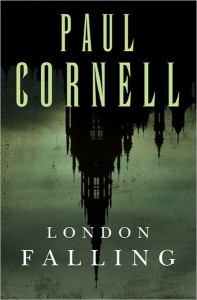 London Falling is my first urban fantasy novel. (You may know me from my Doctor Who episodes, or perhaps from my comics work. Or not at all, in which case, hi, and thanks for being open-minded enough to still be here on sentence three.) It’s the story of a unit of modern London undercover police who accidentally gain the ability to see the magic and the monsters. After they’ve finished panicking, they decide that the only way they’re going to survive is to use (real) police methods and tactics to try to complete what’s now become a terrifying operation. There’s loads of wry police humour, but it’s actually quite a dark book, a survival novel about the emotions of a group of disparate professionals, thrown together and struggling .

I think the novel actually has a few things in common with Mary’s Glamour books, that, while not realising it at the time, I’d been influenced by her in the writing of it. The force our heroes encounter is ‘the paramilitary wing of feng shui’, something similar to the Psychogeography of the Situationist movement, the power of buildings and landscape (in this case, London) to ‘remember’ beings and events. In other words, it looks and feels like magic, but my inclination (and the police instinct of my leads) is to pick that concept apart, to ask what that means. So, actually, rather as becomes clear of Mary’s series in Glamour in Glass, London Falling is an SF novel wearing another genre’s clothes. It’s actually a ‘clever people solve a problem’ book, in the tradition established by SF editor John W. Campbell.

Now, I should say (because I hate it when someone in a genre says ‘actually, I don’t belong with all these other people, I’m loads better’), that I still wear my urban fantasy… underwear… proudly… (because if the other genre is the book’s clothes, you see where that metaphor came from, but I’m not sure about where it went). London Falling feels and reads like an urban fantasy novel, and that’s exactly what I was aiming for, just as Mary’s books consciously have a dialogue with and do honour to earlier works in the historical fiction genre.

So here’s my favourite bit. (‘Finally’, they say.) My favourite in a certain way, that is. I could equally pick something highly emotional, where there’s triumph or despair, but I think this makes the point I was going for above. Detective Constable Kev Sefton (black, gay, a boxer, tired of how corrupt his undercover partner Costain is, put upon by the world, but starting to have a real interest in how the hidden power of London works), has just taken my other three leads (Costain, DI Quill, and genius intelligence analyst Lisa Ross) on a tour of the supernatural sights of London, to try and orient them in their new world. (They haven’t yet got to… the really terrifying thing.)

They found a Starbucks. ‘In June 1934,’ Sefton read from his laptop, ‘London Transport held an inquest into the death of a bus driver who’d been killed at the junction of Cambridge Gardens and St. Mark’s Road, after he swerved violently for no apparent reason. Other drivers testified at that inquest that they had also had to swerve at that spot, to avoid a double – decker bus – a number seven to be precise, in the livery of the General Omnibus Company – which had become part of London Transport the year before – which “whizzed out at them”, and then disappeared. These appearances happened at two particular times of day, there being a morning service and an afternoon one.’

‘So the bus driver that got killed didn’t stick around to become a ghost,’ said Costain, ‘but we just saw the ghost bus that killed him.’

‘My point,’ said Sefton, ‘is this. You hear stories like that all your life and think: cool, a ghost bus. But now we have to look at this stuff analytically … a ghost bus?! The “ghost” of a motor vehicle? A public conveyance, presumably, which didn’t head towards the light, move on to join the choir invisible in … bus heaven, the great terminus in the sky, where all good buses go when they … I don’t know, break down, but instead is doomed to … drive eternally the streets of Earth! How can there be a ghost bus?!’ He looked between them, hoping they were getting this. ‘There isn’t even any record of a number 7 crashing.’

‘There very probably would have been at least one death occurring on any particularly bus route –’ began Ross.

‘So one death on board is all it takes to make an entire bus into a ghost? Why not ghost houses where people died, or ghost hospitals? Every bit of London would be full of them. Listen, what about those ships you saw?’ He felt the risk of pursuing this, the risk of losing them with theory rather than the sort of factual detail coppers worked with. But Ross had said they should allow assumptions. And more than mere assumption, he was certain, he was starting to put together a working hypotheses. ‘They must have had lots of passengers on them but, in the case of them, as in the case of that particular bus, we don’t see any of those people sticking around to become ghosts. We see the vehicles themselves. When, even if we agree that vehicles can “die” and come back to “haunt” places, one of those ships was sunk somewhere else! So what’s it doing on the Thames? We could find, if we wanted to search the bottom of the sea, what remained of the actual hull of one of those ghost ships of yours, haul it up, restore it to full working order and launch it here, and then there’d be the real ship and its ghost floating on the same river! How does that work? And what about that Jack thing I met? He’s not even a real … person, or vehicle or anything that you might even think could die and haunt somewhere, he’s just an … idea!’

‘You’re saying it’s not always about something that’s died and stays on here afterwards,’ said Costain.

‘But sometimes it is,’ said Quill, ‘like with Harry’s Dad, or the kid that bloke at the football match was carrying.’

There was silence as they considered that.

‘That old fellow at the bus stop saw it,’ said Costain.

‘Yeah, he did,’ Sefton found himself pointing at Costain like he’d got an answer right in a quiz game, and realised how patronising that looked and lowered his fingers. ‘But only for a second … and that’s another thing. I don’t think this is about who’s got the Sight and who hasn’t. I think it’s a … spectrum of who can see what, when and where. That place, for some reason, is where it’s easier for people without the Sight to see the thing. And then it vanished for us too. But maybe we could follow it and see it elsewhere. Or maybe we could see it all the time if we used some of those hand gestures.’

Ross managed one of her awkward smiles. ‘You’ve got something going here,’ she acknowledged. ‘Go on, establish the narrative.’

Sefton shared that look with her, feeling relieved.

I’m hugely proud of this book, and I can’t wait to see what an American audience thinks of it. Thanks for listening, and thanks, Mary, for letting me talk to your readers. Cheerio!

Paul Cornell is a writer of SF and fantasy in books, comics and television, and has been Hugo Award-nominated for all three media. He’s written Doctor Who for the BBC, and both Superman and Batman for DC Comics. His creator-owned comics series Saucer Country returns next year, and in the meantime he’s writing Wolverine for Marvel. London Falling is his first urban fantasy novel. The sequel, The Severed Streets, is out in the USA next year. He lives with his wife and son just north of London. He’s on Twitter as @Paul_Cornell.