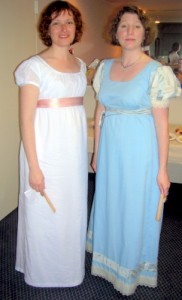 Before Wiscon I was waffling about whether or not I should take my new Regency garments. I really wanted to but I was also facing this thing in my brain which said that Serious Authors® don’t dress up as characters from their books.

But the dress was so pretty! And there were parties! So I decided that since I’m also a fan, if I could find someone to wear the other dress then I’d feel comfortable dressing in period clothes for the parties.

Mrs. Thomas kindly agreed to wear the blue dress and off we went.  The photo is provided by Greer Gilman who took it while wearing her Tiptree tiara.  As an aside, may I say that she looked absolutely fetching in the tiara.

The blue dress is slightly later than the white one and still somewhat in progress.  I found it on Etsy for $60 and my modiste is adding the detailing to make it appropriate for 1814, when Shades of Milk and Honey is set. The white dress is closer to an 1808 dress but is such a versatile style that adding accessories can push it earlier or later.  For the launch party, I’ll add a spencer to it.

Three discoveries from that evening.

One: People loved the dresses and even the staff identified them as being from Jane Austen’s era. We became walking billboards for Shades of Milk and Honey. I handed out cards about the book, but next time I must carry a reticule with me.

Two: When wearing the dresses our posture and bearing changed significantly from our daily wear.  It felt wrong to slouch, for instance.  I have on short stays which stop at the bottom of my ribs so I’m capable of slumping in my seat, but it didn’t feel right. Mrs. Thomas reports the same sensation even with modern undergarments.  The cut of the dresses themselves leads one to want to sit up straight.

It is also surprisingly comfortable.  I had been told that when the short stays are correctly worn that they pull the shoulders back and down for the proper Regency silhouette.  By the end of the evening, the only thing that was sore was, in fact, my shoulders, from being held so firmly in place. At the same time, I did not feel that my movement was particularly restricted. I’m sure I wouldn’t have been able to work a puppet, but nothing in he normal range of movements seemed restrictive.

Three: We both carried fans which became natural extensions of our hands in conversation.  Independently we both found ourselves gesturing with the fans and using the open and close of them as a form of expression.  However, we were not versed in the language of the fan so one must hope that we did not send inadvertent signals.

11 thoughts on “Wearing a Regency dress”