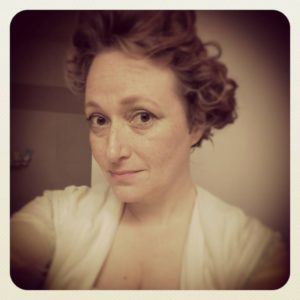 It sounds like a rocket part. It’s actually a thing that’s happening in my nose. Nose rocketry! Well… no.

It’s like this. My husband noticed that I was getting out of breath when we were walking. My heart rate wasn’t elevated, but I was breathing through my mouth. The right side of my nose just felt permanently stuffed up.

So I finally went to the doctor and she said, “Hm… I can’t see to the back of your nose. You probably have a polyp. Here’s a specialist. It’s easy to snip out and he’ll probably do it while you wait.”

So I went to the specialist and he stuck a probe up my nose, with a tiny little camera on the end, which was gross and cool all at the same time. He said, “It’s not a polyp, but you appear to have a collapsed nasal valve. This is an easy thing to fix, and we can do it in the office. Let’s do a CT scan just to be sure.”

So the CT scan comes back, and he sits me down and says. “Well… it is a collapsed nasal valve. And a deviated septum, that doesn’t look bad from the outside, but inside, it’s narrowing the channel quite a bit.” Even to my eye, that was painfully clear on the CT scan. “And you also have turbinate hypertrophy.”

He laughed, thank heavens. “You have structures in the nose called turbinates, which cause the air to hit different surfaces to help with allergies and smells. Yours are enlarged, so instead of causing the air to swirl around, they’re blocking things.”

“I’m sensing this is no longer out patient surgery.”

“Technically, it is. But just for insurance reasons. You’ll be in the hospital for 23 hours.” And then he proceeded to detail what they were going to do to me. I’ll spare you that bit. “You can expect to need about a week of recovery time. What do you do for a living?”

“Ah–” He swiveled toward me, and I could tell that we’d just gone off script. “Then let’s talk about resonance.”

Tomorrow’s surgery will fix the breathing problems. I’m apparently down to about 40% airflow on the right side of my nose. It may also change the way I sound.

It may not. He can’t tell me definitely either way, only warn me that it might be a consequence. The only thing that he can assure me of is that I won’t sound more nasal.

This will be the first time I’ve had surgery (not counting wisdom teeth). Being a writer, I’m strangely excited about it, because there’s so much good material and it is a mostly elective surgery. I mean, I could continue on with mouth-breathing when I walk and things would be fine. So there’s no pressure or stress about that.

As a narrator, I’m a little terrified. Again, it’ll be fine, and I know that, but I am about to change my instrument. I’ve recorded a sample text of “before” and I’m going to record the same thing again in the “after” stage to see how much it changes. It might not be perceptible at all.

And then, as just me, I’m worried that when they straighten out the septum they’ll “fix” my nose and get rid of the bump. When I was a teen, I would have loooooooved that. But 47 year old me really likes my nose now. It took me a long time to be comfortable with it and it’s mine. I know it will look somewhat different, because, well, they are breaking it and moving things. But still… I don’t want to look like someone else. The doctor knows that.

All of which is to say that tomorrow will be fine, and yet I’m still a bundle of anxiety. So, if you have a funny story to share, or something adorable, tomorrow would be an excellent time.

33 thoughts on “Turbinate hypertrophy and other woes”