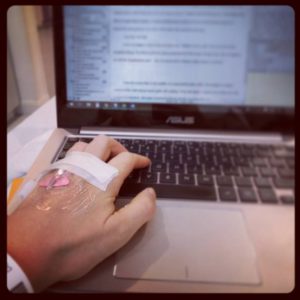 Yesterday’s surgery seems to have gone well. I still have bi-lateral rhino-rockets in my nose and am really, really looking forward to having them removed. I’ve been told that they are called nose-tampons. Having googled, yes. Yes, that’s a really good description of them.

That is, in fact, exactly what they are.

And I’m really looking forward to having them out of my nose. That sensation you’re imagining right now? Yeah. That’s pretty much exactly what it’s like. And if you’re not able to imagine that, just take the world’s worst sinus infection, blow up a balloon inside your nose, and then eat ice cream too fast. Now… try not to cough or sneeze.

The staff here has been fantastic. They are all fascinated by the audiobook narrator thing, so I played a bit of Glamour in Glass for them, because I figure that the ENT nurses never hear the “before” voice. Indeed, one of them said, “I would never have guessed, listening to this that it was you.”

Because, hello, rockets in my nose.

BUT that’s not a permanent state, so I’m not too worried. Also! The bump on my nose is still present. This pleases me. Food had flavor yesterday, which means that, even with the rockets in my nose, my sense of taste is intact.

So right now, I’m just waiting for the doctors. Rob is on his way back, to be a second set of ears listening to instructions and to take me home.

AND…I actually wrote fiction while I was here. Only 300 words, but I’m still darn proud of that. Well… of the effort. We’ll see how coherent it is later.