I was recently at a conference and got to try on Adam Savage’s replica A7-L spacesuit. An A7-L is what they wore on the Apollo missions. This was very, very cool. A couple of actual astronauts were there and said that the fidelity of the suit was high.

To begin with, Adam had me sit down to slide my legs into the suit. It’s a back opening, with a zipper and an additional closure after that. Let me tell you, I have never been so happy that I had a camisole on under my sweater. 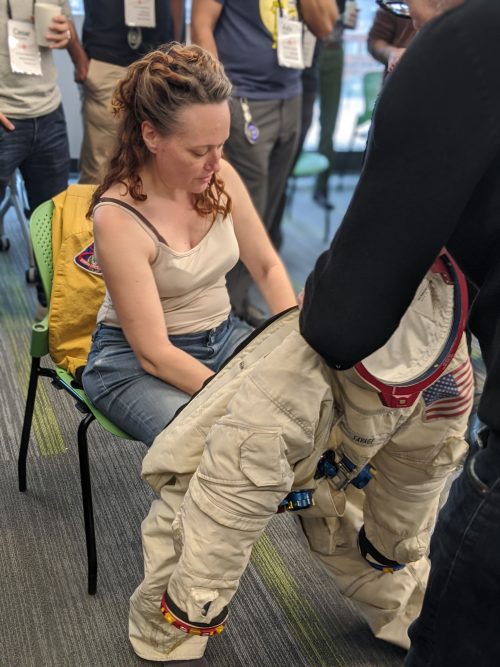 From there, he had me reach down and pull the legs up as close to my crotch as I could. I remember saying, “It’s like pulling on pantyhose.” In truth, the legs are snug — which they don’t look like they’ll be — because of the layers of insulation. This generation of suit has 21 layers.

From there, he had me slide my arms into the suit, stick my rump out, and duck through the neck ring. 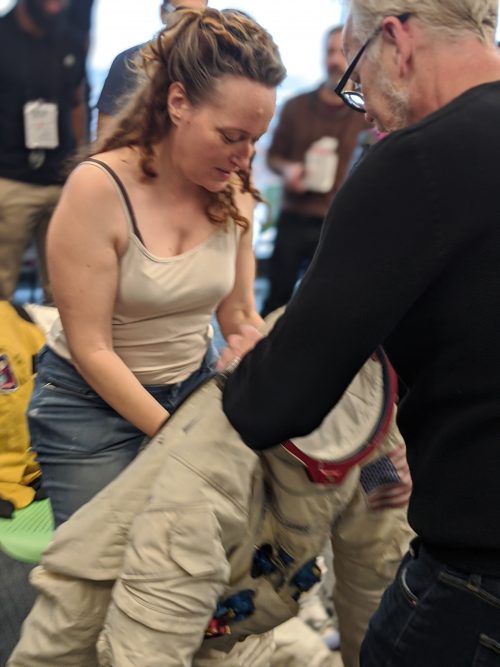 I expected this to be harder than it was. I suspect that if the suit had been built for me, that would be true, but I’m a little shorter overall than Adam and definitely shorter through the torso.

Adam zipped it up and fastened the back while I grinned like I’d been given a new kitten.

The weight of the suit settled on my shoulders as soon as my head was through the ring. It weighs around 62 lbs but since it was distributed over my entire body, didn’t feel like it was much more than a heavily beaded gown. Okay. A heavily beaded gown with a significant train, but still.

I’ve definitely worked puppets that weighed more, but having read about the weight, I was still surprised. Once I was in it for a bit, I stopped noticing. Granted, there was no Portable Life Support System attached, so with the PLSS it would have been unmanagable. 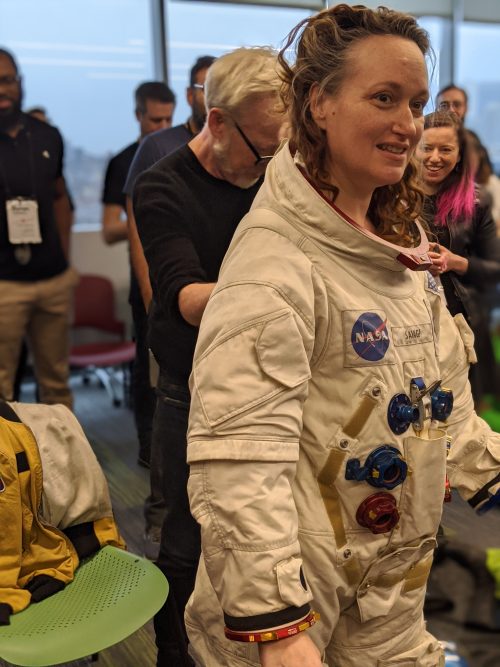 The gloves were next. They have the interior bladder and the finger tips are made of the same material as the original Apollo suits. Even without being pressurized, they are stiff and clumsy. You’ve got virtually no sense of touch and what’s there is mostly about resistance than anything nuanced.

The shoes were not regulation to be clear. But super cool. 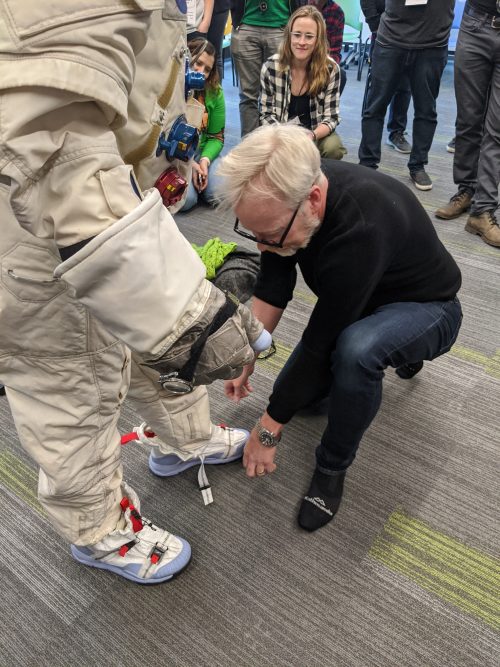 The “snoopy cap” was also very high fidelity. The mic just touched my cheek, which might not have happened if I hadn’t been grinning like a kid in a candy shop. 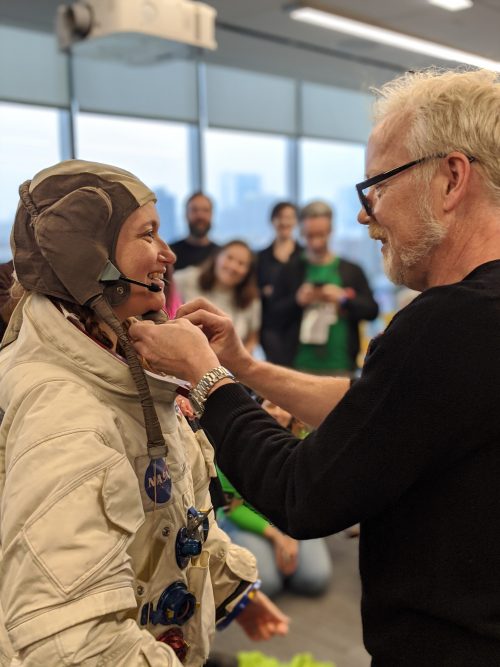 Somewhat more helpfully, there’s an immediate aural change. Again, it felt familiar from some of the puppetry or mask work, in that the sound of my own breath was reflected back at me and everyone sounded distant and a little muffled. Where it differed is that with a puppet, I would have discreet ventilation holes hidden below the helmet, and would have had some external noise coming in via that route.

It’s not as muffled as a flight helmet for a T-38, but that’s designed to dampen sound.

I would love to experience this with the comms in the snoopy cap actually hooked up. 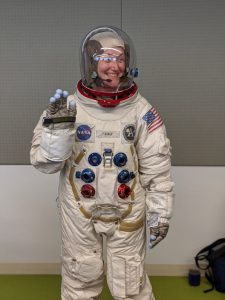 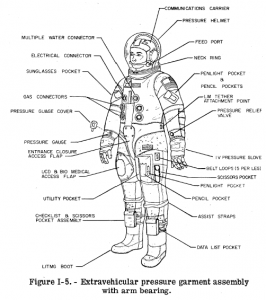 I immediately began heating up, because I wasn’t wearing a Liquid Cooling and Ventilation Garment. The LCVG is the long underwear with meters of tubing stitched to it that astronauts wear to control their body temperature on a spacewalk. Even just standing there, it was obvious that exertion would quickly become a problem.

I bent down, to see what the range of motion was like. Okay. A little restricted, mostly from lack of stretch, but not much. Think of it like wearing a snowsuit. If it were under pressure? Ugh. It would have taken a significant effort to move.

I wound up asking them to take the helmet off, because I couldn’t hear well when they were continuing to talk about the suit. If not for that, I would have happily stayed in it and played longer.

Thanks to Adam for letting me try on his beautiful, beautiful spacesuit and to Jacob Matthews for the photos.

3 thoughts on “In which I try on an A7-L replica spacesuit, courtesy of Adam Savage”