Last year, during the lead up to the Hugos, I wrote a post about how this was more important than just a rocketship. Here, read a bit of it for context.

One of the things about fiction in general, and even more so with SFF, is that it tends to reflect the zeitgeist of the culture. For instance, during the “golden age” of SF, the United States, and much of the world, was focused on space. When you look at fiction of that era, it tends to be dominated by space exploration. During the Cold War, we saw a lot of post-apocalyptic worlds that were nuclear wastelands. Now? When we see post-apocalyptic worlds it’s because of a climate disaster.In addition to reflecting environmental concerns, the awards also reflect what is important to the voters. Not just in the books that they vote for, but also in the books that they choose to read. In recent years, people have become aware of the imbalance in representation in SFF and are seeking to address it.

This is happening in other fields as well — science, gaming, film, politics… but we are always most aware of an issue in our own community. So when people are seeking out books by underrepresented populations they are doing so because it’s important to their close community and also in the larger society.

Historically, every time there’s an advance in the rights of a disenfranchised group, whether that’s women’s lib or desegregation, there’s a corresponding pushback by the dominant group because it feels like it is losing power. 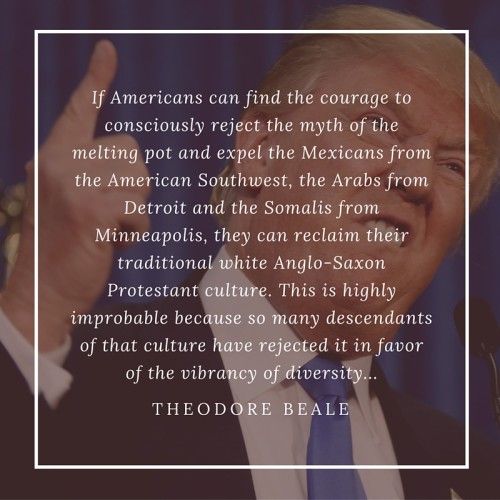 At the time, the idea that Donald Trump would be a serious front-runner for the Republican party was the fodder for jokes. It would never happen. But… if anyone was paying attention to what was happening in SFF, it should have been clear that the Rabid Puppies represented the same xenophobic, white supremacist drive that is giving Trump power.

Let me tell you, I’m terrified of the elections this year.

We’ve been writing dystopian novels as warnings for years. The Hunger Games? Reality Television as politics… not so far fetched right now, is it?

So let me be clear. The fight that is going on in SFF for inclusion is not small. It is not petty. It is a reflection of a much bigger problem, and if we, as a community, don’t start paying attention and trying to change the larger culture then we know how this will end.

The first place to start making those changes is in our own house. So what I want you to do is to think about what you can do to make SFF a more inclusive place and then do it.