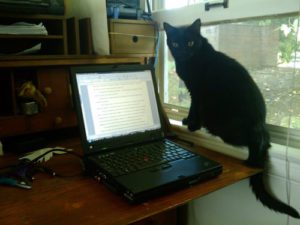 I have to say that my desk situation is vastly superior in the new apartment to either the old apartment or even the house.  I’m right by one of the windows.  Marlowe uses me as the highway to get to his window seat.  He looooves the windows, here.

I can’t blame him.  There’s nothing like sitting at the desk, having granola with  Sauvie’s Island blackberries for breakfast while staring at all the greenery outside the window to make one think that moving was the right choice.  I just feel so much more relaxed here.  Granted, I’m not working on any shows at the moment, so sleep deprivation isn’t currently a part of my life.

Meanwhile, let’s orient you a little about the apartment. 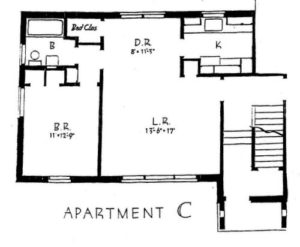 The apartments were built in 1945 and are pretty intelligently laid out, though not for a world where telecommuting was a large part of life.  We’ve adapted Dining Room (D.R) to be a dual office. Rob and I have our desks back to back and I sit on the kitchen side.

The kitchen is the smallest I’ve had, but pretty well laid out for all of that. My biggest challenge will be pantry space. It’s actually nice, in an odd sort of way, to be forced to consider if we really need things.  There are a number of things, like the 1930s toaster that belonged to my grandmother, which I love but don’t need. We almost never use it, so it is going into a box and down to the basement. 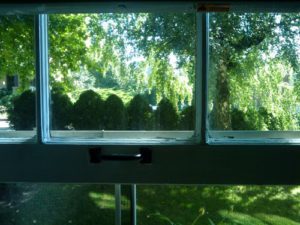 This is the view from the kitchen sink window.  Pretty amazing, eh?  What’s remarkable is how much this feels like a private yard, rather than part of a complex. The designer did a really good job with the layout. We also don’t have any common walls with our neighbors, except right at the end of the kitchen.

I’m not sure what it will actually be like to cook here because, alas, the gas company won’t come until the 16th so I won’t do any serious work in there until then.  It gets crazy amounts of light and the morning sun comes straight in the window. 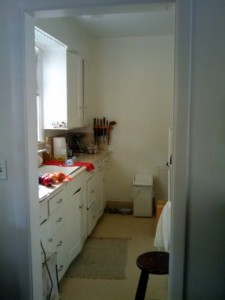 The downsides? The floorspace is not much wider than the doorframe. The refrigerator and stove are to the right of the picture, along with a single bizarrely deep cabinet.

There’s also only one outlet waaaay down next to the door. That’s where Rob’s espresso machine lives.  Technically, there is also one behind the refrigerator, and we’ve plugged a power strip into it, but I won’t need a lot of power on that side of the kitchen.  I foresee an extension cord in my life.

As the rest of the apartment comes together, I’ll post pictures of it.

3 thoughts on “The kitchen and my desk”