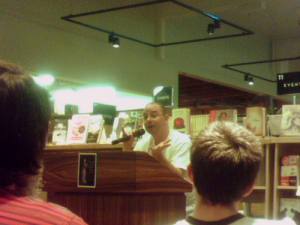 Well, actually, not so much in my house because it’s filled with boxes, but we did get to hang out a fair bit today before his reading. The reading was great fun; I’m pleased to say that Mr. Scalzi has a good sense of pacing and knows how to use a microphone to good affect.

I swung by Trader Joe’s on the way over to visit, because the man is clearly an amateur at touring and needed decent tour snack food. I also gave him a couple of packets of EmergenC to hopefully help him through the next week.

Afterward his reading a group of writers went to the Market St. McMenamins. I even enticed Rob down there and my neo-luddite husband got into a very interesting discussion about blogs with Scalzi, Jay Lake and David Goldman. David Levine and Kate ducked out early so they missed out on that fun. Rob doesn’t get the concept of blogging. He wanted to know what the difference between a blog and photocopying a page of his journal and sticking it to the wall of a bus terminal every day.

That might be an interesting experiment actually, an analog blog as it were. I said that in many ways blogs were like the op-ed columns in the newspaper, and Jay added that comments were sort of like letters to the editor. Scalzi pointed out that this sort of dialogue could really be seen all the way back to the pamphleteers running around in the 1700s century. Until he brought that up, I’d totally forgotten about what were essentially flame wars between authors who would trash each other’s work and then publish rebuttal after rebuttal. (I would give you sources, but I read it in paper and my books are in boxes.)

9 thoughts on “Scalzi in the house”