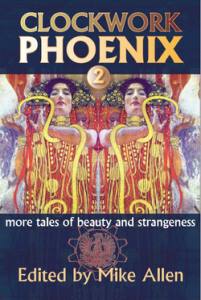 I’m delighted to announce that my short story “At the Edge of Dying” will appear in the anthology Clockwork Phoenix 2, edited by Mike Allen. The first anthology was full of amazing stories and I’m thrilled to be in the second incarnation.

Kahe peeked over the edge of the earthen trench as his tribe’s retreating warriors broke from the bamboo grove onto the lava field. The tribesmen showed every sign of panicked flight in front of the advancing Ouvallese. Spears and shields dropped to the ground as they tucked in their arms and ran.

And the Ouvallese, arrogant with their exotic horses and metal armor, believed what they saw and chased the warriors toward him. The timing on this would be close. Kahe gathered the spell in his mind and double-checked the garrote around his neck. His wife stood behind him, the ends resting lightly in her hands. “Do it.”

16 thoughts on “Sale! At the Edge of Dying to Clockwork Phoenix”