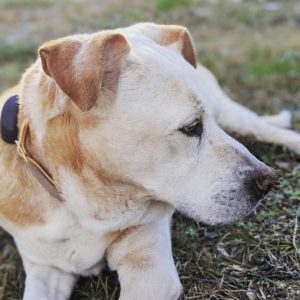 In 2006, we were staying with my parents in Chattanooga for a couple of months. My husband went for a walk to the library and when he came back, Buster had followed him home.

We tried to find his owners. He had a collar, but the d-ring was open and no tags. He hadn’t been chipped. We put notices in the paper, at shelters and vets. And then we noticed that if we picked up a newspaper or a stick to throw it, he would shy away.

We stopped looking for whoever had had him before us.

The plan was that my parents would keep him while we were in Iceland and then we’d take him back to Portland. That’s not what happened. My parents fell in love with him.

Buster was named after Buster Keaton, because he always looked a little worried. He loved catching squirrels. He loved belly rubs. When we had writing retreats he was the Muse Dog and he took his job very seriously.

Our guess is that he was somewhere between one and two years old when he found us. So he lived to be about fourteen years old, which is a venerable age for a dog of his stature. He was loving and kept us protected from squirrels.