We biked to the Kolaport today because the weather is gorgeous. In the course of browsing, I found a booth that was selling off someone’s entire collection of science fiction. 500 kronur for seven books. I managed to limit myself to seven, which was not easy.

I now have first printings of:
The Stars My Destination by Alfred Bester, which was originally 35 cents.
The Planet Buyer by Cordwainer Smith, which is billed as “Something New in Science-Fiction!”
Falling Free Lois McMaster Bujold
Some Will Not Die by Algis Budrys 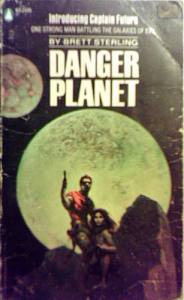 I also picked up three books just for fun. The Big Book of Science Fiction, Stories of Detection and Mystery, and one genuinely pulpy novel, Danger Planet by Brett Sterling.

The cover copy on Danger Planet is priceless.

On the back it says:

One million years back in the swirling, shrouded past, evil ultra-beings ruled Planet Roo. Suddenly, unbelievably, they are alive again, threatening the universe with total destruction.

Only one man dares challenge the Evil Ones. He is Captain Future, inter-galactic agent of justice, whose identity is top secret, whose strength is ultimate. He sets out alone to stop the deathless menace creeping ever closer. . .

Could you leave that on the table? I sure couldn’t.