By the time the runner got back with the glue gun, I was already far enough into the legs of the bear that I didn’t want to stop. In a minor miracle, the pattern that I was adapting for the legs and pelvis of the bear was remarkably easy to work with. I usually have to futz around a bit to get the limbs to work, but this one was right on my first try.

The crotch, on the other hand, more than made up for the ease of the legs. In Goldilocks fashion, my first try was too small and didn’t allow for enough movement.. My second try at the crotch gave the bear the biggest package in the world. It might have been appropriate for a bear, but not even remotely for a children’s hospital. The third try, plus some minor tweaking of the legs where they join the crotch worked well.

As I was finishing the patterning, Rob came in and let me put the torso on him so I could fit the harness. As much as I wish otherwise, for some things I just have to have the bear on a person. Inside the torso, the actor will wear a belt around the hips. The belt has four points of attachment which go to the third rib to stablelize the body. I wish I’d had the video camera hooked up, because Rob was very, very funny as he was checking range of movement for me.

The good news is that it looks like the actor might be able to dress himself. Normally for these sorts of things, you bring a dresser/chaperone with you because your range of movement is too restricted to dress. We’ll see how the final bear turns out.

I used the pattern and cut out the legs in the final material and installed the boning for the lower legs. I still have to do some boning in the pelvis, but probably won’t be boning the whole area because I don’t want to restrict the actor’s movement too much.

So, here’s where we stand now. 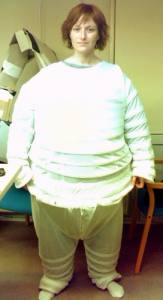 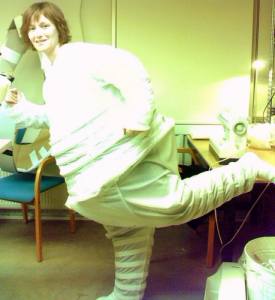 I have to make the thighs and heels still on the legs, but I’m going to need to get someone inside for both of those. Tomorrow, I should have pictures of the head as well. I installed the jaw, but forgot to take photos.

Now, I’m baking an apple pie to take to Icelandic class tomorrow. We had our final exam today and tomorrow is a free day.

3 thoughts on “Pelvis and legs”