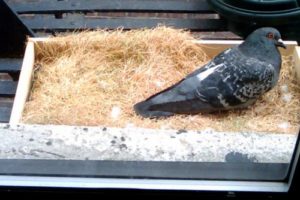 Rob had picked up a flat of wheat grass for the cats, which they loved, and at some point he set it outside to get some sun. Naturally, it rained, so he had to leave it out to drain.

Before he brought it back in, a pair of pigeons nested in it. Rob said that they visited several times before settling in. He could almost imagine them going back and forth “Cheap rent, but not much of a view.”

“Yes dear, but it’s furnished. Look at this wall to wall carpeting.”

So, that’s mama pigeon sitting on her eggs. She has two. 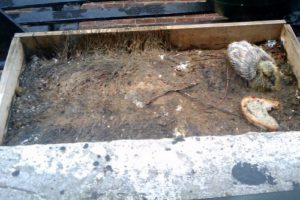 Here’s baby. Baby pigeons are one of the ugliest things I’ve ever seen in my life. And this photo is a couple of days after it’s feathers have started to puff. When they are just out of the egg, it’s all reddish skin and what looks like white bristle.

You see that the rains have pounded the pigeon’s lovely carpet into a hard cake of mud. I know they are pigeons, but still, you gotta feel bad for them. They thought they had a great deal worked out, and then wham, the apartment floods and the landlord won’t do anything. 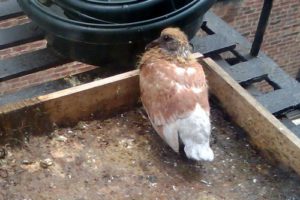 Junior has grown some. This is about two weeks after the last one. The plumage is starting to fill in and, aside from the balding head, baby is starting to look like a bird instead of an alien from the sewers.

Dad meantime has left mama to fend for herself so she’s out of the nest for long stretches. We think she’s walking the streets looking for handouts. 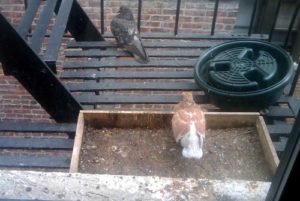 Marlowe watches them religiously. His concern for their welfare is really touching. He’s constantly pawing the window and chirping trying to get their attention.

I don’t think Mama or junior is quite sure what to make of their neighbors.

Here’s a portrait of the two of them, taken three days after the last one. You see how baby’s head feather’s have filled out. When junior flaps to get mama’s attention, he’s starting to look like a real bird.

I hope we’re around when he makes his first effort to fly.

2 thoughts on “Our neighbors, the Pigeons”