This week’s book is vN: The First Machine Dynasty

Amy Peterson is a self-replicating humanoid robot known as a VonNeumann.

For the past five years, she has been grown slowly as part of a mixed organic/synthetic family. She knows very little about her android mother’s past, so when her grandmother arrives and attacks her mother, Amy wastes no time: she eats her alive.

Now she carries her malfunctioning granny as a partition on her memory drive, and she’s learning impossible things about her clade’s history – like the fact that she alone can kill humans without failsafing…

Before I was ever paid anything for what I wrote — be it science fiction or strategic foresight — I worked a lot of retail. My first job was at a Value Village in the town where I grew up, outside Seattle. I worked after school and on weekends to afford my first computer. Before that I’d written stories on my family PC, a Gateway my boyfriend nicknamed “Bessie,” because she chewed code like cud. My shifts at Value Village often proceeded at a similarly sluggish pace. 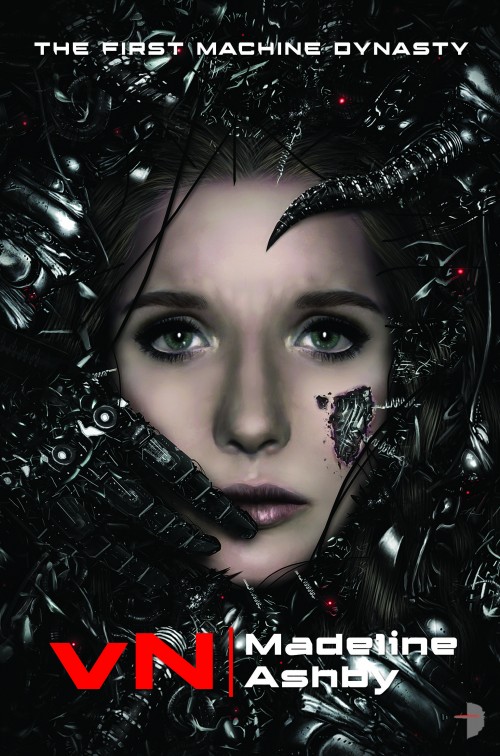 I drew from my experiences there while writing what is my favourite bit of vN, a middle chapter called “Amy Alone.” vN is the story of Amy Peterson, a self-replicating humanoid who eats her grandmother, Portia, alive when Portia attacks Amy’s mother at kindergarten graduation. Thereafter, Portia lives on as a partition of of Amy’s consciousness, and they fight for control of the same body. Being the only vN whose failsafes are broken — allowing them to hurt humans without blowing a gasket — they’re on the run.

Being on the run is expensive, though, so in “Amy Alone,” she takes a job as a hostess at an Electric Sheep outside the Olympic National Forest. The Sheep is a franchise chain of themed diners that serve both humans and robots. You and your android husband can each order a Ziggurat (a tower of chicken and waffles), but his meal will be printed out of trace metals and catalytic chemicals to beef up his repair modules. (Don’t let him eat too much, though, otherwise he’ll self-replicate.)

This chapter is my favourite bit because it’s a turning point in Amy’s character. Until that chapter the pace is relentless, and Amy has no real time to see how other humanoids live alongside humans. But now she can slow down and open her eyes to the world that her synthetic mother and organic father once sheltered her from. And it’s not pretty.

First jobs are like that. They’re a glimpse at how the world really works when your parents and teachers aren’t looking. And I don’t just mean how money works, or how responsibility works. I mean how your feet hurt after eight hours and how nobody cares. I mean finding lost children and old vibrators and even pools of blood among the dust bunnies. I mean taking vintage issues of Playboy from a display case so some guy can leaf through them slowly, his gaze alternating between your carefully blank face to Patricia Farinelli’s enormous nipples and back again. He never buys anything because he already got what he came for. That’s how the world really works. They pay you minimum wage to figure that out.

For Amy, figuring that out means observing synthetic/organic relationships from outside the safe confines of the home she had to flee, while also being truly alone for the first time in her life. She sleeps in a storage unit with only Portia’s commentary for company. She can’t share her secrets with anybody at work. She has to pretend that she’s just like any other robot, and that she enjoys getting her ass grabbed when she bends to pick up abandoned cutlery. She’s doing this because she needs the money and the free food. That’s a deeply human experience that I wanted Amy to have as a non-human being. We treat the people who serve us like they’re machines; I wanted to know how an actual machine would handle it.

BIO
Madeline Ashby is a science fiction writer and strategic foresight consultant living in Toronto. Her fiction has been published in Nature, Escape Pod, FLURB, Tesseracts, and elsewhere. Her non-fiction has appeared at BoingBoing, Creators Project, WorldChanging, Tor.com and io9.com. She tweets about futurism, anime, and what she’s making for dinner @MadelineAshby.

1 thought on “My Favorite Bits: Madeleine Ashby talks about vN”