Wesley Chu is joining us today with his novel The Deaths of Tao. Here’s the publisher’s description.

The sequel to The Lives of Tao.

The Prophus and the Genjix are at war. For centuries they have sought a way off-planet, guiding humanity’s social and technological development to the stage where space travel is possible. The end is now in sight, and both factions have plans to leave the Earth, but the Genjix method will mean the destruction of the human race.

It’s up to Roen and Tao to save the world. Oh, dear… 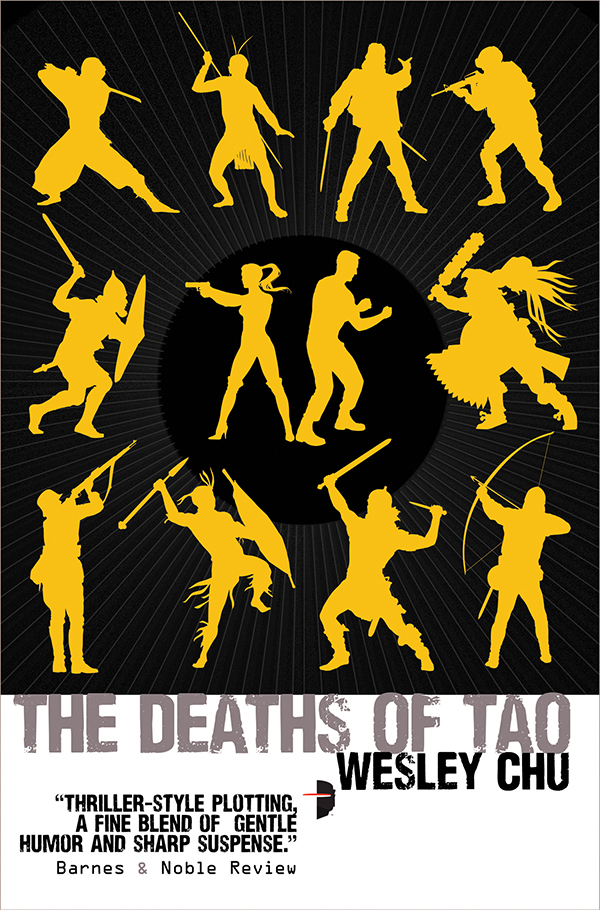 Growing up in Nebraska, I didn’t have many friends as a kid. It could be because there just weren’t that many people around, or maybe I was just a jerk. I’ll never know. So, without other kids to hang out with, I ended up playing Dungeons and Dragons by myself. I would create my own party, complete with fighters, thieves, wizards, clerics…etc, and they would go dungeon crawling. I would do my best to pretend to not know what lay ahead and try to give each adventurer a distinct personality that dictated their decisions.

And yes, I know what you’re thinking. It’s as pathetic as it sounds. But then, you’re talking to a guy who’s best friend as an eight year old was a nine-iron golf club(long story).Why did I do this? Well, as a lonely kid, I enjoyed creating these characters and developing them, building them up from scratch and putting them through their paces. These adventurers were my friends.

As my little party of adventurers leveled up, I threw more things at them. To be honest, most died along the way, somewhere between level eight and sixteen, but the ones that survived prospered. Some became barons, others mighty wizards. One even became a merchant prince. Still, others fell into evil ways, raising armies to attack their former friends. In a way, these lonely one-man D&D sessions were my earliest lessons in storytelling.

What does this have anything to do with My Favorite Bit and The Deaths of Tao? Well, allow me to explain.

In my Debut, The Lives of Tao, Roen Tan was an aimless, out-of-shape loser with low self-esteem and terrible ways with the ladies. Over the course of the book, with the help of his Quasing Tao, he built himself up, got in shape, learned to throw a stiff jab,  and eventually became a somewhat competent field operative for the Prophus faction. More importantly, he gained confidence and found direction in his life. He was still pretty awful with the women though.

In The Deaths of Tao, now that he’s fully trained, I took Roen dungeon crawling. See, life continued on for him after the epilogue of Lives, and now Roen is faced with having to deal with the realities that hetrained for. Rosy happy endings only last in Disney movies, after all.

The events in Deaths occur a few years after Lives, and Roen’s fighting on the front line of the Quasing War. War is hell and it’s taken a toll on him. He’s not only battle weary and tired; his personal life has suffered as well. Separated from his family, he struggles between choosing his familyand duty.

That is My Favorite Bit in The Deaths of Tao. It’s watching my beloved character get hit in the face repeatedly by every nasty thing I can think of, and see how he overcomes the adversity (I just realized…I’m a terrible friend. No wonder I didn’t have many as a kid).

That kind of stresses and pressure changes a man. Sure he’s still Roen, but he’s also something else as well. This isn’t the same guy happy-go-lucky guy we left in the first book. I’d liken it to him either rising to the challenge and changing from a lump of coal to a diamond, or imploding and combusting into flames.

So how does he react to the challenges I throw at him? As the author, I should know, and maybe part of me knew when I first wrote his scenes in The Deaths of Tao. To be honest; some of the decisions he made completely threw me off and I let him hang himself with it

I just went with his flow. After all, I’m just the Dungeon Master as Roen wade through the dungeon crawl I threw him in.

Read an excerpt on Tor.com

Wesley Chu was born in Taiwan and emmigrated to Chicago, Illinois when he was just a pup. It was there he became a Kung Fu master and gymnast.

Wesley is an avid gamer and a contributing writer for the magazine Famous Monsters of Filmland. A former stunt man and a member of the Screen Actors Guild, he can also be seen in film and television playing roles such as “Banzai Chef” in Fred Claus and putting out Oscar worthy performances as a bank teller in Chicago Blackhawks commercials.

Besides working as an Associate Vice President at a bank, he spends his time writing and hanging out with his wife Paula Kim and their Airedale Terrier, Eva.

The Lives of Tao (May 2013) and The Deaths of Tao (Nov 2013) were released through Angry Robot Books. His next book, Time Salvager, will be released by Tor Books in 2015.

1 thought on “My Favorite Bit: Wesley Chu talks about THE DEATHS OF TAO”