Valentine Wheeler is joining us today with her novel No Parking. Here’s the publisher’s description:

When Marianne Windmere’s bakery customers begin complaining that her parking lot is always full, she assumes it must be customers for the new restaurant next door. She’s never met her neighbor, and with the parking lot situation, she has no interest in doing so. But when a snowstorm knocks out the power and traps both women in the building overnight, sparks fly—until the next morning, when the buried argument comes to a head.

Can they find a way to reclaim the magic of that night? And as decades-old secrets about the history of the town and Marianne’s family come to light, can they work together to save both their businesses? 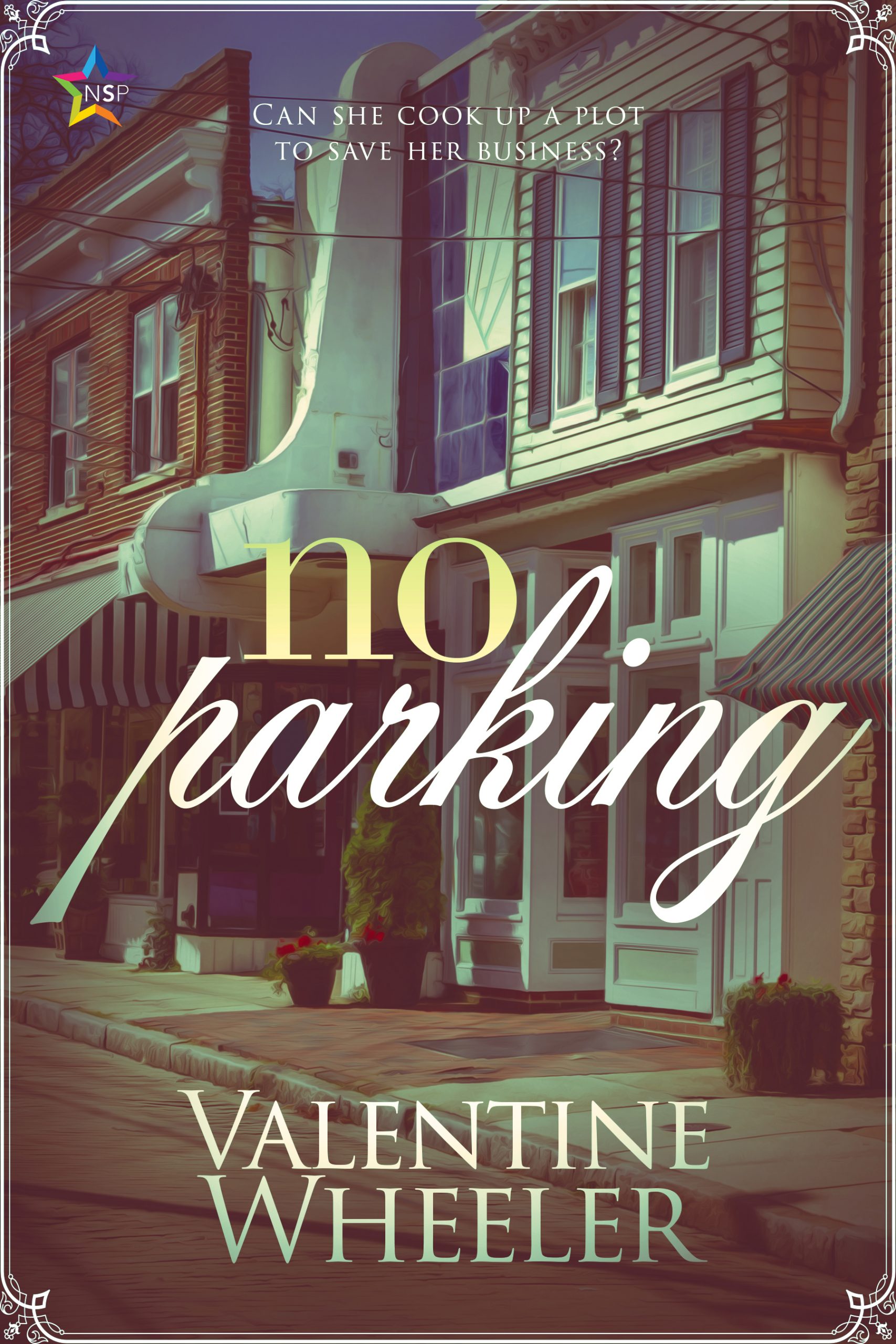 I loved writing NO PARKING for a lot of reasons, but especially the research portion. I ate so many baked goods and so much shawarma and basturma at our local restaurants. I interrogated my lawyer customers at my post office about the finer points of real estate law. And I made so many spreadsheets. NO PARKING is a story about community. It’s about love, and change, and how some things stay the same and some things don’t and how that’s okay. And it’s a story about how people come together in a meaningful, purposeful way.

But my favorite part of the process? That had to be making the town of Swanley.

NO PARKING is set in a fictional Massachusetts town halfway between Boston and Worcester, south of I-90. It’s an area I know well; I live just a dozen miles north of where I’ve set Swanley, work ten miles to the east, and have friends scattered around the region.

Everybody knows everybody in a town like Swanley. One of my favorite bits of the novel takes place in a restaurant, where Marianne is describing how interconnected the community is:

In this room right now, I see two of my kids’ teachers, three customers, and somebody who was a Boy Scout with my ex-husband. My second cousin was eating at PJ’s next door with his girlfriend, whose ex-wife is the sister of our mail carrier. Everybody knows everybody’s business.

I love worldbuilding. It’s the element of a story crucial to drawing me into a narrative, and its lack can knock me out of a story instantly. It’s not about the amount of worldbuilding, really; it’s more about cohesion, the way characters move through the world in a way that feels whole. Really good worldbuilding isn’t conveyed through infodumps (although I must admit, I do love a good infodump), but through the assumptions characters make and the glimpses we get of how they interact with each other and the world around them. It’s easiest to see the complexity and consistency of a coherent world in speculative fiction–Phillip Pullman or N. K. Jemisin, for example–for obvious reasons. But contemporary fiction has similar challenges.

A community is a Venn diagram of relationships. My best friend might be your neighbor, and your kid’s soccer coach could be my best friend’s cousin. Your doctor’s married to my mechanic and they all go to the same synagogue as my favorite high school teacher. When you’re working with a small place–a bottle episode of a novel, almost–it’s townbuilding, not worldbuilding. You’re not changing the laws of physics: you’re carving out a little piece of the world and populating it with people who love each other, or hate each other, but above all think they know each other.

Marianne has lived in Swanley for nearly sixty years. It’s where her parents met, where her great-grandfather’s family settled after the Civil War. It’s where she was married and where her kids were born, and she knows the people in it maybe a little too well. There’s Kevin, her ex-husband who retired from local politics but still knows everything that’s going on in town; Zeke, her one employee, who lives with his great-grandfather and goes to college online when he’s not working at the bakery; Tori and Lila, librarian and lawyer; Ray and Fatima, acquaintances who’ve been around so long they’re basically family; Doris, mail carrier and her wife Natasha, Zeke’s old math teacher.

We all think we’re the hero of our own story, and we sometimes forget that everyone else feels the same way. It boggles Marianne to realize that Rana, the owner of the restaurant next door and a new face in a tight-knit community, knows some of the people she knows, and that she has her own stories and relationships with them.

What Marianne ultimately realizes is that she herself is one thread in the fabric of Swanley, one tied to a hundred others, and each is crucial to this world they’ve built in the hills and valleys of central Massachusetts. Zeke’s boss, Kevin’s ex-wife, Rana’s neighbor, Ray’s friend: Marianne’s life is interwoven with all of theirs, and now Rana’s is, too.

This book is a love letter to the small towns and cities in Massachusetts I’ve come to know over the last decade. I wrote it for the customers who I see finding new friends and old in the lobby of my post office, and for the ones who nearly come to blows over long-held slights or fresh anger over line-cutting or snide remarks. And I wrote it for all the people who’ve ever sat in a traffic commission meeting and thought, hey, this would be the perfect place to find love.

Valentine lives in Boston, where she goes by Lis and spends her time citing obscure postal regulations and arguing with a preschooler. She serves as Fiction Editor and Logistics Wizard at Wizards in Space Literary Magazine and as a first reader at various SFF publications. Her short fiction can be found at Ninestar Press.