Tom Doyle is joining us today with his novel The Left-Hand Way. Here’s the publisher’s description:

Poe’s Red Death returns, more powerful than ever. Can anyone stop him before he summons an apocalyptic nightmare even worse than himself?

In The Left-Hand Way, the second book of Tom Doyle’s contemporary fantasy series, the American craftsmen are scattered like bait overseas. What starts as an ordinary liaison mission to London for Major Michael Endicott becomes a desperate chase across Europe, where Endicott is both hunted and hunter. Reluctantly joining him is his minder from MI13, Commander Grace Marlow, one of Her Majesty’s most lethal magician soldiers, whose family has centuries of justified hostility to the Endicotts.

Meanwhile, in Istanbul and Tokyo, Endicott’s comrades, Scherie Rezvani and Dale Morton, are caught in their own battles for survival against hired assassins and a ghost-powered doomsday machine. And in Kiev, Roderick Morton, the spider at the center of a global web, plots their destruction and his ultimate apotheosis. After centuries of imprisonment, nothing less than godlike power will satisfy Roderick, whatever the dreadful cost. 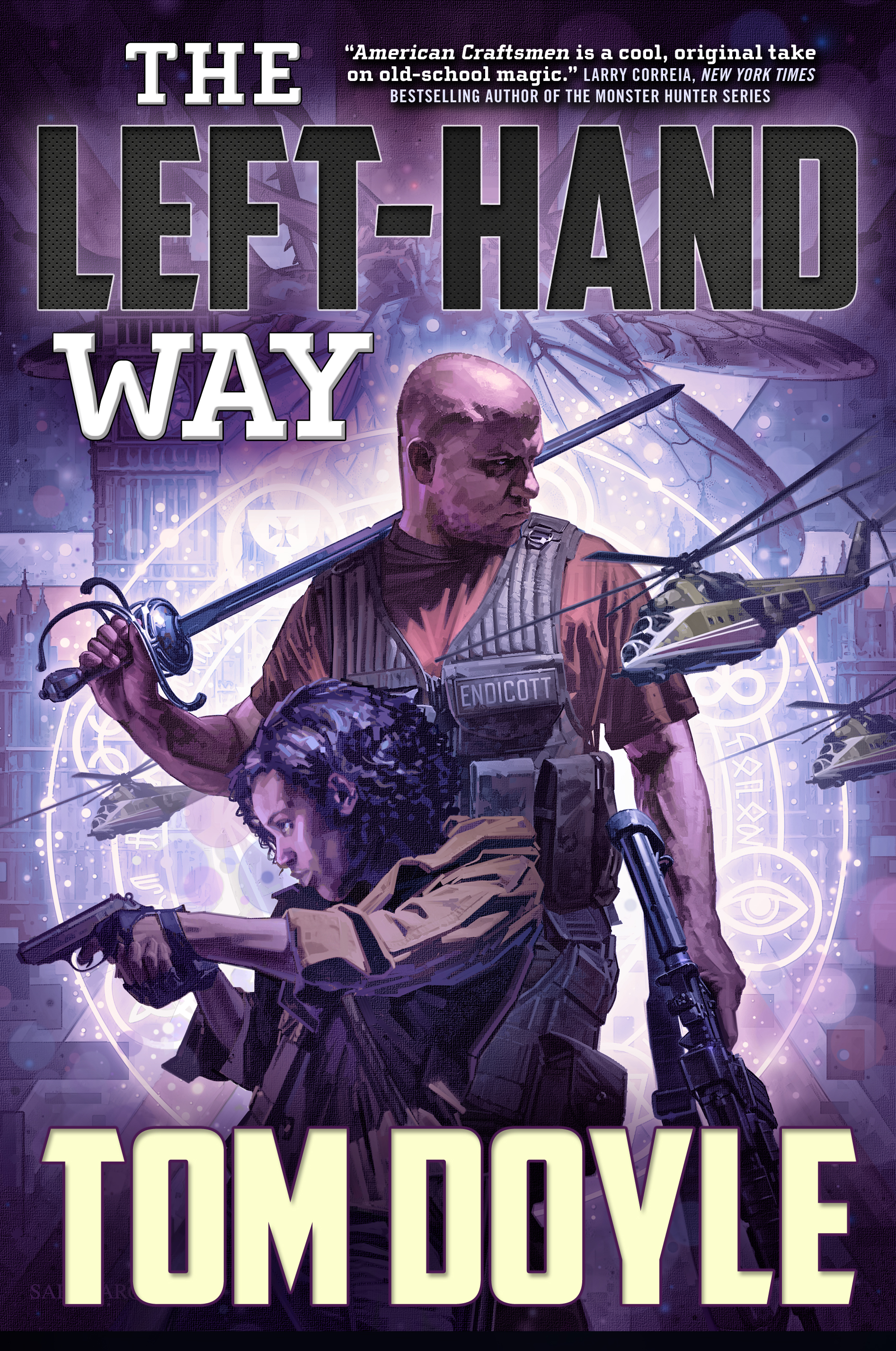 Imagine that a single family of magician soldiers held the inspirations for Bronte’s Jane Eyre, Kipling’s Kim, Conrad’s Marlow, Buchan’s Hannay, Fleming’s Bond, and Moorcock’s Eternal Champion. Imagine further that this same interracial family descended from famous African, American, and English historical roots. What new stories would this open up within the British literary and spy traditions, and what would this background mean for the family’s fictional modern descendant?

Such a saga might fill several volumes, but as a backstory for one character it couldn’t easily fit into the narrative flow of a single book, particularly a fantasy thriller. A few of the details are in my story proper, but more of them went into an appendix. Therefore, and I’m almost ashamed to admit it, the appendix from The Left-Hand Way is my favorite bit. This seems so very wrong because, as in our bodies, the appendix is supposed to be an extra, useless bit that dangles from the end. For some readers, appendices even lead to a visceral conditioned response of loathing and aversion.

How did my delight in an appendix come about? In my first book, American Craftsmen, which also had a lot of historical and literary backstory, the publisher asked for a genealogical endnote to help sort out the characters in the protagonist’s family. I was naturally worried about doing this–images of Tolkien’s list of Númenórean kings haunted me. But it turned into a complete hoot. For narrative flow, I’d had to cut many of the neat little tales I’d imagined for my protag’s ancestors; now, I could briefly show off them and their factual and fictional allusions without impeding my main story.

In the sequel, I didn’t wait for the publisher to ask; I planned on an appendix. This time, it was for the family of the most interesting new character in the book: Grace Marlow (the woman on the cover above from the awesome Dominick Saponaro). I also had an agenda for this appendix: I was going to create a mini-cryptohistory of British literary and spy fiction that both highlighted and created interracial elements.

As noted in the publisher’s description, Royal Navy Commander Grace Marlow works with MI13, the equivalent of MI5 and MI6 for magician soldiers. From Grace’s last name, one might guess one of her early English ancestors: Christopher Marlowe (the “e” later gets dropped). Before his premature demise, he has a child with a daughter of Francis Walsingham (whom Elizabeth I called her “Moor”). A formerly enslaved person and a distant relative of Queen Charlotte marry into this line, and the eventual result is Edward Marlow (the secret basis for Edward Rochester in Jane Eyre).

The other side of the family descends from Tituba of Salem, famous for her involvement in the witch trials. In history, she survives that horror, but her fate afterwards is unknown–the perfect opening for a cryptohistorian. In my version of events, her descendants fight for their freedom on the British side during the American Revolution. After the war, they go to England, where eventually Jane Howe, the inspiration for Jane Eyre, is born.

Because of the experience of her colonial American ancestors, Grace has no affection for the U.S., and as noted above in the book’s description, she and her family are particularly hostile to the Endicotts. Instead, she is completely devoted to the UK craft service. Like my other characters, Grace feels the weight of her family’s history–she is literally haunted by her ancestors. But this history is also an inspiration to heroic action.

Besides simple entertainment, one of the main points of my appendix material is that, as with stagings of Shakespeare and portrayals of famous TV and movie characters, it is fun and interesting to re-imagine character identities in classic novels. Perhaps the most visible examples of this I’ve seen on social media are the gender-flipped readings of classics, which seem to broaden interpretations and readership. Though I hope readers of The Left-Hand Way are caught up in the adventure story, I encourage you to look at the appendix at any time during your progress through the book, and please let me know what you think of its brief cryptohistorical outline (and also how many historical and literary references you spot there and elsewhere in the text).

Tom Doyle is the author of the American Craft fantasy series from Tor Books. Tom’s collection of short fiction, The Wizard of Macatawa and Other Stories, includes his WSFA Small Press Award and Writers of the Future Award winners. He writes science fiction and fantasy in a spooky turret in Washington, DC. You can find the text and audio of many of his stories on his website.