Tex Thompson is joining us today with her novel Medicine for the Dead. Here’s the publisher’s description.

The story of Appaloosa Elim continues.
Two years ago, the crow-god Marhuk sent his grandson to Sixes.
Two nights ago, a stranger picked up his gun and shot him.
Two hours ago, the funeral party set out for the holy city of Atali’Krah, braving the wastelands to bring home the body of Dulei Marhuk.

Out in the wastes, one more corpse should hardly make a difference. But the blighted landscape has been ravaged by drought, twisted by violence, and warped by magic – and no-one is immune. Vuchak struggles to keep the party safe from monsters, marauders, and his own troubled mind. Weisei is being eaten alive by a strange illness. And fearful, guilt-wracked Elim hopes he’s only imagining the sounds coming from Dulei’s coffin.

As their supplies dwindle and tensions mount, the desert exacts a terrible price from its pilgrims – one that will be paid with the blood of the living, and the peace of the dead. 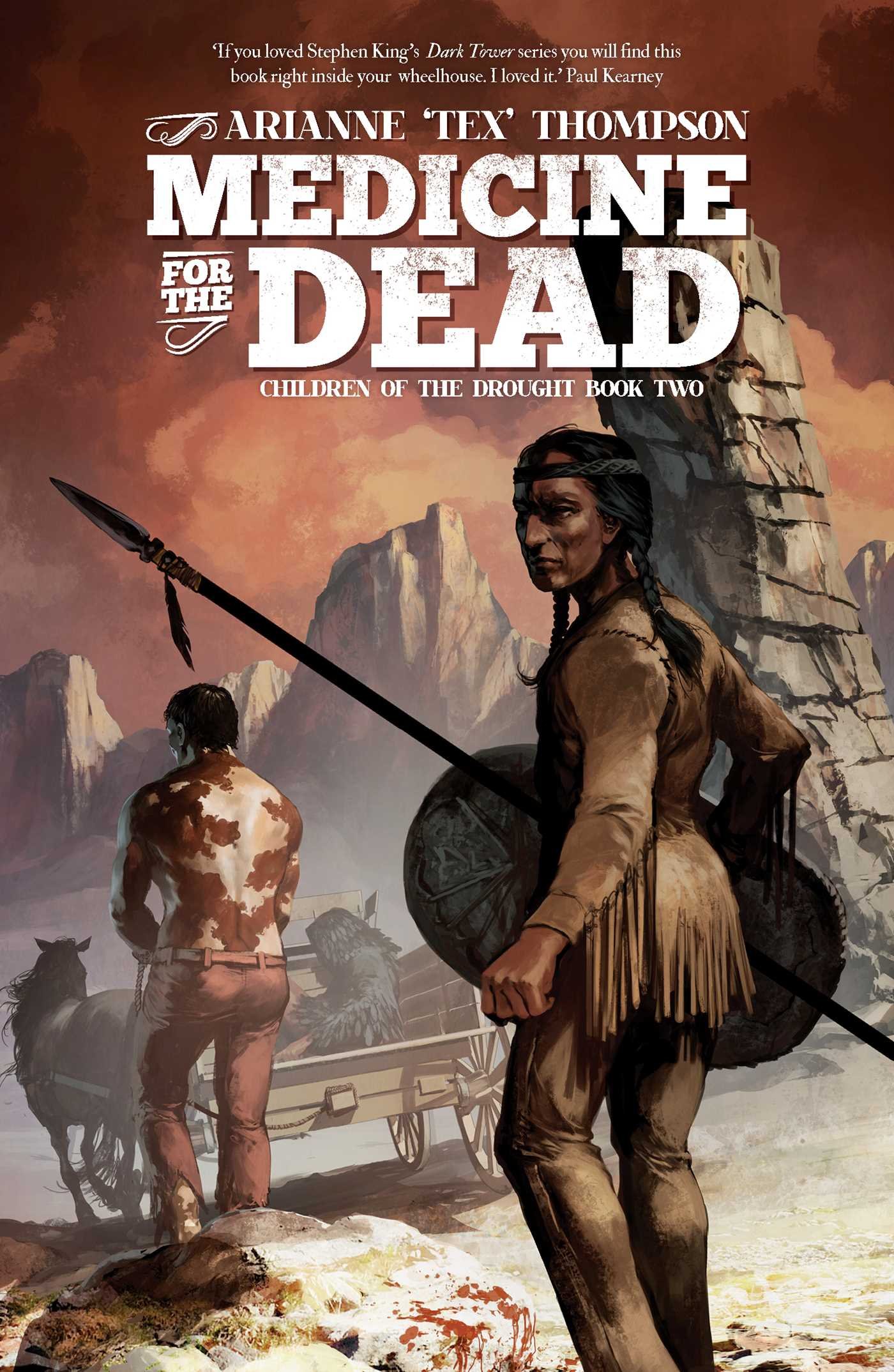 It’s one of those great unspoken rules of fantasy: you can’t have a quest without a journey, and you can’t have a journey without a map.  Well, YOU can (of course you can!), but I couldn’t. Medicine for the Dead is basically Lord of the Rings, if Frodo and Sam were a couple of Native Americans, and the One Ring was a corpse getting riper by the day, and the quest involved getting said corpse through Mordor and home for burial without getting killed by demons, drought, or a vicious case of magical dysentery. You definitely don’t want to tackle a thing like that without an up-to-date Fantasy Fodor’s in your back pocket.

The thing is, we couldn’t do a traditional Tolkienesque fantasy map, because this really isn’t a traditional Tolkienesque fantasy world.  It’s based on the American Southwest, for one thing, and for another, it’s not a stable place: within the space of a generation, borders have been drawn and redrawn, towns have changed names or been burnt to the ground, and even ‘static’ features like rivers have been poisoned, dammed, diverted, or just dried up – all of which have direct, occasionally dire plot-consequences. After much agonizing and some brilliant advice from my Facebook posse, I realized that this would need to be a map in two layers: a prettier, nicely-drawn “then” and a rough, improvised “now”.

Here’s the funny thing about maps, though: somebody has to make them.  I don’t mean in the real world – I have my world-famous Swedish cartographer on tap for that – but there in fantasyland.  Fictionally speaking, who drew that conveniently paperback-sized thing at the front of the book, and why? 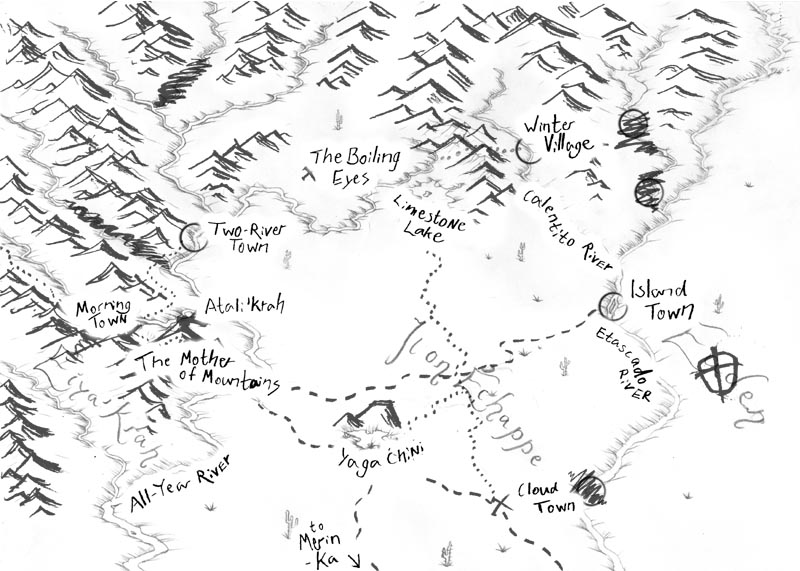 In this case, the top layer was easy enough: we just gave a piece of charcoal to Our Heroes and let them modernize the map. But who would have drawn the original?  In order to make it visually distinct from those sharp charcoal marks, we wanted a delicate, flowing ink-pen style – but whose hand would have been holding the pen?  What kind of old-world artist would have had access to all this disputed territory?

I mused. I meditated. I despaired. And then it hit me as suddenly as if I’d been slapped with a mackerel: fishmen.

Or mereaux, as they call themselves.  They share water rights to everything that drains into the secondary-world Gulf of Mexico, so if we can imagine that the original version was sketched into something more waterproof than paper, they could have been doing land surveys even while those inscrutable earth-persons were busy killing each other.

And y’all, I can’t even tell you what a blast I had.  Have you ever thought about what the world would look like from a freshwater perspective?  Let me tell you: it is ridiculous, amphibious, toe-curling fun (and in this case, it also involved a fair bit of French.)

After all, if you spend most or all of your life in rivers, you probably think of them as something more nuanced than ‘rivers’. Maybe you have a natural navigation system somewhere in your vocabulary.  Maybe river systems are kind of like families, which – in your matriarchal society – might mean that ‘grandmothers’ are rivers that drain directly to the sea, ‘mothers’ drain to grandmothers (‘aunties’ do too, but unlike mothers, they have no tributaries), ‘daughters’ drain to mothers, and so on, until you get to ‘babies’ too shallow to swim in.  And if ‘in-laws’ are those to the north or east, then you can distinguish them from others to the south or west – so if somebody tells you that Belle-Mère Froide is Grand-Mère Étourdie’s second daughter-in-law, you’ll know that you can get there by swimming upstream and taking the second fork to the east.  (Naturally, you will orient your map labels accordingly, because everyone who’s not an illiterate earthbound clown reads from upstream to downstream.)

And of course, hardly any of this navigational navelgazing made it into the printed map, because you can only fit so much fabulosity into an 8″ x 7″ square.  But I’ve had tremendous fun imagining a web-fingered cartographer detailing every bend in those rivers, happily drawing in little decorative cacti to fill in those mysterious inland bits. And we did manage to sneak one bit of gratuitous geekery into the final product. After all, there are indigenous humans to the west and settler humans to the east, but what does one call this disputed desert, this vast dry stretch of no-man’s-land in between?

‘Il On Échappe’: a fanciful old phrase that might have once meant ‘it escapes us’ or ‘one doesn’t know’, but is now a calligraphic shrug – a timid river-dweller’s ‘Here There Be Dragons’.  And as Our Heroes will discover in brutally short order, that’s not the half of it…!

Arianne “Tex” Thompson is a home-grown Texas success story.  A relentless fantasy enthusiast dual-wielding a bachelor’s degree in history and a master’s in literature, Tex has since channeled her interests into an epic fantasy Western series that kicked off in 2014 with the release of ONE NIGHT IN SIXES and its forthcoming sequel, MEDICINE FOR THE DEAD.   In her spare time, she works as a writing instructor, editor for the DFW Writers Conference, and professional comma placement specialist.  Find her online at www.thetexfiles.com and on Twitter as @tex_maam!