Swati Teerdhala is joining us today with The Archer at Dawn. Here’s the publisher’s description:

Romantic intrigue and electric action fill the gripping sequel to The Tiger at Midnight, a world inspired by ancient Indian history and Hindu mythology. Perfect for fans of Sabaa Tahir and Victoria Aveyard.

A stolen throne. A lost princess. A rescue mission to take back what’s theirs.

For Kunal and Esha, finally working together as rebels, the upcoming Sun Mela provides the perfect guise for infiltrating King Vardaan’s vicious court. Kunal returns to his role as dedicated soldier, while Esha uses her new role as adviser to Prince Harun to seek allies for their rebel cause. A radical plan is underfoot to rescue Jansa’s long-lost Princess Reha—the key to the throne.

But amidst the Mela games and glittering festivities, much more dangerous forces lie in wait. With the rebel’s entry into Vardaan’s court, a match has been lit, and long-held secrets will force Kunal and Esha to reconsider their loyalties—to their countries and to each other.

Getting into the palace was the easy task; coming out together will be a battle for their lives. In book two of Swati Teerdhala’s epic fantasy trilogy, a kingdom will fall, a new ruler will rise, and all will burn. 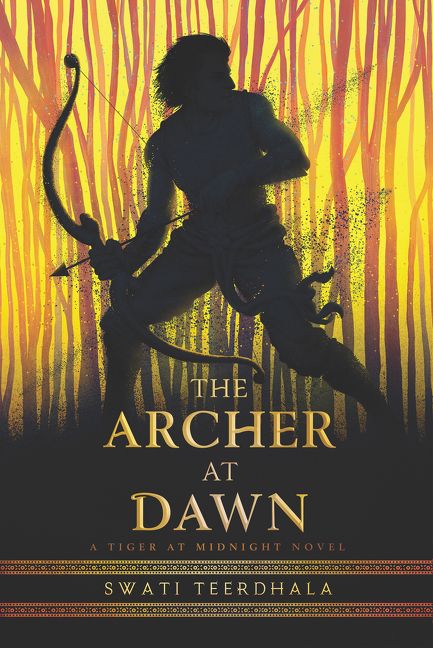 It’s funny how outlining a book is rarely ever the whole story. Yes, you are literally writing down the whole story, but in so many ways, it’s only the start of a journey. When I first put pen to paper for the outline of The Archer at Dawn, I tried to think of everything I’d want to see in the second book of a series. Heavy intrigue, hair-raising action, higher and higher stakes, slow burn romance. Those all were expected. But there was one thing in particular on my list that surprised me.

One of the characters, Alok. Somehow he had wiggled his way onto my “must have” list for The Archer at Dawn.

You see, I had a plan for this character and it wasn’t very big. He was a breath of decency, a bit of comic relief when needed, a friend I’d definitely love to have in real life, but not much more to the story itself. At least, at first.

Alok is an essential source of support to his best friend Kunal, one of the main characters. He loves to bring Kunal down a peg, but would also lay down his life for him. But his role as a joker older brother figure was too small for him. His interactions with Esha, the other main character, clinched the deal. Alok can be both wise and maddeningly flippant. Esha is a living legend that takes no prisoners. In all honesty, it was a surprise to me how well they got on in the one scene they had. They almost instantly found ways to connect–mostly at Kunal’s expense. So that one scene became a few more.

Every time Alok showed up in a scene, he ended up stealing it away. Alok is the sidekick that delights in his role but also, somehow, manages to convince you that he shouldn’t be one. And after a while, I gave in.

The Archer at Dawn is not necessarily a light book. It dives deeper into the psyches of both Kunal and Esha, a questioning soldier and a burdened rebel. It watches them make hard choices and deal with unforeseen consequences. And through it all, they grow. But they don’t grow on their own. It’s the cast of characters, their friends and teammates, who help them along the journey and I found that to be close to real life.

On your journey to become the best version of yourself, I bet you there’s an Alok. Someone who sees you for who you are and yet pushes you to be better. Who adds levity when the world feels like it’s falling apart. Who is ever reliable and ever a true friend.

Alok was my surprise in this book and my favorite thing. But don’t tell him, he’s insufferable enough as it is.

Swati Teerdhala is a storyteller at heart. After graduating from the University of Virginia with a BS in finance and BA in history, she tumbled into the marketing side of the technology industry. She’s passionate about many things, including how to make a proper cup of tea, the right ratio of curd to crust in a lemon tart, and diverse representation in the stories we tell. The Tiger at Midnight is her debut novel. She currently lives in New York City.