Nancy Kress is joining us today with Sea Change. Here’s the publisher’s description:

New from the Nebula Award winning author of Beggars in Spain: A riveting climate-change technothriller of espionage, conspiracy, and stakes so high they could lead to the destruction of humanity itself. In this environmental page-turner, activist lawyer Renata Black―covert member of the Org―must go deep underground to unravel the truth behind the ecological disaster that has paralyzed the food industry and destroyed her family.

Operative Renata Black has a serious problem: an ordinary self-driving house. But this house, causing a traffic snarl, also has the Org’s teal paint on the windowsill.

In 2022, GMOs were banned. A biopharmaceutical caused the Catastrophe: worldwide economic and agricultural collapse, and personal tragedy for lawyer Caroline Denton and her son. Ten years later, as Renata Black, she is a member of the Org, an underground group of scientists hunted by the feds. But the Org’s illegal food-research might just hold the key to rebuilding the worlds’ food supply.

Now there’s a mole in the Org, and Renata is the only one who can find out who it is. At risk is the possibility of an even more devastating climate collapse. For answers, she will go to her legal clients from the Quinault Nation. Will there be time to reveal the solutions that the world has not been willing to face? 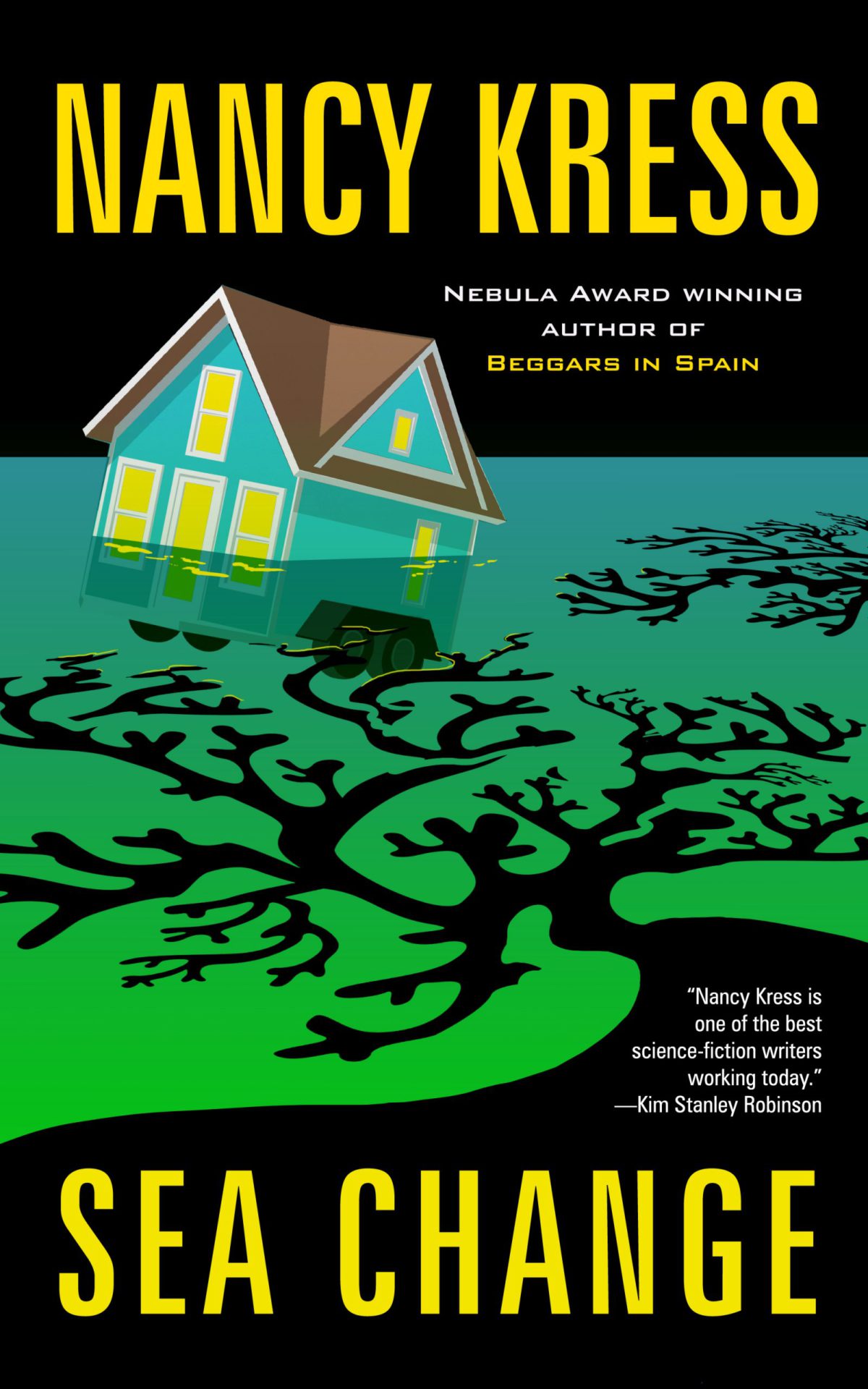 It probably doesn’t sound good for an author to say that her favorite bit is a story’s opening: What, you mean it’s all downhill from there?  I sincerely hope not.  However, it is nonetheless true that my very favorite bit of my new stand-alone novella from Tachyon, Sea Change, is the opening few paragraphs:

The house was clearly lost.

I watched from my seat on the second-story balcony of the Cinnamon Café as the tiny house, a ten-by-fifteen imitation Cape Cod with a single dormer, wavered in the middle of the intersection below. It turned to the left, to the right, back to the left, ending up crosswise to the intersection. Traffic honked and stopped. The house didn’t budge, probably recalibrating. An ancient Lexus with an ancient driver tried to swerve around the house, but there wasn’t enough room. The driver leaned out and shouted at the house—as if that would do any good. Whoever was inside had the shutters closed.

Several homeless, who were not supposed to be in this historic-preservation neighborhood, jeered and laughed.

The robo-server wheeled up to my table. “Can I bring you something else, ma’am?” I waved it away; my beer was only half drunk. And the show below was too entertaining to gulp the rest, even though I would be late to meet the new recruit. Let him wait. From now on, his life would include a lot of waiting.

The old man in the Lexus, surprisingly spry, jumped out of the car and pounded on the door of the house. Nothing. People in cars, both drivies and manual, leaned out of their windows, looking impatient. One of the homeless threw a plastic cup at the house’s back wall. It missed. A few pedestrians stopped to watch, smiling, probably gloating that they weren’t the ones whose important rushing was being interrupted by an edifice with confused GPS.

Still the house didn’t move. Mobile conveyances this large weren’t permitted on city streets unless occupied, although that didn’t guarantee that the occupants weren’t asleep or drunk or too busy having sex to notice that their dwelling wasn’t moving. At the very least, by now the mandatory pull-to-curbside auxiliary engine should have engaged. Somewhere in the distance, a siren sounded, probably cops trying to get through the increasingly snarled traffic.  Grinning, I leaned forward for a better view.

Why is this my favorite bit?  After all, the novella is about more serious stuff (ocean toxins, genetically modified crops), more dramatic stuff (an underground resistance organization), more emotional stuff (I wish now that I’d titled the novella Sea Change: A Love Story, but I didn’t think of it in time).  But this lost house is my favorite bit.  Maybe because:

The larger point here—if there is one—is that what matters to the writer may not be the same thing that matters to the reader—at least, not at the beginning of the story.  Hopefully, those two will have converged by the story’s end.  For Sea Change, you will have to decide for yourself if I made that happen.

Nancy Kress is the author of thirty-six books, including twenty-nine novels, four collections of short stories, and three books on writing.  Her work has won six Nebulas, two Hugos, a Sturgeon, and the John W. Campbell Memorial Award.  Much of her fiction concerns genetic engineering, including Sea Change (although not her forthcoming space opera from Baen, The Eleventh Gate).   Kress’s fiction has been translated into two dozen languages, including Klingon, none of which she can read.  In addition to writing, Kress often teaches at various venues around the country and abroad, including a visiting lectureship at the University of Leipzig, a 2017 writing class in Beijing, and the annual intensive workshop Tao Toolbox, which she teaches every summer with Walter Jon Williams.  She lives in Seattle with her husband, writer Jack Skillingstead.