Steven S. Drachman is joining us today to talk about his novel Watt O’Hugh and the Innocent Dead. Here’s the publisher’s description:

On the morning of Wednesday, September 24, 1879, I awoke in a prison in Montana. I did not imagine that evening might find me sprawled beneath a great and ferocious sand crab on a rancid beach, deep in the Hell of the Innocent Dead. But that is indeed where I wound up. The moral, if there is one: never plan your day too inflexibly.

THE WAIT IS OVER: THE CLASSIC ADVENTURE CONCLUDES….

In this, the final book of the trilogy, Watt O’Hugh, the dead/not-dead, Time Roaming Western gunman, travels the length and breadth of the sixth level of Hell, recruiting a shadowy army that might storm the borders of the Underworld, free humanity and the inscapes from the clutches of the Falsturm and his Sidonian hordes, and stave off the Coming Storm. 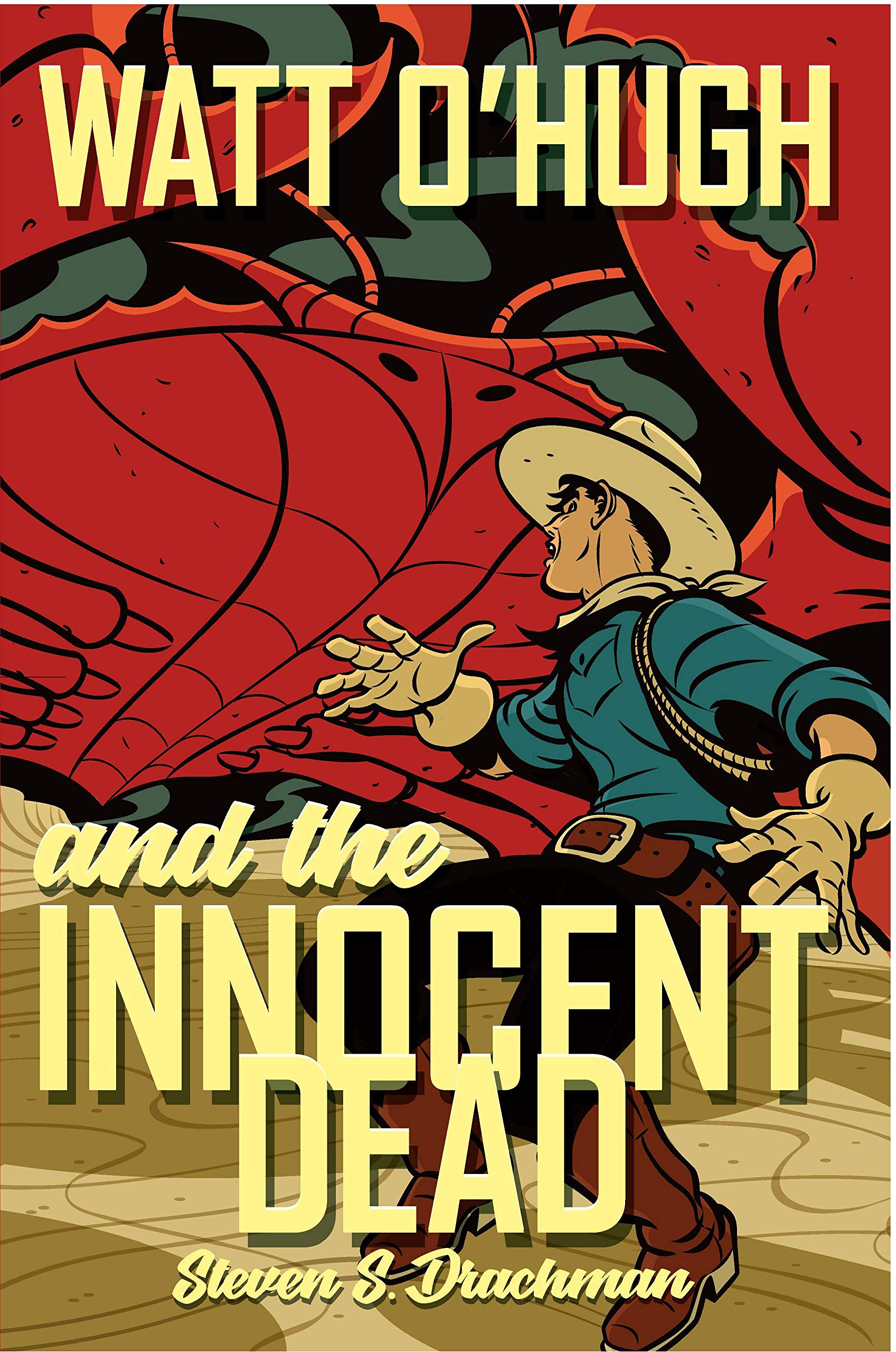 In my new novel, Watt O’Hugh and the Innocent Dead, my eponymous 19th century Western gunslinger and time roamer battles a demon army in a Hell out of ancient Chinese myth.

He also battles a band of escaped convicts in Yuma alongside his old friend Oscar Wilde. (“While I understand him to have been skilled with your ‘comedy of manners,’ ” Watt notes, “the guy was also pretty tough when he wanted to be.”)

A huge and ferocious sand crab nearly swallows him whole.

Watt shadows the faux-Utopian American secessionist movement known as the Sidonians, who are responsible for much of the pain in Watt’s life, led by one Allen Jerome, mathematician, former financier, outlaw and false messianic cult leader.

He visits the Sharon Springs resort town in New York, where he takes the cure in their magical waters. Watt is still a youngish man, but he’s lived a distinctly unhealthy life, and, on the best of days, he probably suffers from about half the ailments the Sharon Springs waters were said to cure.

Sharon Springs, a once-glamorous and once-renowned former-resort, where my grandfather vacationed every summer as a little boy, as the 20th century just dawned, is a place I’ve always wanted to go. I wish I could visit it in its former glory, and I am envious that Watt does.

But as fond as I am of Watt — I pretty much agree with everything he says, after all — I wanted to call the second book in the series, A Princess of Sidonia (with apologies to Edgar Rice Burroughs, whose A Princess of Mars began the John Carter series). That was not a particularly popular choice around the office, and we went with Watt O’Hugh Underground instead. Still, I suggested it again as the title for Book 3.

I guess these are not really “princess books,” but you can see that there is something on my mind.

In Underground, the evil Allen Jerome muses that his movement would benefit from a strong and fearsome princess, with red hair, long legs, a terrifying battle cry and a hawk on her right shoulder, whom the people “might yearn for, to love from afar.”

And, Allen Jerome adds, “she must of course be beautiful.”

A queen, he explains, can be loved; but a princess can be loved in an entirely different fashion.

“You are allowed to gaze upon your princess,” he says, “and wish that you could marry her, and to think about what such a thing might be like. That is what drives your loyalty in battle.”

Soon Sidonia has its princess.

She is not precisely real; she is a simulacrum, or “skimmy” for short. It’s not so hard to conjure a skimmy if you have a heart and head full of evil and greed, as well the assistance of an Otherworld Fabricator, both of which Allen Jerome has.

At first, she is content to incite her troops to battle, and to be fearsome, as advertised. But by the start of the most recent novel, she has begun to change, and to wonder.

“You cannot know,” she tells Watt, “what it was like for me to awaken one day, filled with a personality that someone else had created for me, but no memory. No memory, just someone else’s purpose.”

As she and Watt sit down to a game of chess in a little shop in the Grey City, a looming future-metropolis that portends the world’s demise, she says, “I know that I will win. And I have never played this before. I don’t even know what this is. I won’t even think about it while I am doing it. It will be like yawning, like blinking. It will just happen. And I will win.”

I wanted to name the book after this villain, a killer skimmy with so much death behind her, who suddenly awakens and wonders whether it is even possible to understand what she is, and what she could be.

At one point, she says to Watt, “Did you know that an octopus has three hearts, and that its blood is blue-green?”

Watt knows just why she thinks that this is important to know.

She is saying, Like an octopus, I am different, yet alive.

STEVEN S. DRACHMAN is a writer and critic whose work has appeared in The New York Times, The Washington Post, Entertainment Weekly, The Village Voice and The Chicago Sun-Times. He lives in Brooklyn with his wife and two daughters.