Sarah Pinsker is joining us today to talk about her debut novel,  A Song for a New Day. Here’s the publisher’s description:

In this captivating science fiction novel from an award-winning author, public gatherings are illegal making concerts impossible, except for those willing to break the law for the love of music, and for one chance at human connection.

In the Before, when the government didn’t prohibit large public gatherings, Luce Cannon was on top of the world. One of her songs had just taken off and she was on her way to becoming a star. Now, in the After, terror attacks and deadly viruses have led the government to ban concerts, and Luce’s connection to the world–her music, her purpose–is closed off forever. She does what she has to do: she performs in illegal concerts to a small but passionate community, always evading the law.

Rosemary Laws barely remembers the Before times. She spends her days in Hoodspace, helping customers order all of their goods online for drone delivery–no physical contact with humans needed. By lucky chance, she finds a new job and a new calling: discover amazing musicians and bring their concerts to everyone via virtual reality. The only catch is that she’ll have to do something she’s never done before and go out in public. Find the illegal concerts and bring musicians into the limelight they deserve. But when she sees how the world could actually be, that won’t be enough. 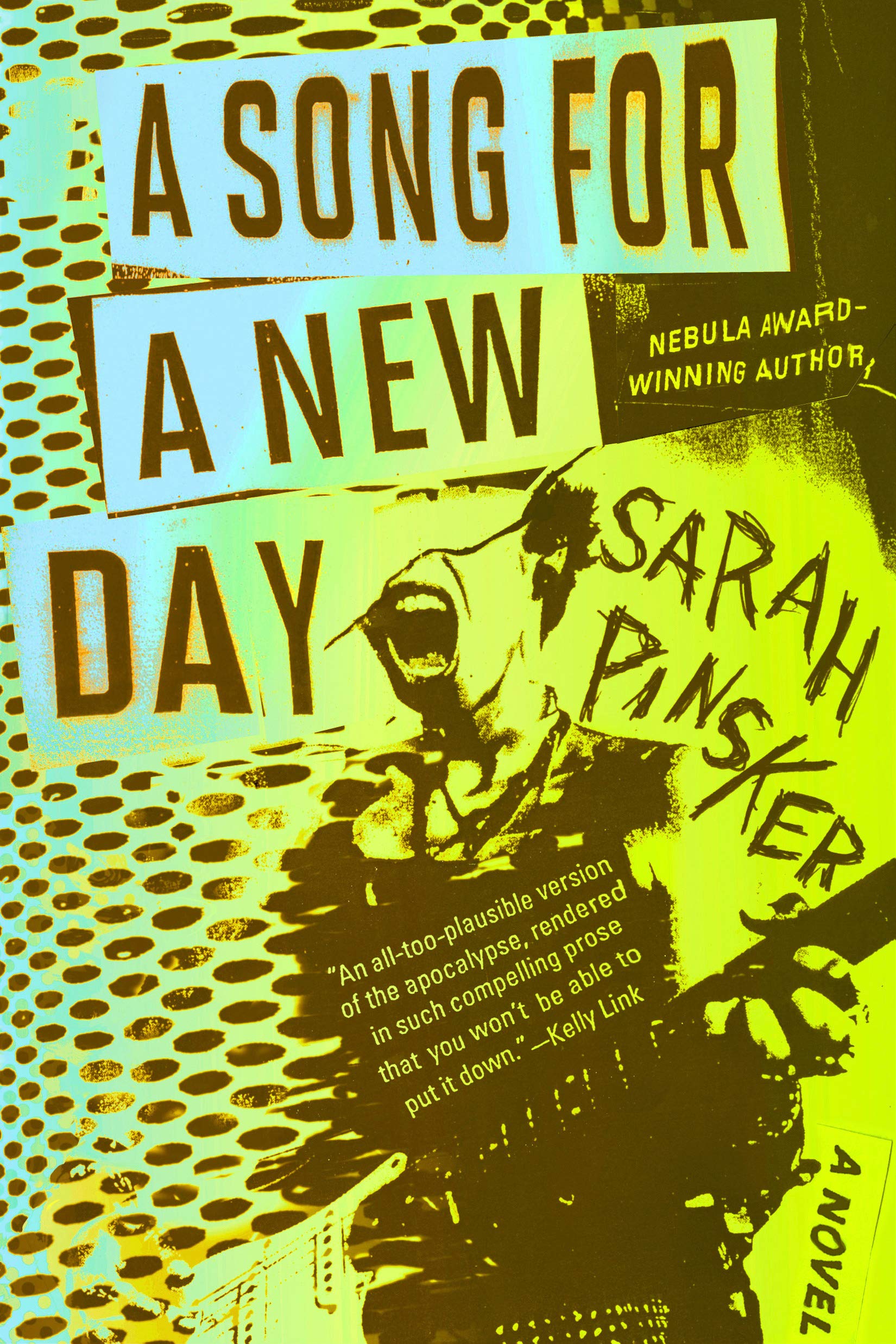 I had all these ideas for talking about my favorite bit for a particular character, like when Rosemary rejected all my plans for what she should do next and took over writing herself, or about the joy and challenge of making people feel live music in prose, which truly is one of my favorite things. Then I realized that I had a different favorite bit that I wanted to talk about that I don’t know if anyone will actually notice: the playlist hidden in the table of contents.

I’ve always loved books with soundtracks. That includes books that reference songs or bands, or books where the author later publishes a list of music they listened to while working on the book. That didn’t feel like enough for this book. Sure, it’s dystopic, but it’s also a love letter to live music, and to musicians who inspire, and to the feeling of inspiration that a song can bring. It needed all the songs I could seed into it.

When I started writing A Song For A New Day, it helped me to envision it in song format. Song format is usually written as something like ABACAB or ABABCBA or AAAAAAAAAA if you’re Bob Dylan, where A is a verse and B is a chorus and C is a bridge. So this was basically a game I played with myself: one character’s parts were the A parts, and then the other had the B parts. Then I got really meta and made C, the bridge, take place on an actual bridge. I wrote a chapter labelled 16 bar solo where Luce traveled to sixteen bars on her own. I originally wrote that chapter in verse. I knew it would have to change, but entertaining myself was what counted in that particular draft. (Also, within those sections I had 33 chapters and one labelled A Minor Third, for a total of 33 1/3. I AM A DORK.)

At a certain point, my editor, Rebecca Brewer, pointed out the big A and B part sections took the reader away from the other character for way too long. She was right. It didn’t work to carry narrative momentum, so I sadly broke it up until it didn’t really resemble a song anymore…except that some of the parts still remain, as chapters titled Bridge, 16 Bar Solo, and Coda.

A couple of chapters are named after venues in the book, and one is an inspirational poster, when Rosemary isn’t yet thinking much about music. But then my real fun began in naming the rest.

The rules for the other game I created for myself:

1) The song title –and preferably the lyrics too — had to be relevant to the chapter.

2) It had to make sense on some level for a reader who didn’t notice the reference.

3) It had to be relevant to the character who was the focus of that chapter.

4) It was okay to alter the title a little bit.

So, in the chapters narrated by Luce Cannon, the musician whose upward trajectory was halted by big societal changes, the song titles are taken from bands that she might have heard and been influenced by, or else from her own songs. The name of the first chapter, “172 Ways,” seems to come fairly obviously from the first scene, but later Luce writes a song of the same name, thinking about the same incident. Her other chapters come from songs I think she would have liked, or songs she wrote herself. Songs by Bikini Kill, Frightwig, the Rock*A*Teens, Thunderbitch, L7, the Pixies, Amy Ray, Disappear Fear, the Shondes. Songs a young queer musician might have discovered and claimed for herself.

Rosemary Laws, who grew up isolated in a country changed by the same events, starts out with an inspirational poster instead of a song. After that she gets chapters with titles taken from fictional bands more contemporary to her, or songs that her parents might have played for her, or songs that she discovered as she researched music and got into bands and then the bands that influenced those bands. Her first chapter named after a song is a song that’s fictional to us but meaningful to her. Her next songs after that are by the Clash and Malvina Reynolds and Joan Jett, stuff that could still be pretty ubiquitous. Then, as she starts doing research and learning more about music that had previously just been background in her life, she gets some stuff she might have had to look to find, like The Selecter, X-Ray Spex, the Slits, the Cliks, the Distillers, Thalia Zedek, the Butchies, Team Dresch, and some stuff she might have found when she started broadening her tastes a little bit. Since she spends a lot of time researching Baltimore bands I got to hide a couple of my local favorites in there, too, like the Degenerettes and Manners Manners.

(There’s also a clean version with a couple of substitutes at https://open.spotify.com/playlist/0HQYcRl9BewVodLL4sJVlq?si=JQZYSBxRTbCtCmr7_Bf8pg)

When their songs are woven into one playlist, we’re back to my love letter to music, but also the ongoing love letters that I get from music. Ninety minutes of music that fueled and continues to fuel my writing, along with a million bands I couldn’t fit narratively, from the Raincoats to Alabama Shakes to Santa Librada to Big Joanie, and a handful more that I hid in other easter eggs within the narrative. A ninety minute sashay through a selection of narratively relevant girl punk, queer punk, punk punk, folk, rock, and ska that inspires me, incites me, and sets me on fire.

A Song for a New Day buy links

1 thought on “My Favorite Bit: Sarah Pinsker talks about A SONG FOR A NEW DAY”