Sometimes I feel like I’m introducing you to My Favorite People, as is the case with Monte Cook. His writing reflects all the things that I like about him as a person, smart, sly, and makes you think. He is an amazing worldbuilder and creates landscapes and cultures that seem real. Best of all he is a storyteller and thinks about the way that stories intersect with our everyday lives and shape us as people. So the fact that he has a short fiction collection out? So much excitement.

And what’s his Favorite Bit?

Small Matters is a brand-new collection of some of my short fiction. A few stories saw publication elsewhere, but most of them are brand new. I like them all the way a father loves all his children, so it’s difficult to choose a favorite bit. I’m sure that’s likely true for all writers. But since Mary’s going to force me to make a choice, I will. 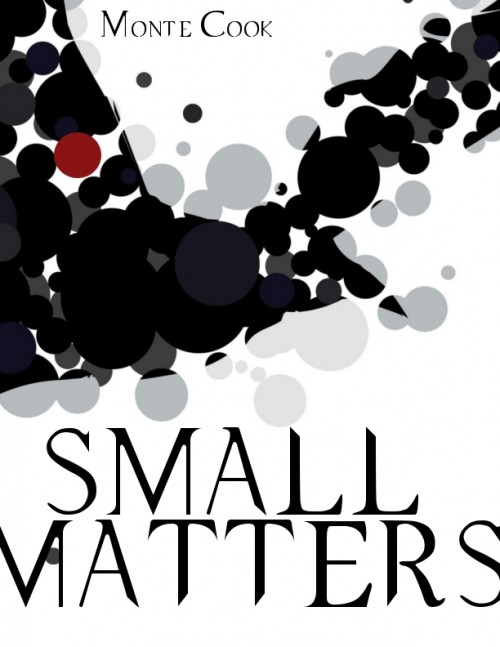 My favorite bit is the protagonist of the first story in the collection, Familiar Things. The story is fantasy tale about a wizard duel, but the entire thing is told from the point of view of the familiar of one of the duelists. Our point of view character, then, is a raven–or at least, that’s the form that she has chosen to take this go-around, for she’s been the familiar of many spell casters. Our raven has been saddled with the embarrassing name, Maven, by her kind but uncreative wizard. This is how Familiar Things begins:

I’m not a bird. I know, I look like a bird. Yellow beak. Black feathers. The wings, it might seem, are a dead giveaway. I understand. Still, you have to trust me. I’m not a bird.

For one thing, I’m telling you a story. Have any in-depth conversations with a sparrow lately? Hear the latest gossip from a duck?

I didn’t think so.

So let’s just accept that I’m not a bird, and move on.

Maven then relates the events of the story, but as she does we encounter a surprisingly deep conflict. The conflict–the real conflict–lies not in the magic battle that the wizards fight, but within Maven. Being a magical creature, she has many rules she must follow, but as events unfold, she must also make choices that may change the outcome of the duel–and what she wants to do lies in direct conflict with what she must do. To explain the seeds of this inner turmoil, or its outcome, would be to spoil the story, so let me just say that I’m extremely happy with how it was able to resolve itself. Many of the stories in this collection are the result of me painting myself into corners with dilemmas that I (and the characters involved) had to think their way out of. Small Matters also provides a number of experiments that I made with points of view and in particular narrative voice. Of all the voices, I think Maven’s voice is perhaps my favorite bit.

Small Matters: http://www.stoneboxpress.com/small-matters/
Montecook.com: www.montecook.com
Numenera.com: www.numenera.com
BIO:
Monte Cook is an award-winning author and game designer who has written two novels, a comic book series, and hundreds of roleplaying game products as well as numerous short stories. He attended the Clarion Science Fiction and Fantasy Workshop in 1999, and the Launchpad Workshop in 2010. He recently published a collection of short fiction called Small Matters, from Stone Box Press. He is currently at work on a new roleplaying game, Numenera, to be released in 2013.
Did you know you can support Mary Robinette on Patreon!