Megan E. O’Keefe is joining us today with her novel Steal the Sky. Here’s the publisher’s description:

Detan Honding, a wanted conman of noble birth and ignoble tongue, has found himself in the oasis city of Aransa. He and his trusted companion Tibs may have pulled off one too many cons against the city’s elite and need to make a quick escape. They set their sights on their biggest heist yet – the gorgeous airship of the exiled commodore Thratia.

But in the middle of his scheme, a face changer known as a doppel starts murdering key members of Aransa’s government. The sudden paranoia makes Detan’s plans of stealing Thratia’s ship that much harder. And with this sudden power vacuum, Thratia can solidify her power and wreak havoc against the Empire. But the doppel isn’t working for Thratia and has her own intentions. Did Detan accidentally walk into a revolution and a crusade? He has to be careful – there’s a reason most people think he’s dead. And if his dangerous secret gets revealed, he has a lot more to worry about than a stolen airship. 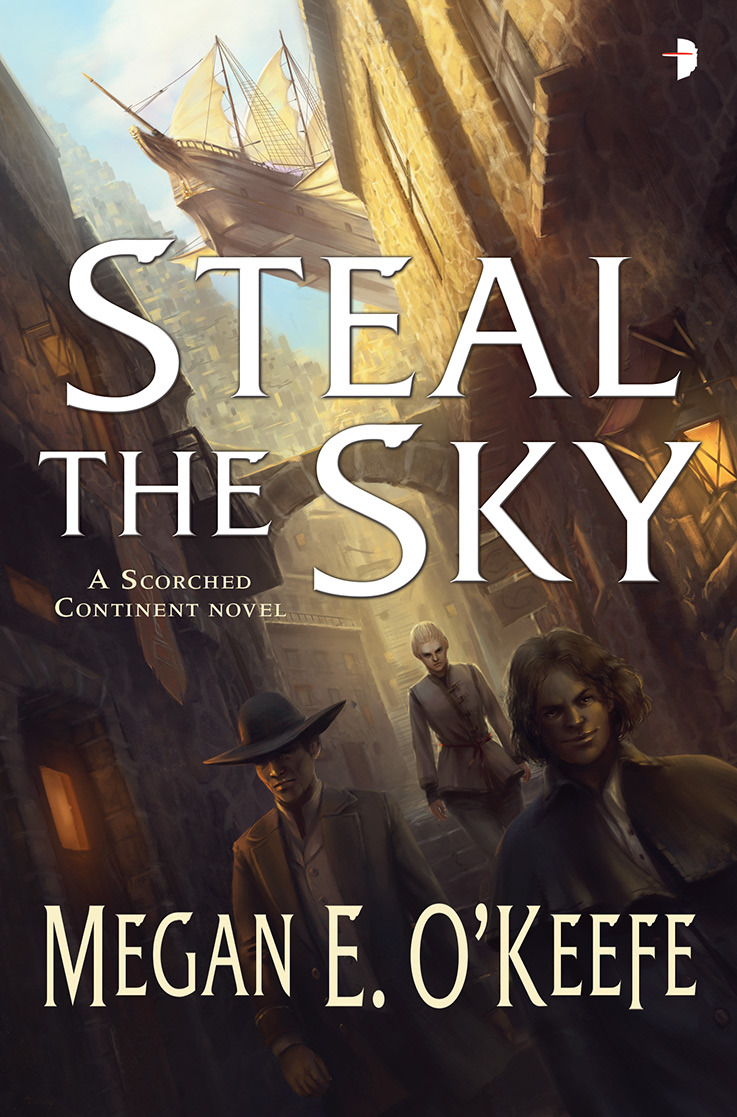 If I’m being truly honest, my favorite bit of Steal the Sky changes based on my mood. There are a lot of moving parts in the book, and which one tickles me the most at any given time varies quite a bit. I suspect that’s probably true for most writers – it’s like asking us to pick the favorite part of a dear pet. But what I come back to again and again, what I feel is truly the heart of the book, is the deep well of friendship between Detan, my conman protagonist, and his best friend Tibs.

When we first see them together in Steal the Sky, they’ve already been friends for awhile. They rely on one another to keep their tempers in check and their heads on straight when they’re neck deep in mischief. They know one another’s deeper secrets, and the darker aspects of each others’ natures, and accept those things. They even help each other to overcome them when necessary.

But while their relationship runs deep, they tease one another ruthlessly and don’t hesitate to call out when one or the other is being an idiot. Though, to be fair to Tibs, it’s usually Detan being the doofus.

Disagreements between them are hashed out quickly, and usually with sly jibes. In the excerpt below, Detan has just upset Tibs by using his family name – Honding – to gain social leverage over someone who had pushed his temperamental buttons. The Honding name is an old and respectable one. One Detan’s powerful aunt is very protective of having used in unscrupulous circumstances.

When he and Tibs were back on the solid rock of Aransa, the old rat gave him a sturdy punch in the arm.

“Pits below!” He jumped and rubbed at the ache. “I was perfectly safe navigating the vents. I got a good look at them from above.”

“It’s not the vents I’m about.” Tibs said as he marched ahead, taking the lead back into the winding ways of the city. Detan ruffed his hair in frustration, then shook himself and scurried to catch up. Dusk was descending over Aransa, the purple-mottled sky making Tibs little more than a silhouette before him. He stomped with every step he took, wiry fingers curled into knobby fists at his side. Detan slowed his steps and shoved his hands in his pockets, ducking his head down like a whipped dog.

“Is it the clothes?” Detan ventured, “Because, well, I figured that—”

Tibs stopped cold, pinning Detan down with his gaze as easily as he’d drive a nail through a board. “Dame Honding is going to hang you from your toenails, using your name with just anyone like that.”

“You had better write her a letter, sirra, before the rumors get back.”

Detan sighed and sat down hard on the top of a low, stone fence, heedless of the dust that undoubtedly coated his backside. “I suppose. Wouldn’t want the old badger to worry, eh?”

“I suggest you do not address it to ‘the old badger’.”

“She’d fly right out here and beat you with her parasol.”

Strong friendships are an element of fiction that I love to find in stories, and I’m delighted to add my own manic duo to the bunch.

Megan E. O’Keefe was raised amongst journalists, and as soon as she was able joined them by crafting a newsletter which chronicled the daily adventures of the local cat population. She has worked in both arts management and graphic design, and spends her free time tinkering with anything she can get her hands on.

Megan lives in the Bay Area of California and makes soap for a living. It’s only a little like Fight Club. She is a first place winner in the Writers of the Future competition and her debut novel, Steal the Sky, is out now from Angry Robot Books.