Maurice Broaddus is joining us today to talk about his novel Pimp My Airship. Here’s the publisher’s description:

All the poet called Sleepy wants to do is spit his verses, smoke chiba, and stay off the COP’s radar—all of which becomes impossible once he encounters a professional protestor known as (120 Degrees of) Knowledge Allah. They soon find themselves on the wrong side of local authorities and have to elude the powers that be.

When young heiress Sophine Jefferson’s father is murdered, the careful life she’d been constructing for herself tumbles around her. She’s quickly drawn into a web of intrigue, politics and airships, joining with Sleepy and Knowledge Allah in a fight for their freedom. Chased from one end of a retro-fitted Indianapolis to the other, they encounter outlaws, the occasional circus, possibly a medium, and more outlaws. They find themselves in a battle much larger than they imagined: a battle for control of the country and the soul of their people.

The revolution will not be televised! 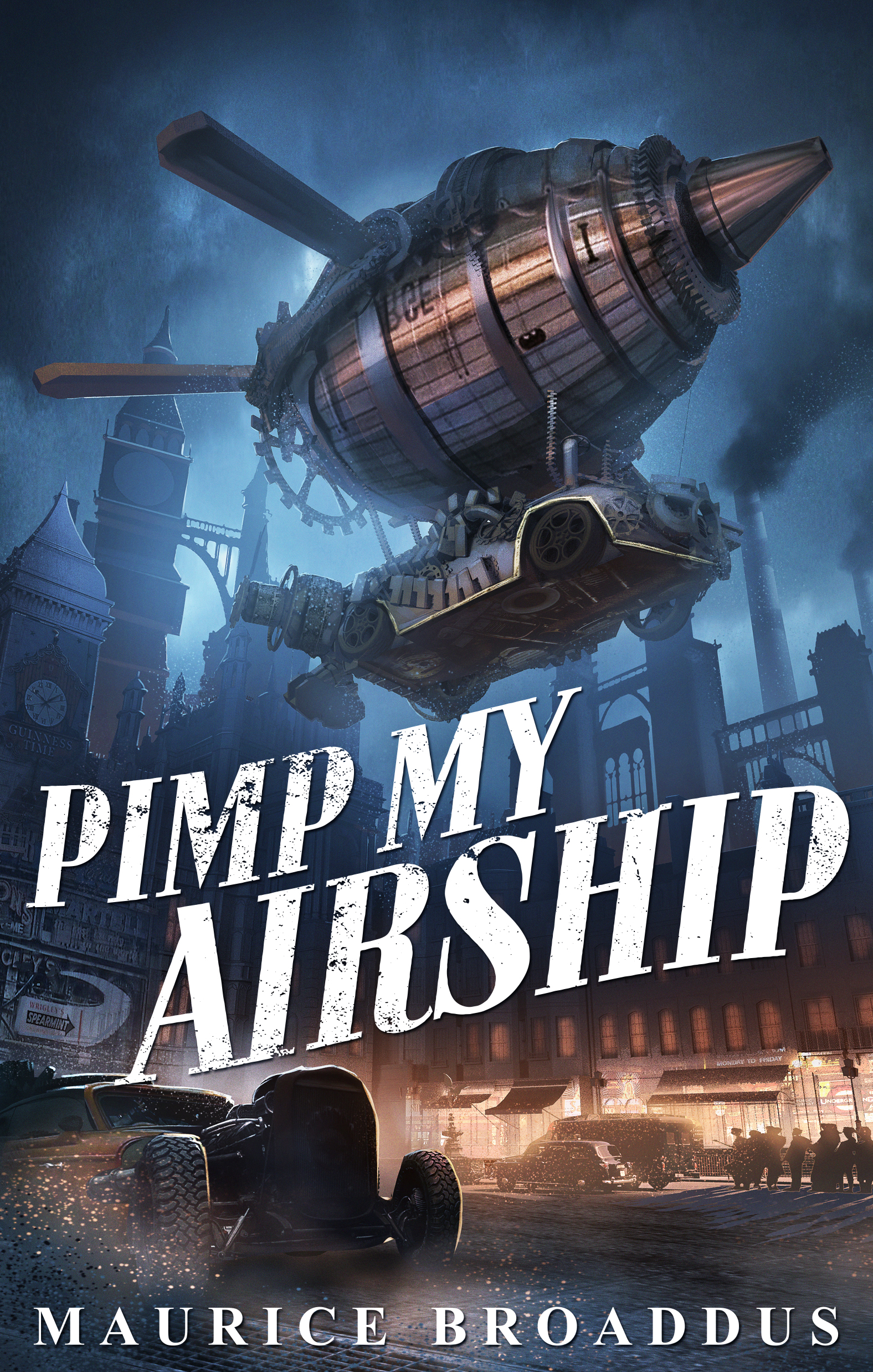 Narrowing down my favorite bit of Pimp My Airship was more of a struggle than I thought it would be. Even the project coming to life was fun. I was on Writing Excuses talking about the Hero’s Journey of one of the main characters in the story, forgetting that I write for me and this book wasn’t out. Or due to be published. Or even submitted anywhere. Well, WRX fans started reaching out to me about it. Since the book only existed as a draft, I wanted a second opinion on it. So I sent it to Jason Sizemore of Apex Books since he bought the original “Pimp My Airship” short story and was a huge fan. As a friend and a fellow writer, I asked for him to take a look at a sample of the manuscript. He got through the first three chapters and wrote back, “I’ll take it.” I told him that I wasn’t submitting it, I just wanted to know if I had something. He said “you do and I’ll take it.” Thus, how Pimp My Airship came to be.

“Pimp My Airship” is the reason I have a steamfunk (think “steampunk” except through a black cultural lens) universe. It’s the world of Buffalo Soldier, “Steppin’ Razor,” and nearly a dozen short stories. It’s a world where America lost the Revolutionary War, Albion still rules the world, and details the impact of all of this on the lives of black people in this society. Most importantly, Pimp My Airship is an assemblage of my favorite collection of characters.

So, back to the Hero’s Journey. One way to look at a character’s story arc is to give them a goal and then throw as many obstacles in front of them to keep them from attaining it. With that in mind…

Meet Sleepy. He’s a poet. He’s had a long, hard day at work scrubbing steam pipes. At the end of his shift, he sheds his work clothes for his evening wear as he hits his favorite club to spit a few verses. After his set, all he wants to do is smoke a little “chiba” and get high.

That’s it. My dude just wants to get high. #heroicgoals

Meet (120 Degrees of) Knowledge Allah. Now astute readers of my work may remember him as a “throwaway” character from my debut novel, Kingmaker. He was in the book for one page but chewed the scenery so thoroughly he moved through space and time to this alternate reality. He’s a former member of the sect the Lost Nation. He sees something in Sleepy. A voice. A kindred spirit. A partner. He wants Sleepy to join him in The Cause. Knowledge Allah is what we’ll call the “prime obstacle.”

Subsequent obstacles include: the COPs, the criminal underworld, a(n accidental) riot, more COPs, and … you get the idea. The lengths I go through to keep Sleepy from attaining his goal is my penultimate favorite bit which builds to my ultimate favorite bit, the moment he … reaches his goal. The scene is a tribute to a classic issue of Grant Morrison’s run on the comic book, Animal Man, called “The Coyote Gospel.” Sure, only comic books geeks will get it, but I start smiling every time I think about it. #beepbeep.

The thing about the Hero’s Journey is that many times, once the hero reaches the goal they think they wanted, it opens up new goals and purpose for them. It reveals desires they never thought they wanted. That’s the rest of the story for Pimp My Airship. A romp through a retrofuture version of Indianapolis, a place that I love, with characters that I love. I’m just glad readers pushed me to release it into the world. I’d call my readers my true favorite bit … but that would just sound weird.

Maurice Broaddus is a community organizer and teacher. His work has appeared in magazines like Lightspeed Magazine, Weird Tales, Beneath Ceaseless Skies, Asimov’s, Cemetery Dance, Uncanny Magazine, with some of his stories having been collected in The Voices of Martyrs. His books include the urban fantasy trilogy, The Knights of Breton Court, the steampunk novella, Buffalo Soldier, the steampunk novel, Pimp My Airship, and the middle grade detective novel, The Usual Suspects. As an editor, he’s worked on Dark Faith, Dark Faith: Invocations, Streets of Shadows, People of Colo(u)r Destroy Horror, and Apex Magazine. Learn more at MauriceBroaddus.com.

1 thought on “My Favorite Bit: Maurice Broaddus talks about PIMP MY AIRSHIP”