Today we have a middle reader for your consideration, The Sword of Six Worlds, by Matt Mikalatos. Here’s how the book is described.

Validus Smith has three goals. Stay alive. Save the world. Finish her homework.
For centuries the paladins protected the Earth from a creeping darkness known as the Blight. That all changed when a new enemy destroyed the paladins, plunging the free worlds into danger. Validus Smith—an ordinary girl in an ordinary town—is next in line to become the paladin. Untrained, unsure of her destiny, and hunted by monstrous forces, she must recover the fabled Sword of Six Worlds, the only weapon capable of defeating the Blight. But in an unfamiliar world of monsters, talking animals and living rocks, can an ordinary girl like Validus survive?

And what is Matt’s Favorite Bit?

I love the moral simplicity of many fantasy novels, especially children’s novels. Heroes on white horses battle villains in black armor, and though there are frightening moments when all appears lost, the hero triumphs and justice prevails. All of my favorite childhood stories, from Tolkien to Star Wars, happily drew a line between good and evil and I never questioned who was on which side. 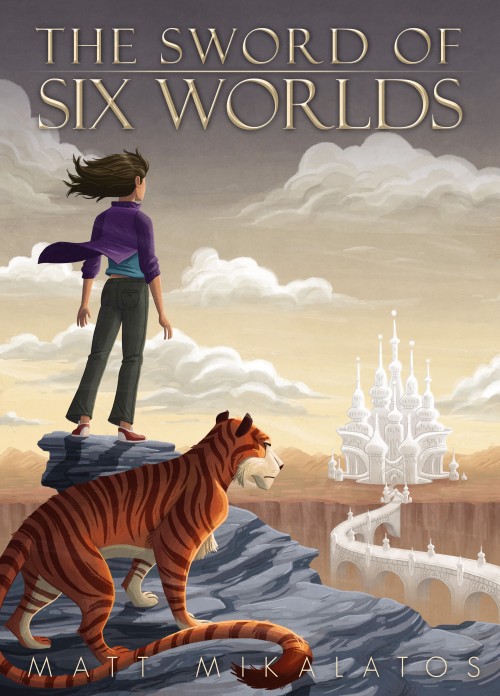 As I started writing my own children’s fantasy novel, I drew similar lines. On one side I had a normal human girl named Validus Smith who was chosen to protect the Six Worlds, an alliance of fantasy realms. Validus is only a middle schooler, but she is kind, brave and honest. On the other side I had Silverback, a violent, power-hungry creature bent on destroying the entire world. In my first draft, however, as Validus moved toward her final confrontation with Silverback, I felt increasingly uncomfortable with setting her up as as judge, jury and executioner. The message of violence as a solution to violence didn’t sit right in the context of the greater story.

The solution to this problem, which came in the second draft, is my favorite bit. Validus has a magic sword (of course!) called the Sword of Six Worlds. The sword has a variety of magical properties, but I added a new one in the second draft. If the Sword of Six Worlds is used in anger, or to get revenge or even out of necessity, it will break into a thousand pieces. It can only be used on a living being in a moment of compassion.

By compassion, I mean the ancient Greek concept. The Greek word (which sounds like someone sneezing and is σπλαγχν?ζομαι for the curious among you) means, “I feel compassion” but could be literally translated as “I am moved in my inward parts.” Let’s say, for instance, that you see an orphaned child. The Greeks would have said that compassion is when you see that child, alone and destitute, and you feel a sudden pain in your guts, the sort of pain that won’t go away until you do something to help. It’s not just sadness or pity, it’s a compelling desire to solve other people’s problems, to take care of them when they can’t take care of themselves.

This means that Validus can’t just find Silverback, break into his camp and murder him. To be victorious she needs to understand him. She might even need to learn to care for him. It doesn’t alter the moral simplicity: Validus is still the good guy, and Silverback is still evil. Validus still needs to stop him if she’s going to save the world. But she can only use the sword on Silverback if she uses it with compassion. That’s a little twist in the writing that pleased me.

It brought in new emotional weight, as well: here’s Validus, face-to-face with her enemy, and she knows that she needs to have compassion for him. But he has hurt her friends and has every intention of killing her family and destroying her world. How is that possible? How can she have compassion for someone like that?

I won’t give away the ending, but I will say this: Validus is a better person than I am. And that was one of my favorite bits as well.

1 thought on “My Favorite Bit: Matt Mikalatos talks about The Sword of Six Worlds”