Matt Mikalatos is joining us today to talk about his novel The Crescent Stone. Here’s the publisher’s description:

A young woman with a deadly lung disease . . .
A young man with a tragic past . . .
A land where the sun never sets but darkness still creeps in . . .

Madeline Oliver has never wanted for anything, but now she would give anything just to breathe. Jason Wu skates through life on jokes, but when a tragedy leaves him guilt-stricken, he promises to tell only the truth, no matter the price. When a mysterious stranger name Hanali appears to Madeline and offers to heal her in exchange for one year of service to his people, Madeline and Jason are swept into a strange land where they don’t know the rules and where their decisions carry consequences that reach farther than they could ever guess. 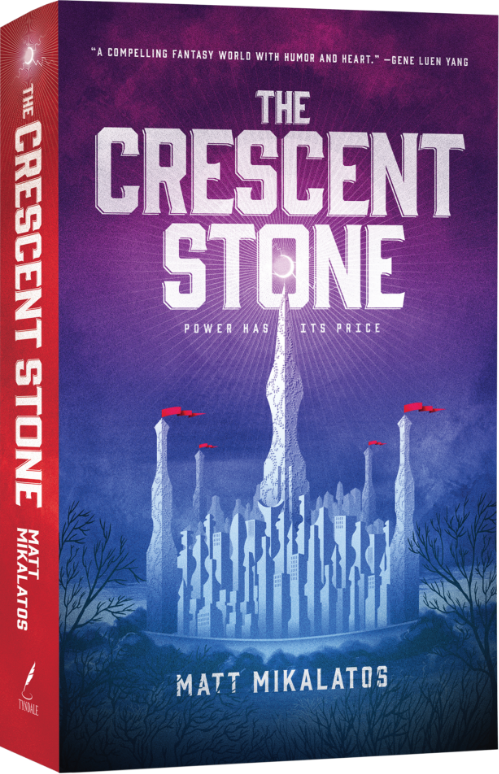 I have some favorite bits I can’t share because of spoilers, like a twist that comes late in the book but that I already set out in plain sight from early in the novel, or the secret world of unicorns that’s revealed in a battle scene. But I can share about a favorite bit that became a central part of the book, and that’s the oath taken by Jason Wu to tell the truth no matter what.

Jason has a terrible trauma in his recent past that he feels responsible for… something he lied about contributed to what happened. So he makes a decision to never lie again.

A character who never lies and is also a seventeen year old, it turns out, brings a lot of humor to the story as well as constantly complicating the plot. Jason can’t stop himself, whether it’s telling everyone about his high school principal’s toupee or explaining his plans in detail to the bad guys.

Here’s a scene where we see Jason’s truth-telling causing some future problems. Jason’s friend, David, sneaks him into the dungeons to meet one of the Scim — a captured warrior in a centuries old war:

The Scim chortled. “Truth teller, are you?” Its voice was like gravel spilt on concrete.

“We Scim say only three tell the truth: prophets, story-tellers, and fools. Which are you?”

“Ha!” The Scim straightened, seeming suddenly interested. “I will trade you, truth for truth. I am called Break Bones.”

Hmmm. Interesting. “I am called Jason.”

Break Bones smiled, opening his wide, frog-like mouth to reveal jagged and uneven teeth that were each the size of Jason’s pinky. “Why do you come to the Sunlit Lands?”

“To protect my friend,” Jason said. He thought about his answer for a moment. “And to lay to rest old ghosts. And you?”

The Scim stood and shook its chains. “To shatter the sun and bring five hundred years of darkness and terror to the Elenil and all who befriend them. To crush skulls and break necks. To build a temple of bleached bones that reaches to the great dome of the heavens. To humiliate every Elenil before their death, then tear down the works of their hands, stone by stone, beam by beam, brick by brick. Only then shall I rest.”

“Huh,” Jason said. “I guess that’s why they call you Break Bones.”

“The fountains will run with blood. The city walls will be shelves for their heads.”

“Better make a priority list, because if you tear down all their bricks and then try to use the walls as shelves, you’re going to have to rebuild the walls again. It’s a lot of work.”

“You mock me,” Break Bones said, his voice low. “The Scim are not fond of mockery, Wu Song.”

Jason cocked his head. “Is anyone fond of mockery?”

“I think you’re ticking him off,” David said.

Break Bone’s chest was heaving, his breath coming in staccato pants. “Humans. Are you even allowed in this prison?”

“We should go,” Kekoa said. “I think you get the point. The Scim are terrible monsters.”

Break Bone laughed, and the horrible sound of it filled the dungeon. “I like you, Wu Song. When I am free from this place I will honor you with a violent death. I will not humiliate you with captivity.”

“That’s nice,” Jason said. “Though I might prefer humiliation.”

Break Bones grunted, flashing his broken yellow smile. “What is the name of your friend? The one who is under your protection?”

Kekoa grabbed Jason’s arm and pulled him toward the door.

Break Bones wrapped his right arm into the chains holding him fast. “On the night I bring the darkness to you, I will come with her lifeless body, so you will know.” He slammed his arm forward, and dust puffed out of the wall where the chain was anchored. He yanked again, and the chain rattled, coming free. “So you will know you failed!” Break Bones roared, pulling the chain nearly all the way out. A distant trumpet sounded, and there was the sound of feet on the stone stairway.

As you might imagine, Madeline isn’t pleased to learn that Jason shared her name with a violent prisoner hidden beneath the city. Of course he tells her, because he always tells the truth.

Jason is part prophet and part comic relief. He ignores social niceties and his own safety to say what he thinks no matter what comes, and it creates a character who becomes equal parts charming and exasperating.

So there’s my favorite bit! Jason Wu, truth teller! I know you’ll love him, too.

Matt Mikalatos lives in the Portland, Oregon, area with his wife and three daughters.