Marie Brennan is joining us today to talk about her novel Turning Darkness Into Light. Here’s the publishers description:

Marie Brennan’s Turning Darkness Into Light is a delightful fantasy of manners, the heir to the award-winning Natural History of Dragons series, a perfect stepping stone into an alternate Victorian-esque fantasy landscape.

As the renowned granddaughter of Isabella Camherst (Lady Trent, of the riveting and daring Draconic adventure memoirs) Audrey Camherst has always known she, too, would want to make her scholarly mark upon a chosen field of study.

When Lord Gleinheigh recruits Audrey to decipher a series of ancient tablets holding the secrets of the ancient Draconean civilization, she has no idea that her research will plunge her into an intricate conspiracy, one meant to incite rebellion and invoke war. Alongside dearest childhood friend and fellow archeologist Kudshayn, Audrey must find proof of the conspiracy before it’s too late. 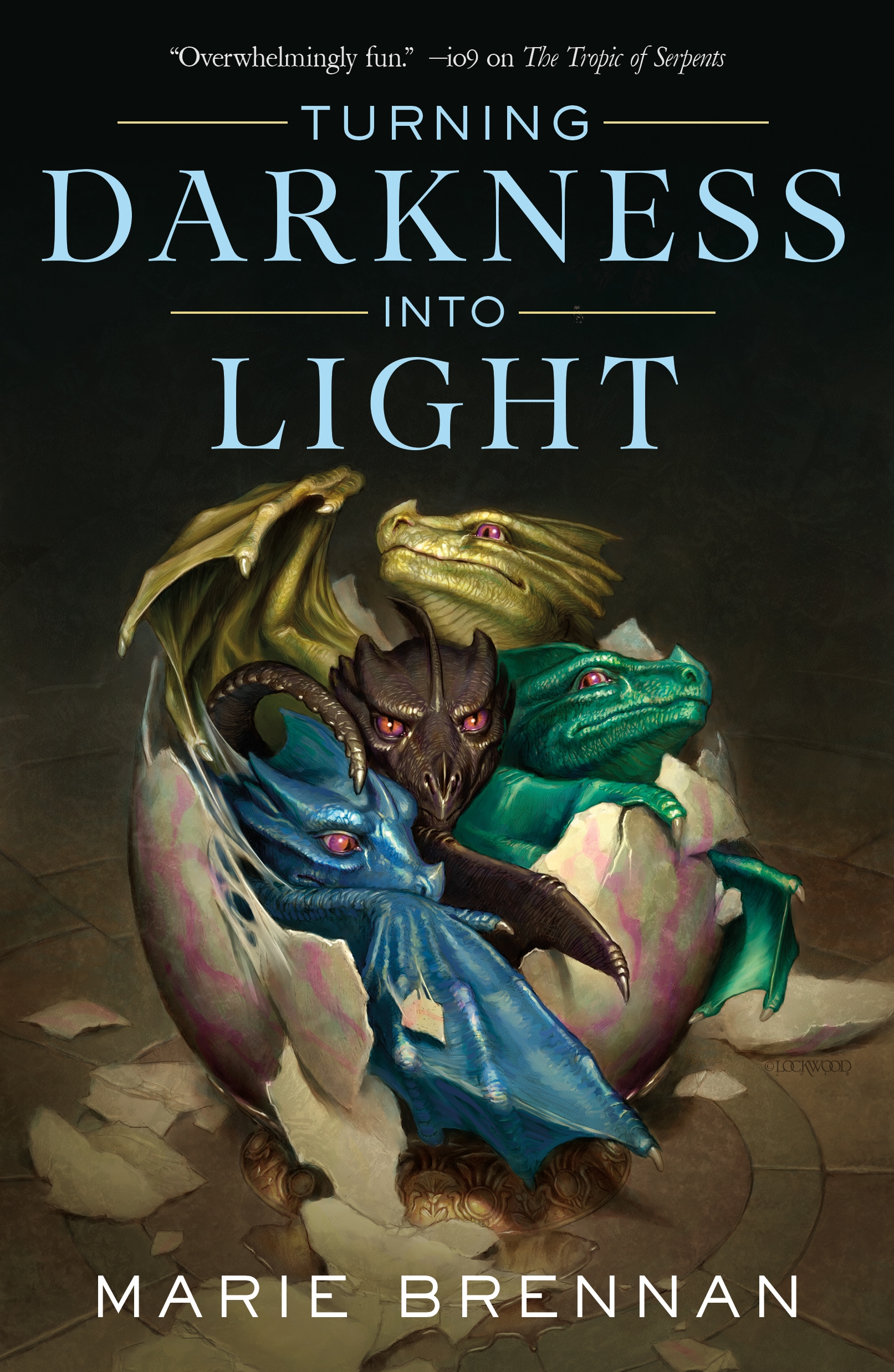 My favorite bit of this novel is a character I don’t like very much.

Which is a reminder to me that a likeable character and an interesting character are not the same thing. I forget that sometimes — because as a reader, I tend to check out of stories where I don’t like the main characters, even if I know the author intended it to be that way. I almost always need somebody whose company I enjoy; hanging out with a bunch of bastards is not my idea of a good time.

This guy is kind of a bastard . . . but when he walked onstage in this novel, utterly without me having planned for him, he brought a whole new dimension of the story to life. I knew, going into Turning Darkness Into Light, that the main character Audrey would be struggling in a lot of ways to establish herself in her chosen field, the study of the ancient Draconean language. She’s smart, but also young; she’s done some meaningful work, but she’s the granddaughter of Lady Trent, whose exploits were the subject of my previous five novels. Her grandfather, father, and mother are all well-respected scholars of one sort or another, and so I knew Audrey would be wrestling with the weight of her family’s reputation and the general public’s expectation that she ought to have done something amazing already.

But that’s mostly an internal thing. Which is why, partway into drafting the novel, I thought to myself, Audrey needs a rival. Lady Trent never really had one; apart from a short-story length spat with somebody who barely deserved the name of “scholar,” her challenges were of a different sort. So okay, I would give Audrey a rival.

Hard on the heels of that came a second thought: Audrey should have a romantic history with that rival.

Some characters get built. Others spring fully-formed out of my imagination like Athena from the head of Zeus. The moment he appeared, Mornett was handsome, brilliant, hailed for his achievements from a young age . . . and, in the most scathing condemnation Lady Trent is capable of delivering, not a reputable scholar. He’s Belloq to Audrey’s Indiana Jones.

Their romance is a thing of the past; it shows up in one of the novel’s three flashbacks. But oh, has it left its mark. Audrey has incredibly complicated feelings toward Mornett: respect for his intelligence, disgust for the ends to which he puts it, regret over his wasted potential, fury over what he did to her. She’s not over him, though she tries to pretend she is. She spends quite a bit of time and energy on trying to figure out what he’s up to — with regards to both the plot and herself personally.

We have so many stories that either focus on a romantic relationship or work one in alongside the rest of the plot. But we have relatively few about this kind of thing: a romance that failed, and the process of dealing with its aftermath (where “dealing” doesn’t mean “finding Mr. Right and being happy with him instead”). The ambiguity of it was fascinating to explore, and took the story in directions I had not planned for at all when I set out.

And in the end . . . I empathize with Aaron Mornett. That’s not the same thing as sympathizing; while I see where he’s coming from, ultimately I want to smack him for it. But I can understand why Audrey fell for him, and why it’s so hard for her to come to terms with having fallen out with him. I want to write the AU fanfic where things went differently.

Which is why he’s my favorite bit. He hooked my emotions from a completely unexpected angle, and brought fascinating kinds of tension to some of the novel’s key scenes — all without me having planned for him at all.

Marie Brennan is a former anthropologist and folklorist who shamelessly pillages her academic fields for material. She recently misapplied her professors’ hard work to Turning Darkness Into Light, a sequel to the Hugo Award-nominated Victorian adventure series The Memoirs of Lady Trent. She is the author of the Doppelganger duology of Warrior and Witch, the urban fantasies Lies and Prophecy and Chains and Memory, the Onyx Court historical fantasy series, the Varekai novellas, and nearly sixty short stories, as well as the New Worlds series of worldbuilding guides.