Kim Stanley Robinson’s 2312 is a finalist for both the Nebula and the Hugo award this year. I’m very pleased that he’s stopped by to talk about this novel.

The year is 2312. Scientific and technological advances have opened gateways to an extraordinary future. Earth is no longer humanity’s only home; new habitats have been created throughout the solar system on moons, planets, and in between. But in this year, 2312, a sequence of events will force humanity to confront its past, its present, and its future.

The first event takes place on Mercury, on the city of Terminator, itself a miracle of engineering on an unprecedented scale. It is an unexpected death, but one that might have been foreseen. For Swan Er Hong, it is an event that will change her life. Swan was once a woman who designed worlds. Now she will be led into a plot to destroy them. 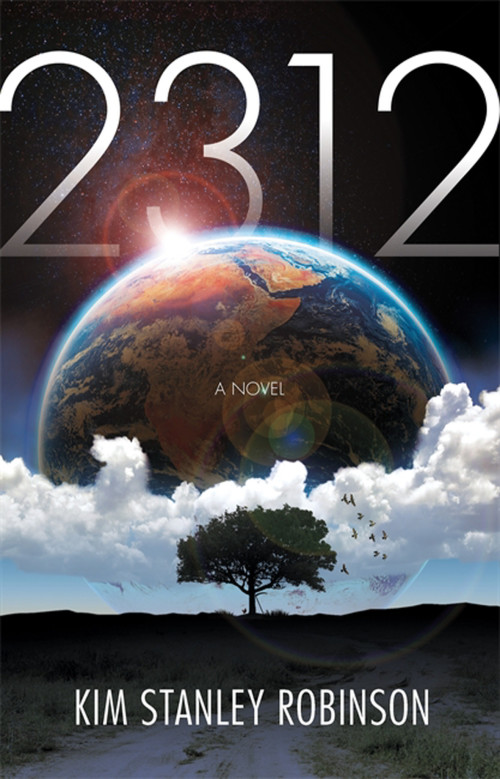 My first idea for this was that there should be a romance between a mercurial person and a saturnine person. Clearly that would be an odd couple, but then aren’t they all. Then I decided the mercurial person should be from Mercury and the saturnine person from Saturn. This may be because I had just read a wonderful review of Galileo’s Dream by Adam Roberts, in which he noted in passing that I appeared to be much too fond of the Greek theory of the four humours or temperaments. This is definitely true, and I thought I would double down by going for an even less reputable theory of personalities.

So I liked the idea, but people living on Mercury and near Saturn implied a civilization spanning the Solar System, and therefore one pretty far out in the future. At that point my editor Tim Holman encouraged me to give that far future the full treatment. That seemed like a good idea, but as I got into the writing I could see there was a problem: how convey lots of information about this solar system-spanning civilization without overwhelming the story?

Some will say I didn’t actually solve that problem, but to the extent I did, it came from a formal solution invented by another writer. I had recently written an introduction to John Brunner’s excellent Stand On Zanzibar, which had solved a similar problem by using the method invented by John Dos Passos in his great U.S.A. trilogy. I had owned U.S.A. for over thirty years, but only at this point did I actually read it. Well, it is a great book. It should be read by anyone with an interest in American history or literature, or in the novel as a genre. To me it’s in the running for the mythical Great American Novel.

What Dos Passos did was to create four different kinds of text, and weave them together. The main one follows a cast of characters that continues to grow through the trilogy. Nothing particularly unusual there, although the size of the cast, and the way these characters bounce through their lives like pinballs in a pinball machine, is notable. But added to that main strand are three others: one tells the biographies of prominent Americans of the period, done as prose poems; another gives us newspaper headlines and first paragraphs of news articles of various kinds, characteristic or revealing or funny, or all of these at once; and the third strand is called “Camera Eye” but actually is the stream of consciousness of a single character, unidentified and always seen from inside, not connected to the main strand stories. It turns out these stream of consciousness passages are mainly Dos Passos’s own experiences. All four strands have a great energy, and a kind of crackpot poetry in them, and they add up to more than the sum of their parts. You feel you have experienced the United States between 1916 and 1930 much more fully than most ordinary novels will allow.

So, I adapted all the strands to my own purposes. My main strand follows my characters Swan and Wahram and Genette. The newspaper columns I turned into extracts from all kinds of unidentified texts, and I cut all these texts into minimal pieces to imitate how we read online, linking from one source to the next as we pursue the information we want. The biographies of famous people I had to alter somehow, because I don’t think pocket biographies of fictional people can be as interesting as the same for real people; so I had my biographies be of moons and planets and big spaceships, as these were in effect historical actors in my story. Then lastly I made the camera eye strand be the stream of consciousness of a quantum computer, put in an android body and let loose in the world for the first time.

Doing all this allowed me to include a lot of information that would have been difficult to get into the plot in normal ways, and it also made the whole thing a lot of fun for me to write. I hoped that would translate into making it fun to read too.

I owe a lot to my editor Tim Holman for giving me the vision, and to John Dos Passos for inventing the method.

Kim Stanley Robinson is a winner of the Hugo, Nebula, and Locus awards. He is the author of nineteen previous books, including the bestselling Mars trilogy and the critically acclaimed Forty Signs of Rain, Fifty Degrees Below, Sixty Days and Counting, The Years of Rice and Salt, and Antarctica. In 2008, he was named a “Hero of the Environment” by Time magazine, and he recently joined in the Sequoia Parks Foundation’s Artists in the Back Country program. He lives in Davis, California.

3 thoughts on “My Favorite Bit: Kim Stanley Robinson talks about 2312”