Katherine Addison is joining us today with her novel The Goblin Emperor. Here’s the publisher’s description.

The youngest, half-goblin son of the Emperor has lived his entire life in exile, distant from the Imperial Court and the deadly intrigue that suffuses it. But when his father and three sons in line for the throne are killed in an “accident,” he has no choice but to take his place as the only surviving rightful heir.Entirely unschooled in the art of court politics, he has no friends, no advisors, and the sure knowledge that whoever assassinated his father and brothers could make an attempt on his life at any moment.Surrounded by sycophants eager to curry favor with the naïve new emperor, and overwhelmed by the burdens of his new life, he can trust nobody. Amid the swirl of plots to depose him, offers of arranged marriages, and the specter of the unknown conspirators who lurk in the shadows, he must quickly adjust to life as the Goblin Emperor. All the while, he is alone, and trying to find even a single friend . . . and hoping for the possibility of romance, yet also vigilant against the unseen enemies that threaten him, lest he lose his throne–or his life.

Katherine Addison’s The Goblin Emperor is an exciting fantasy novel, set against the pageantry and color of a fascinating, unique world, is a memorable debut for a great new talent. 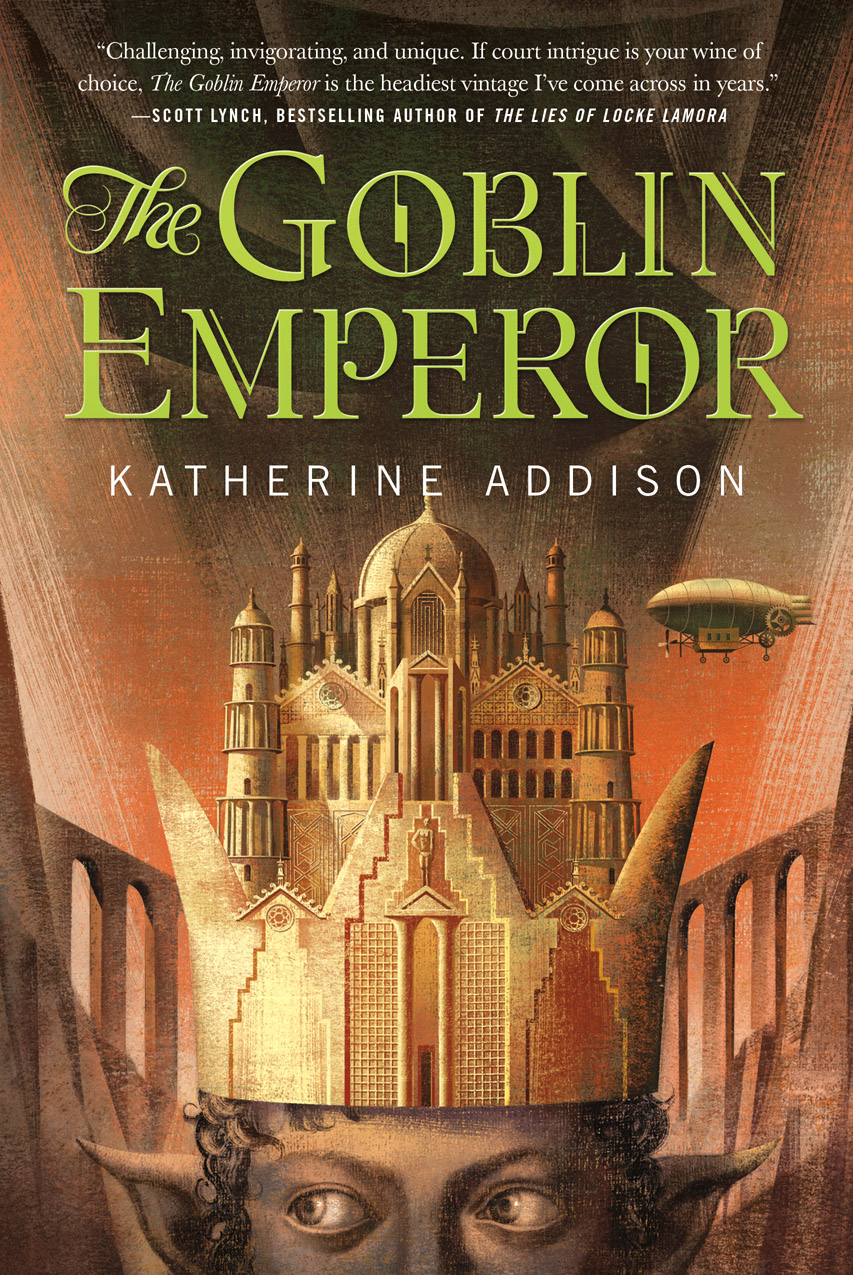 Hands down, my favorite bit of The Goblin Emperor is the traveling coach of the Great Avar of Barizhan:

It was a ponderous monstrosity, painted red and gilded like a samovar, with tremendous staring eyes carved beneath the coachman’s seat, and a mouth like a bullfrog’s cunningly made between them. More carving along the sides indicated elbows and haunches, and there was a spiked crest along the top and down the oddly curved back. The coach was drawn by ten black horses with red and gold enameled harness, perfectly matching the coachman and footmen, pure-blooded goblins in red and gold livery.

The footmen leaped down almost before the coach had stopped moving. They swept a bow to Maia and his entourage and then became very busy setting blocks before the coach wheels and unfolding the steps built into the belly of the coach beneath the door. The Hezhethora advanced to create an aisle, eight men on each side, and their captain mounted halfway up the palace steps and removed his fabulous snarling-faced helmet, tucking it beneath his arm like an extra head. The footmen glanced to see that he was in place, glanced at each other, and one opened the door of the coach while the other stood ready to assist the Avar. All without a word being spoken.

One of the ten black horses stamped a foot.

I very vividly remember writing this scene and realizing that I had a moment where I could just stop and make stuff up. And I remember how amazing that felt.

Making stuff up–not world-building, but the things that make up world-building, inventing clothes and magic systems and novels and ruins–is the best thing about being a fantasy writer, as far as I’m concerned, and the ugly truth is that it’s only part of writing a novel, and not always the largest part, either. Novels have plot and character and theme, a whole suite of things that have to be thought through and balanced and articulated. It is excellent work to be doing, but it is still work, and some days it is brutally hard. I won’t lie; I was not in a good place when I was finishing The Goblin Emperor, and although I loved the novel, most days I wasn’t finding very much joy in my work. And then I reached the arrival of the Great Avar in Cetho, and it was like I had given myself a gift.

When you get to the three-quarters mark of a book, you’re pretty much locked into what’s going to happen and how. You can’t introduce new things that are going to be important to the story because (a) it’s not fair to the readers and (b) it makes your story unbalanced and likely to capsize. Thus, at that point, a scene like this one, the dramatic arrival on-stage of a character who has been discussed and gossiped about and prepared for, becomes an opportunity to expand a little, to indulge the excitement of imagination that was what started the novel in the first place.

Moreover, The Goblin Emperor, as the story of the youngest and least favored son of an emperor who suddenly discovers he has to take the throne, takes place almost entirely in the imperial palace, the Untheileneise Court. There are very good reasons for that, and the fact that it makes the story a little claustrophobic is intentional. But it became claustrophobic for me, as well, so the arrival of the Great Avar was exciting simply for the chance to write about something new, something that we hadn’t seen before and something that didn’t share the aesthetic of the palace. And I love what his traveling coach suggests about coach-making in Barizhan and what gigs and phaetons and curricles might look like. The Great Avar’s coach (and the snarling helmet of the Hezhethoreise captain) made me happy at a time when I needed it. It was a chance to play in the middle of a long grim stretch of work.

And of all the things I’ve ever dreamed up, the Great Avar’s coach is the one I most want someone to make a model of.

A Room of One’s Own

Sarah Monette grew up in Oak Ridge, Tennessee, one of the three secret cities of the Manhattan Project, and now lives in a 108-year-old house in the Upper Midwest with a great many books, two cats, one grand piano, and one husband. Her Ph.D. diploma (English Literature, 2004) hangs in the kitchen. She has published more than fifty short stories and has two short story collections out: The Bone Key (Prime Books 2007–with a shiny second edition in 2011) and Somewhere Beneath Those Waves (Prime Books, 2011). She has co-written two novels with Elizabeth Bear, and they are working on a third. Her first four novels (Melusine, The Virtu, The Mirador, Corambis) were published by Ace. Her latest novel, The Goblin Emperor, published under the pen name Katherine Addison, came out from Tor in April 2014. Visit her online at www.sarahmonette.com or www.katherineaddison.com